The last class to graduate from Solon High School was the class of 1969. This class always shows up in large numbers to celebrate. This year they had seven members show up to celebrate 47 years. They were Reggie Padham, Arthur Myers, Penny Rogers McQuilkin, Linda Stickney Steward, Dana Parsons, Bobbie Tewkbury Proctor and Jo Rancourt Holden.

An auction was held and $415 was raised for the scholarship fund. This money was matched by Reggie and Brenda Padham. They wanted to insure people that their money would be safe and used for what it was intended for. Betty Heald was the auctioneer.

A luncheon was held and catered by the Solon Pine Tree 4-H Club under the direction of Eleanor Pooler.

Sorry, but this is all I could gather up for news this week, with people not wanting any of their personal news printed anymore, it makes it tough. But…Percy is still able to help out with some pleasing memoirs…May you have enough happiness to keep you sweet. Enough trials to keep you strong, Enough sorrow to keep you human; Enough hope to keep you happy; Enough failure to keep you humble; Enough success to keep you eager; Enough friends to give you comfort; Enough wealth to meet your ne3eds; Enough enthusiasm to look forward; Enough faith to banish depression; Enough determination to make each day better than yesterday. 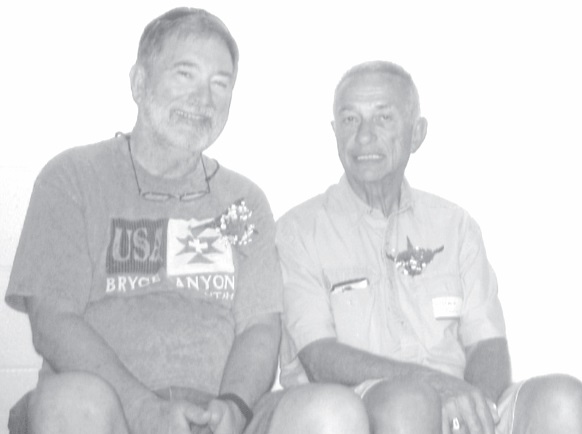 Mark Rogers, left, of Florida, and Richard Poulin, of Oklahoma, were the only two members of the Solon’s class of 1966 to attend their 50th reunion, on July 23. Photo courtesy of Marilyn Rogers-Bull

LakeSmart comes to Sheepscot IF WALLS COULD TALK, Week of July 28, 2016
Scroll to top