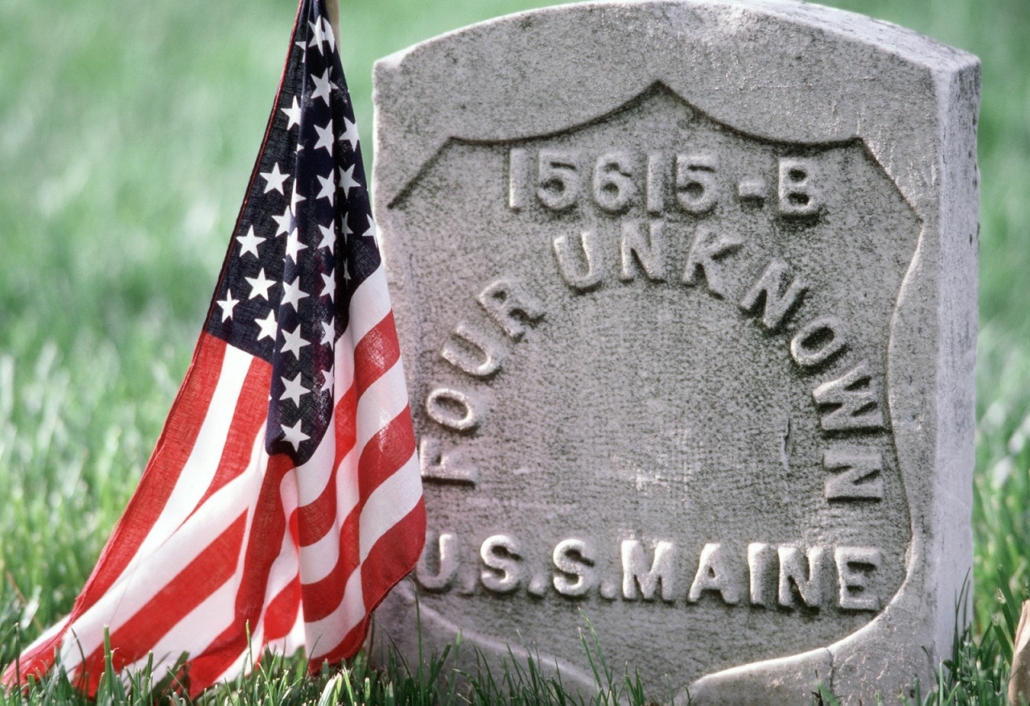 A close-up view of a tombstone at the Arlington National Cemetery, marking the grave site of four unknown crewmen assigned to the battleship USS MAINE (BB 2). The Marine sank after exploding off the coast of Havana, Cuba, killing approximately 260 crewmen. The sabotaging of the main precipatated the American declaration of war against Spain in 1898.

Memorial Day is a federal holiday which is celebrated on the last Monday of May, each year. To me Memorial Day indicates a day of memory. In our case it is the American realization that our freedom isn’t free at all. Young men and women have gone to war to protect the American way of life for several centuries now.

Fortunately, for those who did not serve in a military capacity had the support of those who would give their all to protect this great country and the residence who resided in the place they called home. This day is full of “do’s and don’ts”. The don’ts are what we need to avoid. Research shows five things we should not do on Memorial Day;

It’s very important to remember we are not celebrating veterans here; we are memorializing those who gave their lives. In 1868 General John Logan declared the day for paying respect to “those who have died”, defending our way of life with flags and flowers. As you can see there is an important distinction. Thank you for your service and wish you were here are very different. Even though some of us may disagree with the politics of war; that is not the issue of the holiday. We are showing thanks for our existence and respect for those who died securing that. No one could give more than his/her life for family, friends and country.

Historically our flags are flown at half staff from dawn until noon. You can put flowers on the grave of any fallen hero. It is customary to pause at 3 p.m. and say a little prayer. Wearing a red poppy is a symbol of respect which began early on when Memorial Day was known as Decoration Day. (May 30, 1868).

The Ohio Congressman and future president, James Garfield gave the first speech which took place at Arlington National Cemetery. This began as a Civil War event, in which over 620,000 men and women died. Later this was expanded to include all wars. Remember, Veterans Day honors all that have served in the armed forces but Memorial Day honors those who gave their lives. The late Billy Graham said, “Courage is Contagious”. When a brave man takes a stand, the spines of others are stiffened. President James Garfield stated, “For love of country they accepted death.” Nathan Hale stated, “I only regret that I have but one life to lose for my country.”

There are so many famous quotes surrounding this holiday. “In Flanders Field” probably is the greatest of them all. It was written by a Canadian physician during World War I, Lt. Colonel John McCrae. McCrae was inspired to write the poem while presiding at the funeral of a dear friend. Later he discarded the poem believing it to not be good. It was retrieved by another and published giving credit to McCrae.

In Flanders Field was first published on December 8, 1915. It is one of the most quoted poems to this very day, and applies to all conflicts of war and has even been used in advertising. In the U.S.A. we use it with Veterans and Memorial days. It was used as a recruiting tool during the romance period of war and was written in order to give a voice to the dead. A simple wooden cross in a field of poppies is where it received the breath of life from the mind and hand of one trained to save life. Bury your friend with a raincoat for cover. War is hell. When will we ever learn? Don’t forget this and be sure to pause at 3 p.m., and whisper your prayer. The world is in a bad place, even now. Enjoy your day off with friends and family and remember those who have allowed you to do that.

The Larks, still bravely singing, fly
Scarce head amid the guns below

We are the dead. Short days ago,
We lived, felt dawn, saw sunset glow,
Loved and were loved, and now we lie
In Flanders Fields.

Take up our quarrel with the foe:
To you from failing hands we throw
The torch; be yours to hold it high
If ye brake faith with us who die
We shall not sleep, though poppies grow
In Flanders Field.