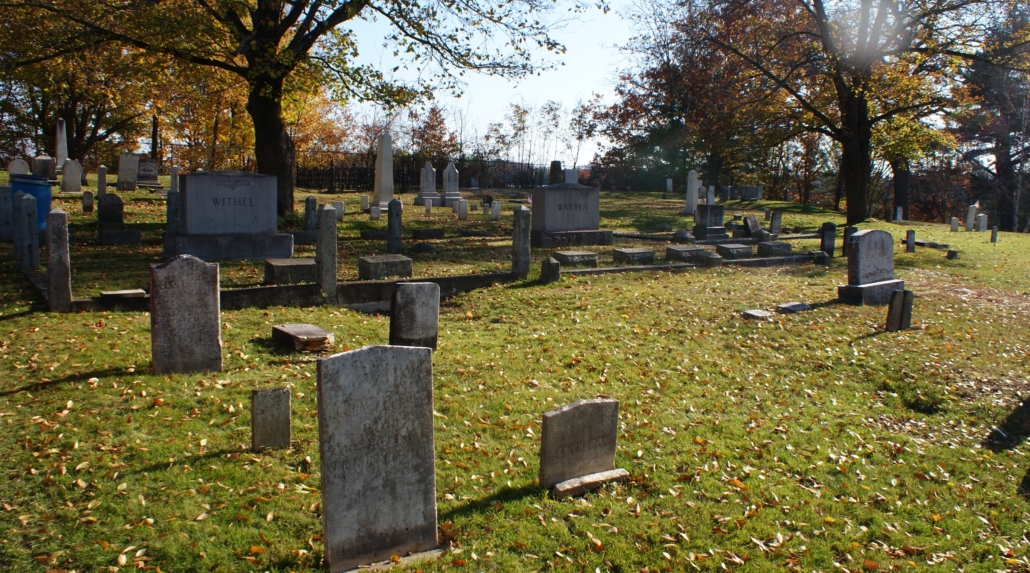 As anyone who has lived in Winslow for any length of time can tell you, Fort Halifax was built by the English in the middle of the 18th century on the point of land where the Sebasticook and Kennebec Rivers meet. All that is left of it today is the solitary block house on the southeast corner where the fort had stood. The block house floated down the Kennebec River in the flood of 1987 and returned in pieces to be reassembled by local citizens. It now stands as our town’s symbol, incorporated into stationary, logos, websites and other town-related items.

The fort grew, diminished, and grew again to where it had, at one time or another, covered most of what is now Winslow’s Fort Halifax Park. The park has suffered through floods and mini-tornados, endured many ownership changes, and hosted several commercial enterprises, including lumber businesses and a used car lot in the 1950s. Now it is Winslow’s premiere park, a place for family recreation, weddings, parties, and, more recently, outside meetings with members sitting in a circle, spaced six feet apart.

Early in the fort’s history, two smaller block houses known as redoubts, connected by a palisade walkway, were built on the top of Fort Hill, presumably to maintain an elevation for monitoring the traffic going up and down the Kennebec or Sebasticook.

What some people do not realize, however, is that a portion of what had been the fort became what we know today as the Fort Hill Cemetery. In 1772, a committee was appointed by town officials to obtain a plot of land on the hill to hold the first public burial ground in Winslow. Three acres or so were donated by Dr. Sylvester Gardiner, a physician and land developer.

While the cemetery was established in 1772, the first burial was not recorded until 1789 when Timothy Heald, a Captain in the Revolutionary War, was interred there. During those intervening 17 years, many residents of Winslow and surrounding towns may well have been buried in the cemetery. They may not, however, have been listed in the town’s vital records beginning in 1771 when Winslow became a town. The earliest residents may have simply been buried in the southern part of the cemetery, without any record of their passing or grave stone to mark their resting place. Others may have had a simple, unadorned field stone or an engraved marker which has either disintegrated or fallen and been overgrown by grass and other plant material. Family genealogists scattered all over the country may be the only people who know about these early residents and their place of burial.

Today, approximately 450 people are buried in the cemetery, only a few of them without a marker. During the past year, members of the Winslow Cemetery Committee along with local volunteers have lifted or uncovered about 50 stones, some completely buried from view and others partially covered with grass and dirt. Members of the Fort Halifax Chapter of the Daughters of the American Revolution have also helped by repairing and cleaning the grave stones of veterans of the American Revolution. 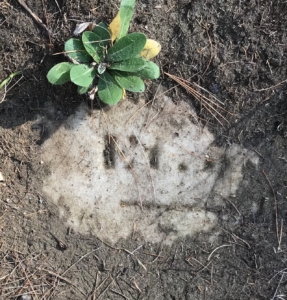 Buried tombstone of Augus Woodman. “Aet” is Latin abbreviation for “age”. “A” is no longer visible.

While using a leaf blower, a volunteer accidentally uncovered a small area of stone about three inches square. After carefully exposing the entire stone using plastic scrapers, trowels, wooden popsicle sticks and, of course, fingers, the head stone of …ugus (possibly Augusta or Augustus) Woodman, came into view. The top of the stone had broken off prior to the 1930s and the rest of it was badly deteriorated so that identifying its possible owner involved a fair amount of detective work and creative eye squinting.

The lettering on many of the stones in Fort Hill is badly degraded, while other stones are covered with a black, tar-like substance, probably from paper mill pollution and exhaust from trucks climbing the hill. Others have been broken into pieces by frost and possible vandalism. The lichen is easily scraped off, but most stones have required scrubbing with water and biological solutions in order to read just the names and dates of death. A few stones have been completely cleaned and restored to their former beauty, but more work is needed.

Searches have been made in the Town of Winslow Vital Records, Ancestry.com, and FindAGrave.com, along with records of the Maine Old Cemetery Association (MOCA), hoping to identify folks buried in Fort Hill. This work has also involved identifying those who are not interred there, and moving them, figuratively, to other burial grounds in the area as recorded by MOCA or FindAGrave.

On a beautiful, clear autumn day, one can stand behind the graves of Nelson and Carrie McCrillis, and, looking west across the whole of the cemetery, see the Kennebec as it flows by Winslow’s park. Or standing in front of the back fence behind the stone of Capt. Timothy Heald, and his wife, Abigail, one can look toward the south east to the Sebasticook River as it makes its way toward its junction with the Kennebec. And if one were to squint his or her eyes in just the right light, they might even see a pair of Abenaki Native Americans paddling silently down the river, on their way home from a long day of hunting. 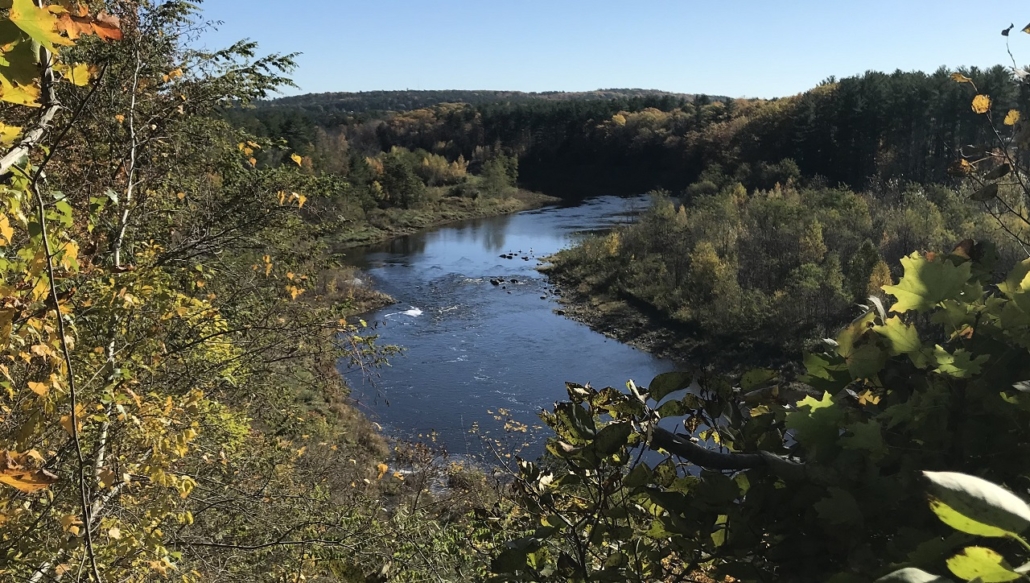 View from behind tombstone of Capt. Timothy Heald, looking southeast toward the Sebasticook River.