It flashed by quickly. While driving down the Bog Road, in Vassalboro, recently, a streak of blue passed directly in front of my Jeep, near the Vassalboro Community School. It was a blue-colored bird, that looked on the small side, and it was gone in an instant. The blue was the most brilliant I have seen on a bird. 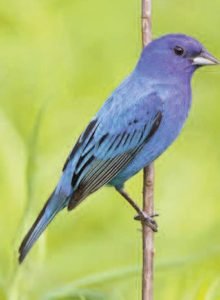 “Indigo bunting,” was the first thought that went through my head. But this bird showed a small area of red or orange and yellow under its wings along the breast area.

An Indigo bunting, Passerina cyanea, is a small bird, and the males are a vibrant blue during the summer months. However, during the breeding season, only the head is indigo. The wings and tail are black with blue edges. The female is brown on the upperparts and lighter brown on the underparts.

Its habitat is brushy forest edges, open deciduous woods and second growth woodland and farmland. Precisely the habitat surrounding the area I spotted the bird.

But no red/orange or yellow are present on this bird. 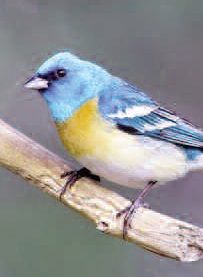 The Indigo bunting is closely related to the lazuli bunting, which has markings of red and yellow, and will interbreed where their ranges overlap, in the Great Plains. So the lazuli bunting was quickly eliminated from consideration because it occurs only west of the 100th meridian, through the Rocky Mountains and the Pacific coast.

What else could it be?

Well, the last thing to pop into my head probably is what I saw. The Eastern bluebird, Sialia sialis, a member of the thrush family, is also found in woodlands, farmlands, and orchards. It occurs east of the Rockies, southern Canada to the Gulf states, and southeastern Arizona to Nicaragua. The increase in its move to the western range during the past century is due mostly to fire suppression and tree plantings.

The male bluebird is a brilliant royal blue on the back and head, and red-brown on the breast. Exactly what I saw that day. It is the most widespread of the three bluebirds.

Bluebirds are very social birds. They gather in flocks of a hundred or more, but are territorial during the breeding season. 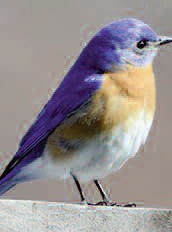 Two-thirds of the bird’s diet consists of insects. But they will supplement their diet with fruits, especially when insects are scarce in the winter. The availability of winter food will determine whether or not the bird will migrate. If they remain in the region during the winter, they group and seek cover in heavy thickets, orchards, or other areas in which adequate food and cover is available.

Females will generally have two broods per season. The female incubates the eggs for about 13 – 16 days, then both parents cooperate to raise the young. The chicks will fledge at 18-19 days old.

During the summer, bluebirds can be seen sitting on power lines.

The Eastern bluebird had seen a period of serious decline in many areas due mostly to the loss of habitat and nesting sites. However, thanks to the increase of birdhouses in many areas, the species is making a comeback. Today, the International Union for Conservation of Nature (IUCN) lists the Eastern bluebird as a species of least concern with an increasing trend.

I haven’t seen many Eastern bluebirds in my travels, but I wish I could see some more close up than I did that day. And maybe it could sit still for a while so I could enjoy it.

The chickadee that took up residence in a birdhouse behind our camp, that had been vacant and abandoned for the better part of a decade, was sighted again a couple of weeks ago. Well, this weekend, we watched an extreme amount of activity around the birdhouse as both the male and female were spotted at the same time entering and exiting. There must be young ones in there, was our thought. Well, Saturday, we watched as four young birds flew out of the box.

The only other question we had was, once the young leave, do they come back to the nest for a while. It seems the two parents are still feeding something inside the box.