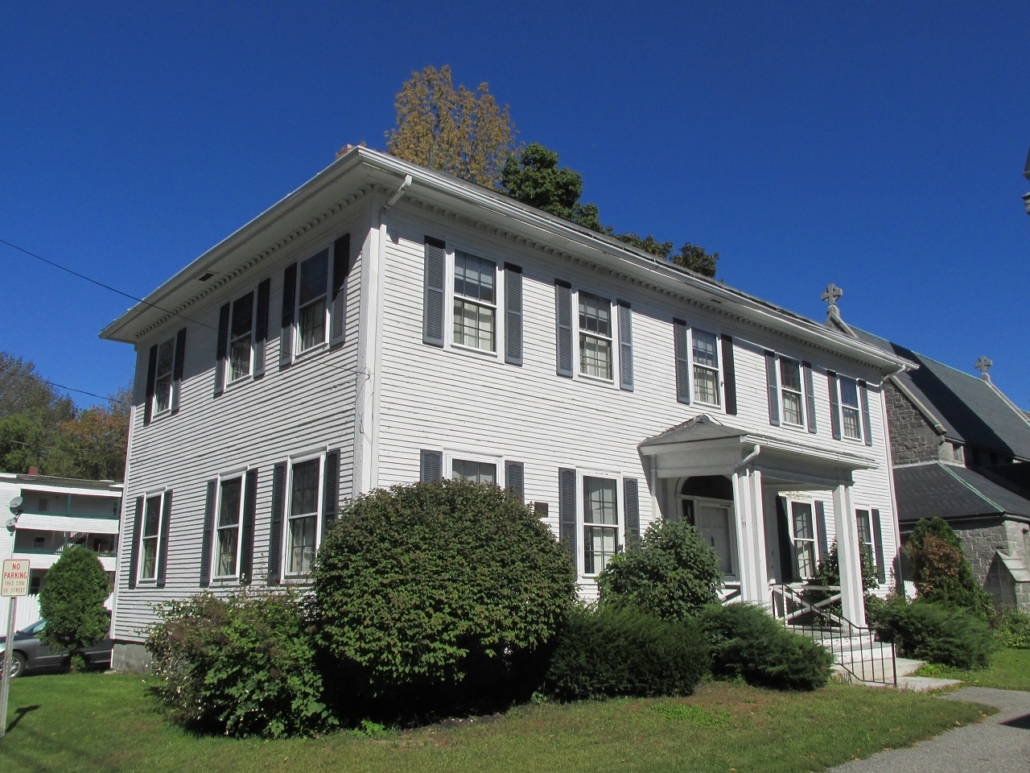 The Fuller-Weston House in Augusta.

In the June 10 issue of The Town Line, readers learned about three of the four Augusta church buildings that have gained recognition on the National Register of Historic Places. The fourth, and an associated building, are described herein.

The building that used to be St. Mark’s Church, at 9 Summer Street, in Augusta, was built in 1886 and, Kingsbury wrote in his Kennebec County history, consecrated Feb. 2, 1887. It was the second home for an Episcopal congregation organized in 1840; the first was a small wooden church Wikipedia says was a little north of Lithgow Library. Kingsbury said the first building was consecrated July 20, 1842, and “greatly enlarged” in 1858. 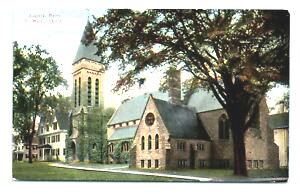 Rev. Walker Gwynne was St. Mark’s rector from Jan. 17, 1884, to at least 1892, when Kingsbury’s history was published. He was the author of a Manual of Christian Instruction, According to the Church Catechism, Adapted to the Christian Year, and in Four Uniform Grades. The Manual was published in London and reprinted in New York. It has an introduction by the Very Rev. R. W. Church, M.A., D.C.L., Dean of St. Paul’s, London; and an endorsement by John Fredericton, Metropolitan of Canada.

Architect Richard Michell Upjohn designed St. Mark’s granite Gothic Revival building with its slate roofs. The main section, with a steep gable roof topped with crosses, has a large window, in 10 sections, under a pointed arch in the east end.

Near the east end, an almost-square lower annex with another steeply-pitched roof has a round window above three arched ones in its south face. A brick chimney rising well above the roofline marks its western junction with the center of the main building, by the main entrance.

Near the west end, a tall square tower with what look like louvers in its upper level rises to a four-sided roof with a cross atop its peak. Wikipedia says the belfry is in the tower.

Richard Michell Upjohn (1828-1903) was the son of a British emigree architect, Richard Upjohn. The son joined his father’s firm in New York in 1853 and later became his father’s partner. 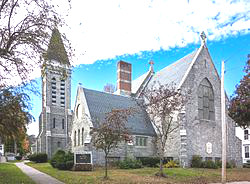 Wikipedia says his earliest commission was probably New York City’s 1853-1854 Madison Square Presbyterian Church. He designed many other churches, working mostly on the east coast but doing an Episcopal church in La Grange, Texas, in 1855. Other buildings he designed included the First National Bank, in Salt Lake City, Utah (1871), and the Connecticut State Capitol, in Hartford, Connecticut (1871-1878).

Maine Historic Preservation Commission architects Frank A. Beard (who also did the South Parish application in 1980; see the June 10 issue of The Town Line) and Roger G. Reed wrote the May 1984 application for National Register status for St. Mark’s. They wrote that as of that spring, the church interior was “unaltered since its construction.”

With evident pleasure, they described particularly striking aspects. “Large marble columns with stone palm leaf capitals support lancet arched arcading flanking the nave. …The pulpit is panelled wood with a hand-wrought copper railing shaped in a floral motif. The ceiling of the chancel is painted with original stenciling.”

They also mentioned the “screens carved with openwork Gothic tracery” and the stained-glass window brought from the earlier church and placed above the choir.

The building deserved historic listing because it was an outstanding example of Gothic architecture, the two historians wrote. “No other church in the area conveys a similar rusticity and none has a more carefully worked interior.”

Wikipedia says the Saint Mark’s congregation supported community services, like groups supplying food and clothing, and musical events. The latter included an annual organ concert that from 2010 was named the Marilyn Tedesco Memorial Concert, to honor a former organist and music director.

In January 2015, the St. Mark’s congregation began worshiping in Prince of Peace Lutheran Church, because they could no longer afford to maintain their own building. They put St. Mark’s church on the market in 2016. Social services continued to operate from the 1908 parish house, according to a Dec. 22, 2014, Central Maine newspapers story by Craig Crosby.

The former St. Mark’s Church was added to the National Register on July 19, 1984. The parish house was not included in the application.

However, the building at 11 Summer Street that served as the rectory for St. Mark’s Church has a separate listing as the Fuller-Weston House. Historians Beard and Reed filled out its application in January 1984 and it was added to the National Register on March 22, 1984.

The two-story wooden house with a Federal-style door in the center of its south-facing, five-bay front is just west of the former church. Built in 1818, it is recognized not only for its architecture, but also for three early owners.

The senior Fuller became a wealthy man as the value of his land increased. Beard and Reed wrote that he represented the Plymouth Proprietors (the British-chartered landholders who owned part of Maine) as a lawyer, served in “the General Court” (presumably the Massachusetts General Court before 1820) and was a Maine Militia Colonel and “eventually” a Kennebec County judge of probate.

Frederic and Catherine divorced shortly afterwards, and Melville Fuller lived with his grandfather Weston in the Fuller-Weston house until he left for Bowdoin College, from which he graduated in 1853. Two years later he graduated from Harvard Law School; in 1888, President Grover Cleveland appointed him Chief Justice of the United States Supreme Court.

In their application for inclusion of the Fuller-Weston house on the National Register of Historic Places, historians Frank A. Beard and Roger G. Reed wrote that Supreme Court Chief Justice Melville Weston Fuller was “highly respected as a jurist.” They mentioned several important issues that came to the Supreme Court during Fuller’s tenure, including income taxes and immigration.

They did not mention “Plessy v. Ferguson”, the 1896 case that created what became known as the “separate but equal” doctrine for United States white and colored citizens. In 1954, the “Brown v. Board of Education” ruling overturned “Plessy”.

Fuller was part of the seven-man Court majority. (Justice John Marshall Harlan’s dissent contained the statement that “the Constitution is color-blind.”)

In Augusta 2013, a bronze statue of Fuller was erected in front of the historic Kennebec County Courthouse, on State Street, in Augusta.

Commissioned and funded by Robert Fuller, Jr., an indirect descendant of the former Chief Justice, and approved by the Kennebec County Commissioners a year and a half earlier, the statue was sculpted by Forest Hart, of Monroe. Tony Masciadri of S. Masciadri & Sons, in Hallowell, provided the granite base.

Kennebec Journal reporter Betty Adams attended the installation. The statue shows Fuller “seated and robed and looking much like Mark Twain” on the “front lawn of the Kennebec County Courthouse, welcoming all,” she wrote for the Aug. 14 issue of the newspaper.

Among those at the ceremony were Maine Supreme Judicial Court Chief Justice Leigh Saufley (who retired in 2020) and Daniel Wathen, Chief Justice before Saufley. Adams quoted from Saufley’s speech, which did refer to “Plessy”.

After calling Fuller ” ‘an Augusta boy [who] made good,’ ” Saufley “praised his administrative skills and emphasis on collegiality” among his Supreme Court colleagues. She then called “Plessy” “one of the [Supreme Court’s] most reviled decisions.”

Fuller’s joining the majority in the case “is a good reminder that respected, capable people can do something that is so flatly wrong,” Adams quoted Saufley as saying.

By the summer of 2020, the statue became controversial. A series of Kennebec Journal reports by Rob Montana and Jessica Lowell followed developments.

The Maine Judicial Branch, in an Aug. 5 letter signed by Maine Supreme Judicial Court Acting Chief Justice Andrew Mead (Saufley’s interim successor), asked Kennebec County Commissioners to consider removing the statue. Mead wrote that the “Plessy” decision was not consistent with state values, and that it was inappropriate for the Fuller statue to be “the monument that members of the public see as they approach the courthouse.”

Kennebec County Commissioners held a hearing on the future of the statue in December 2020. In February 2021, they voted to have it removed, and created an advisory commission to suggest where it might go.

On April 20, the Commissioners made the advisory commission’s role superfluous by voting unanimously to accept Robert Fuller’s offer to take back his gift. Commissioners “sold” it to him for $1 and gave him 12 months to remove and rehome it, at his expense.

Reporter Lowell wrote that advisory committee members hoped the statue would be placed where its “educational value” would be preserved. They had suggested giving it to the Maine State Museum, but Lowell said Museum Director Bernard Fishman said the museum had no money to buy it or to store it while renovations to the museum building are finished.