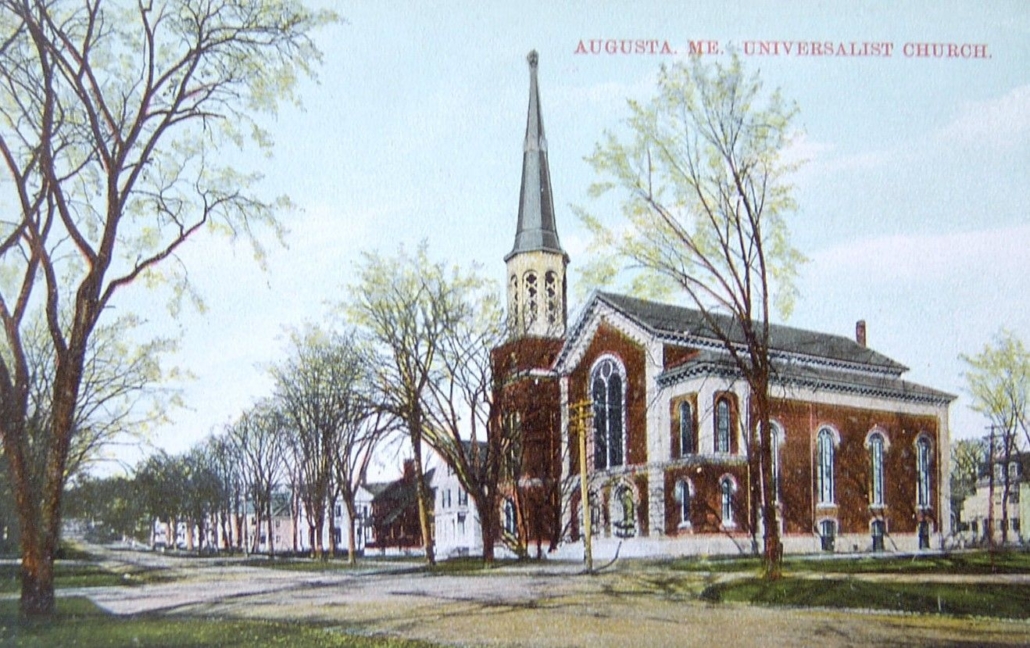 Having finished summary histories of Grange organizations in the central Kennebec Valley in The Town Line issues beginning April 8, and a two-part description of aspects of the Goodwill-Hinckley School, in Fairfield, this writer now turns to a different type of organization, the church. The focus will be not on the organizations, but on the buildings they acquired or constructed that have been listed on the National Register of Historic Places.

Why not the organizations? For three reasons: there are too many of them; many have complicated histories of relocations, schisms and mergers; and most have been covered in other histories, of religion, of specific religions and of Maine towns and cities. 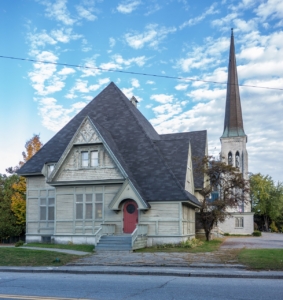 The South Parish Congregational Church, United Church of Christ, was built in 1865, as the new home of a congregation established in 1773. The church and its Parish House were added to the National Register of Historic Places on June 22, 1980.

Kingsbury, in his 1892 Kennebec County history, wrote that Congregational Church members started their first meeting house in 1782 in Augusta’s future Market Square, while Augusta was part of Hallowell. The building was used beginning in 1783, though it was not finished until 1785.

When the towns separated in 1797, the meeting house was included in Augusta’s south parish. The original meeting house was used for 26 years. When Kingsbury wrote, it had been moved repeatedly and was then on Winthrop Street and had become the Friends’ chapel.

A second meeting house was started in July 1807 and dedicated December 20, 1809. Kingsbury quoted a description of its location: on Judge North’s land, near a grammar school, “on the east side of the street leading to the Court House.” This church was struck by lightning July 11, 1864, and burned down.

An on-line site says the Sunday after the fire the congregation, led by minister Alexander McKenzie (1830-1914), decided to rebuild, with non-flammable materials. McKenzie graduated from Harvard College and Andover Theological Seminary; he was ordained in Augusta and served at South Parish from 1861 until he transferred to Cambridge, Massachusetts, in 1867 for the rest of his life.

The church hired Portland architect Francis H. Fassett (1823-1908), who also designed the Williams Block and the Whitehouse Block in the Water Street Historic District (see the Feb. 4 and Feb. 18 issues of The Town Line). His plan was approved within three months, and the new church was dedicated on July 5, 1866.

The Gothic Revival building is of granite with a slate roof. The south-facing front is in three sections.

On the west end, a tall tower of three vertical sections, with large windows set in Gothic arches, houses the belfry. The tower is topped by an octagonal steeple. On the east end is a shorter three-story tower with no steeple.

Between the two towers, the main section features a front entrance with recessed doors set in another Gothic arch. Above the entrance is a tall stained-glass window; and above that, as the building rises to a point, a small round window.

Frank A. Beard and Robert Bradley, who wrote the Maine Historic Preservation Commission’s 1980 application for historic register listing, said the building’s side walls each have six bays. On the ground floor, they are separated by buttresses and contain stained-glass windows.

On the upper level, “each bay is a pair of recessed lancets below labelled lintels.” Wikipedia defines a lancet, in architecture, as “a type of pointed arch,” and says lancet windows were common in 13th-century Gothic architecture in England. A lintel is the beam that covers the top of a window or door and bears the weight of the wall above the opening.

There is a large rose window in the end of the sanctuary, and “a large pipe organ, beautifully decorated, which was installed when the church was built.” E. and G. G. Hook, of Boston, built the organ.

(The Hook company, formed by brothers Elias Hook and George Greenleaf Hook, built more than 2,000 pipe organs between 1827 and 1935. The Hooks retired in 1881; their partner, Frank Hastings, continued the business.)

The Parish House was added in 1889 and dedicated in 1890. It is a story and a half wooden building designed by Augusta architect James H. Cochrane in the Stick Style, which Beard and Bradley wrote is “comparatively rare in Maine.”

In 1963 a single-story addition and passage connected the parish house to the church. Its slender windows in pointed arches match the church windows. Beard and Bradley wrote that although the addition was comparatively new, “its low profile and simple design are no detraction” from architectural significance of the buildings.

The South Parish Congregational Church hosts the Amy Buxton Pet Pantry, which provides cat and dog food to area residents and useful information about pet care on its Facebook page (and welcomes donations). Summer hours start June 12; the pantry will be open from 9 to 10 a.m. the second Saturday of each month. 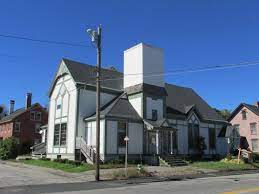 The former All Souls Church, at 70 State Street, in the northwest corner of the intersection with Oak Street, is the next oldest of the four Augusta church buildings on the National Register. It was built in 1879, Wikipedia says, as the third place of worship for a Unitarian congregation that started in 1825.

Kingsbury wrote that the first Unitarian church building, dedicated Oct. 18, 1827, was Bethlehem Church, on the east side of the Kennebec River, where the Cony Flatiron Building (formerly Cony High School) now stands. The second, on Oak Street, was dedicated Oct. 17, 1833.

The third All Souls building is another example of Stick Style architecture. The architect was Thomas William Silloway (1828-1910) of Massachusetts, who was also, from 1862 to 1867, a Universalist minister.

Silloway’s architectural specialty was church buildings; he is said to have designed more than 400, “more church buildings than any other individual in America.” An on-line source says he was commissioned to supervise restoring six churches in Charleston, South Carolina, after an 1886 earthquake.

He also designed school and college buildings; libraries; asylums; the Vermont State House, in Montpelier; town halls and other public buildings; and private homes. Wikipedia credits him with designing Memorial Hall, in Oakland, Maine, built in 1870.

The Brighton Allston (Massachusetts) Historical Society published on line an article about Silloway by historian Dr. William P. Marchione. Marchione wrote that Silloway was only 29 when he was hired to rebuild the Vermont State House after a fire. He quotes later and more famous architect Stanford White (1853-1906) as calling the building “the finest example of Greek Revival architecture in the country.”

However, Marchione wrote, Silloway’s insistence on using the most expensive materials led to his being fired from the project before it was finished. The University of Vermont’s giving him an honorary M. A. in 1862 might have been intended as compensation, Marchione suggested.

The UUCC’s main building is at 69 Winthrop Street. In the fellowship hall, the website says, are paintings by local artist David Sillsby, including one of “All Souls Unitarian Church building on State Street. (The building is still standing without the steeple.)”

Cally Stevens, “a long-time member of UUCC from All Souls Church (deceased)” donated the painting, the web page says.

All Souls Church was listed on the National Register of Historic Places on Jan. 31, 1978. 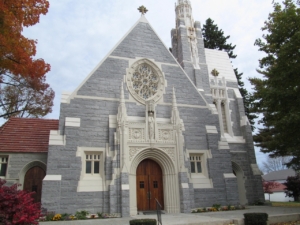 The newest of the four Augusta churches on the National Register is St. Mary of the Assumption, a Roman Catholic Church at 41 Western Avenue (almost across from the Augusta post office). The church was built in 1926 and granted historic status on June 12, 1987.

In nominating St. Mary’s for recognition, historian Kirk F. Mohney (now Director of the Maine Historic Preservation Commission) said “the handsome and richly decorated Gothic building” was “among the most architecturally significant religious edifices in Augusta.”

St. Mary’s was designed by O’Connell and Shaw of Boston, whose partner Timothy G. O’Connell (1868-1965) designed many other Catholic school and church buildings in Maine, including St. Augustine, on Northern Avenue, in Augusta, and Sacred Heart, on Pleasant Street, in Waterville. The Louis Milo Company, of Lewiston, built the church.

Mohney wrote that the long nave has space for 850 people. He described many of the building’s features – the bell tower on the southeast with its “richly detailed louvered belfry” and its “image of Mary Queen of Peace” below eight pinnacles at the base of an octagonal spire; the memorial windows on both sides of the nave; the coffered ceilings and the octagonal pulpit.

Other on-line sources join Mohney in praising the elaborate entrance, with the wooden doors inset from “an ornate buttressed porch with corner spirelets and an image of the Immaculate Conception.”

St. Mary of the Assumption remains in use as a house of worship, part of St. Michael’s Parish.