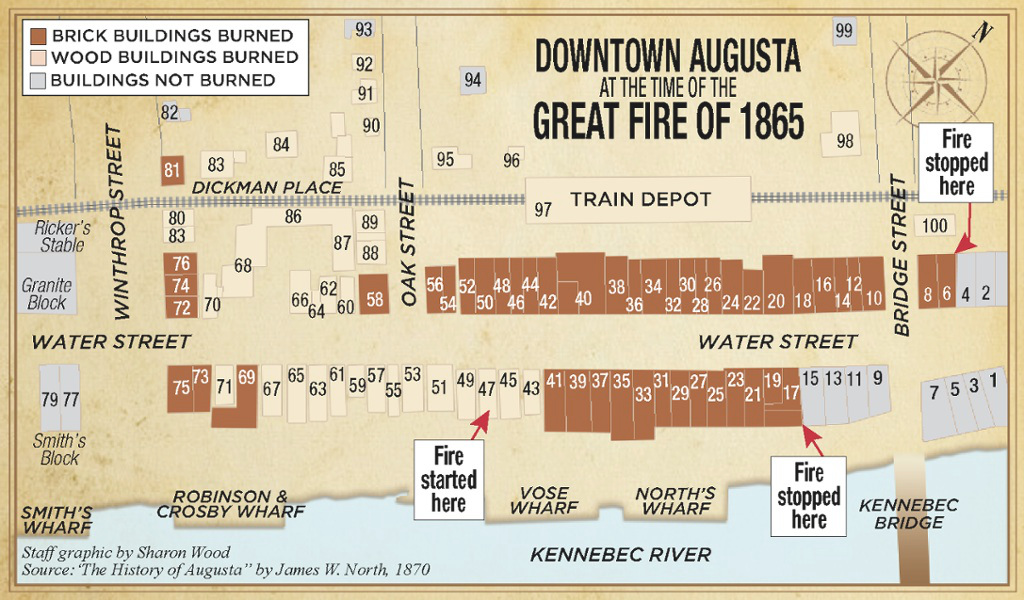 The City of Augusta’s list of designated historic places includes four districts. The Water Street district, supplemented by recognition of individual buildings, covers a good part of the main business street that parallels the Kennebec River on the west bank.

The district is described as running from the Commercial Street intersection south to the old courthouse and post office at 295 Water Street, which is individually listed and was described previously (see The Town Line, Jan. 7).

Wikipedia says the Calumet bridge, built in 1973, was until 2009 the Father Curran Bridge. It was named after Rev. John J. Curran, who served from 1962 until 1972 at St. Augustine Church and who died in 1976. The legislature renamed the bridge after two claims of sexual misconduct were raised against the late priest and one was found credible.

The Water Street district was listed in 2017. Wikipedia says it qualified as a Historic District because it has a concentration of 19th-century commercial buildings, built “to serve an economy based on water transport and state services.”

The first three individually listed buildings on the east (river) side of Water Street, running from north to south, are as follows:

The Colonial Theater at 139 Water Street is the second incarnation of the second theater on the site. The original one burned in a 1912 fire that also destroyed nearby buildings; the new one succeeded it in 1913. It was designed by Harry S. Coombs (1878 – 1939), a Lewiston architect. Coombs’ building was heavily damaged in another fire in 1926 and was promptly repaired and expanded.

Wikipedia describes the style as Beaux Arts and Georgian Revival and says the 1926 version added Art Deco features. The building is brick on a concrete foundation, two stories high, large enough to cover most of the space between Water Street and the Kennebec River. The center section has three ground-level doors; a parapet raises the central roof above the level of the two side roofs.

The building was used as a theater until 1969. In its early days it showed silent films with a live orchestra accompanying them, including premiering silent films by Vassalboro native and author Holman Day (1865 – 1935). 1Seating capacity was over 1,200 people.

After the theater closed it was used for occasional events and for storage. On Oct. 8, 2014, it was added to the National Register of Historic Places as the longest lasting and most important theater in downtown Augusta and “an eclectic example of early 20th century design by a noted architect.”

A Dec. 2, 2019, Kennebec Journal article by Keith Edwards describes on-going restoration efforts, which began inside and by December 2019 involved straightening the parapet, which had leaned over the sidewalk, and repainting the front its 1926 yellowish-brown color. The project cost was estimated at up to $8.5 million.

On Sept. 16, 1865, a fire repeatedly described as the most destructive in Maine to that time destroyed almost the entire downtown area, from the wooden bridge across the Kennebec (built after the original bridge washed out in 1837, predecessor of the Calumet bridge) south to Winthrop Street and from the riverbank west across the railroad track that runs on the uphill side of Commercial Street.

Contemporary accounts, notably one in The New York Times, say more than 40 buildings housing more than 100 businesses and office were des­troyed (a later report said 80 buildings were destroyed and 20 more damaged). Losses were estimated at half a million dollars, not all covered by insurance.

Among the burned buildings were the post office, telegraph office and express office; an unfinished railroad depot; the federal “Quartermaster, Commissary and Pension Offices”; two hotels; all the city’s lawyers’ offices and banks (the banks saved their records and money); and all the miscellaneous retail businesses.

Wikipedia says Fassett designed the building for Reuel Williams, a prominent 19th-century Augusta businessman and politician. The Williams Block is a comparatively subdued example of Fassett’s architectural style; one source calls it Italianate, in contrast to his more common Victorian Gothic structures like Augusta’s South Parish Congregational Church (to be described later in this series). The building was listed on the National Register of Historic Places in 1986.

Continuing south, the Libby-Hill Block at 227-233 Water Street is unusual in that it is built of granite. The Maine Historic Preservation Commission’s application for national recognition lists the architect as unknown. It says wealthy businessmen B. Libby and H. H. Hill had the block built in 1866, choosing granite to limit future fires.

The block is flat-roofed, with granite brackets supporting a granite cornice. This block also consists of three connected buildings, much modernized in exterior appearance.

According to the Maine Historic Preservation Commission, the first businesses on the street floor, from north to south, were A. D. Millett’s “dry and fancy goods store”; George Dewell’s barbershop; and James Patterson’s “book and music store.” George Cony used the upper stories for a dancing school and an “assembly hall.”

The block was owned by Maine Savings Bank when it was added to the National Register of Historic Places in 1986.

Dr. Hiram Hovey Hill was a widely respected physician and surgeon. On Tuesday, June 15, 1886, his fellow physicians honored him at a banquet at the Augusta House in recognition of his 50 years in practice. The brochure describing the occasion includes Hill’s speech of thanks, in which he summarized his early life.

Hill said he was born in Turner, and when he was 15 and 16 he lived with Mount Vernon’s village doctor and decided medicine would be his career. Beginning at 21, he studied under three Augusta and Hallowell doctors and took courses at the Medical School of Maine at Bowdoin for two years. After a year at the University of Pennsylvania, in Philadelphia, he returned to Bowdoin to graduate, because he, said, he couldn’t afford to finish at Pennsylvania.

Hill started his practice in Augusta on June 15, 1836. He told his 1886 guests that he immediately “found as I began to have patients that I didn’t know much,” so he kept learning, developing a system of thorough examinations to ensure no symptoms were overlooked.

Soon after opening his office, Hill married Sarah Ann Carpenter, of Augusta, who died in 1864. In 1870 he married Clara Lothrop Dalton, of Norridgewock. He had no children.

Hill was among the founders of the Maine Medical Association and an early president, according to one of the association’s publications. He was active in promoting medical progress, working to improve the state medical school and helping found Maine General Hospital, in Portland, where he served as a consulting surgeon. (Francis Fassett was the architect for the original hospital building.)

Hill practiced almost until he died. The medical association publication says he was on a call on Oct. 5, 1889, when he fell in a dark stairway and seriously damaged his right hip. He never recovered, and was bed-ridden until he died at 2:30 p.m. Dec. 2. A multitude of fellow practitioners, patients and friends attended his funeral.

According to the 1886 brochure, 50 guests, mostly doctors, attended Hill’s testimonial dinner, and others sent regrets full of praise for the honoree. One non-medico was former Maine Governor Selden Connor. Another was Judge W. P. Whitehouse (see The Town Line, Dec. 10, 2020), who praised Hill’s testimony in Superior Court cases.

Francis H. Fassett was born in Bath (Maine; the reference to Bath, United Kingdom, in Wikipedia is almost certainly an error). He left school at 14 to work in a store and at 18 was apprenticed to a local builder. He began designing almost immediately and in 1864 moved to Portland, seeking more opportunities. Portland suffered a major fire in 1866, and Fassett built many of the replacement buildings.

Fassett was Maine’s most prominent architect in the 1870s. He is credited with designing up to 400 public and private buildings. His style is described as High Gothic; many of his designs feature towers, turrets, and elaborately decorated door and window openings.

Surviving Portland buildings include the Francis Hotel and the former Baxter Library, on Congress Street; the Sacred Heart Church, on Mellen Street; and the three-story duplex Francis Fassett house, on Pine Street.

Fassett’s apprentices included his son Edward, who collaborated on Sacred Heart Church, and John Calvin Stevens (Oct. 8, 1855 – Jan. 25, 1940), a more famous architect than his preceptor. Among many libraries, churches and private houses (including Winslow Homer’s Prout’s neck studio), Stevens designed the 1901-1902 Governor Hill Mansion, in Augusta (to be described later in this series). In 1918 he remodeled the 1833 Blaine House (see more about the Blaine House in The Town Line, Jan. 21).

Next: more historic buildings, continuing south on the east side of Augusta’s Water Street.