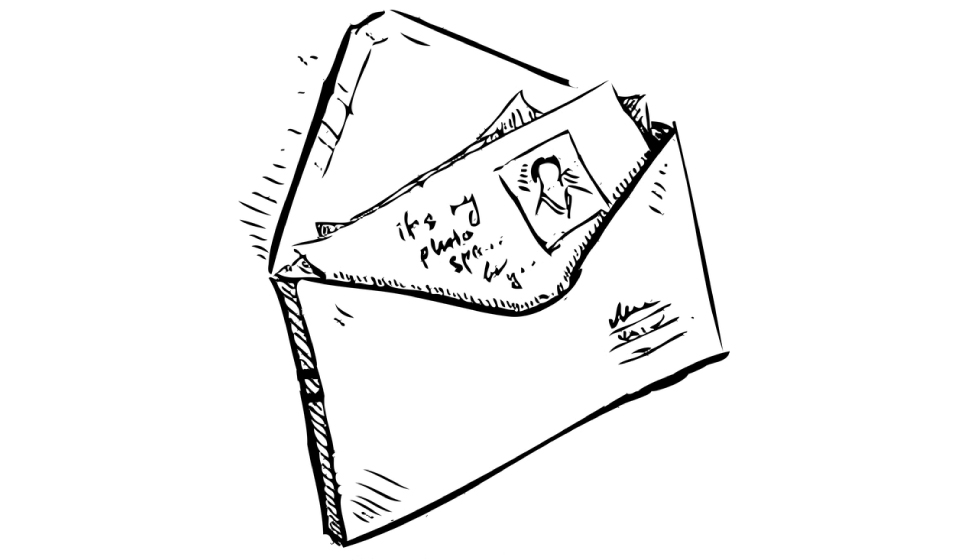 Because of the lock down, I have been watching an old late night show with a guy by the name of Dick Cabot. It’s on at 9 p.m. on the Decades channel, 5.3 Portland.

I am writing this as so much has been written and said about all the injustice that has been done to so many people of different colors. With that in mind, one show highlighted the actor Anthony Quinn. As they conversed about all kinds of theatrical stuff, Quinn was asked what was his favorite role.

He told Cabot that it was his portrayal of an Indian chief by the name of Red Coat. It seems Chief Red Coat was allowed to address Congress circa 1840. Quinn was given a dias to speak from to say what Chief Red Coat said, and it was tearful to see Quinn, without a script, orate what the chief said to Congress. It began like this: “Members of Congress. You invaded our shores over two centuries ago and my people welcomed you with open arms. Since that time, you have taken over our nation. Ours, not yours. And now you imprison my people on reservations located in a country we once owned.”

That is just a short clip but we all know what the fate of the Native Americans is.

It is my hope and prayer that as America’s conscience opens up to help others, please consider the real Native American, without whose help the original colonies would have never survived. Just think back of clean skies, clean water, unpolluted lands and people living in peace and happiness.

With my wife stuck in a lockdown Alzheimer’s facility, and all the negative news on TV and radio, with the editor’s permission, I would like, as I write this on Father’s Day, about a story my father told us young kids that we have always remembered.

Shortly after World War II, my father started a flying school which in those days was regulated by the Civil Aeronautics Administration (CAA). He started alone but later hired two other Certified Flight Instructors (CFI).

This new young man showed up to take flying instructions, and my father gave him to one of his new CFIs. Bear in mind many of these new CFIs were trained by the military, but regulated by the CAA. My dad mentioned this as some times a military-trained pilot goes by the book and needs to be reminded there is no rank involved here, and each student is treated with respect and understanding.

Well, it seems this new student was having a very difficult time learning how to fly and his ex-military instructor wasn’t very patient with him. Of course, yelling at the poor kid didn’t help during instructions. The instructor told my father, “This kid will never learn how to fly and I am through trying to teach him.”

So, being the gentleman my dad was, he decided to take the student on and see if he could teach him how to fly. Well, according to Dad, this kid’s skills for flying were nil. His eye, hand and feet coordination were very bad. In fact, after many hours of almost being killed teaching this young man, my dad told him he was sorry but, “you are just not equipped and skilled to be a pilot.”

My dad told the other instructor and others the sad news, but was surprised when the young man came into the pilot’s lounge and stated, “So, I gave it a try but now I’m off to Hollywood to become a movie star.”

Well, of course, everybody wished him well, but later laughed at his statement, saying he will probably be as good at acting as he was flying, and all had a good laugh.

Fast forward 20 years, and lo and behold, that young man that tried to learn how to fly did indeed make his mark in Hollywood. After a few small bit parts, he made his fame starring as Col. Hogan in the TV comedy series, Hogan’s Heroes. That young man was Bob Crane.

Happy belated Father’s Day to all out there. 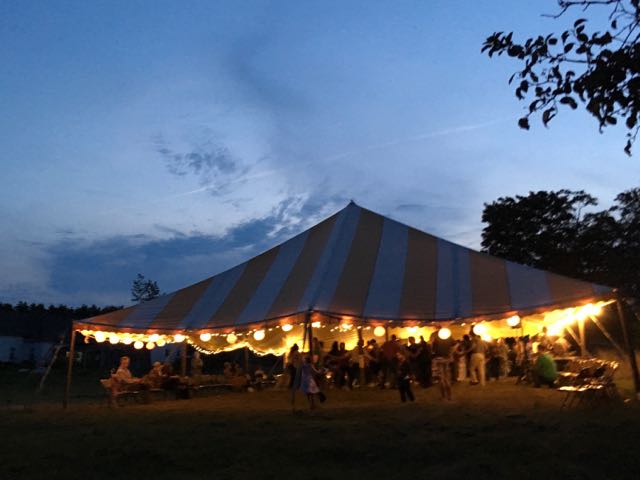 What better place to celebrate Halloween than on a farm? Join us at the Halloween Farm Fete at Pumpkin Vine Family Farm, in Somerville, on Sunday, October 27, from 11 a.m. – 3 p.m. Come in costume or slip into a straw hat and overalls at our funny farmer photo booth. The first 20 children get to decorate a free mini pumpkin; every child gets a free dancing gourd. Play our pumpkin games, including relay races, ring toss, and tic tac toe. Make an acorn pumpkin and a mini witches broom. Have a masterpiece at home? Enter it in our contest! meat, dairy, baked goods – and Yes! we still have carving pumpkins!

The farm is located at 217 Hewett Rd., in Somerville; please email info@pumpkinvinefamilyfarm.com or call Kelly at (207) 549-3096 for more information. This is a weather dependent event – in case of rain, please call 549-5089 to find out if it’s been canceled. 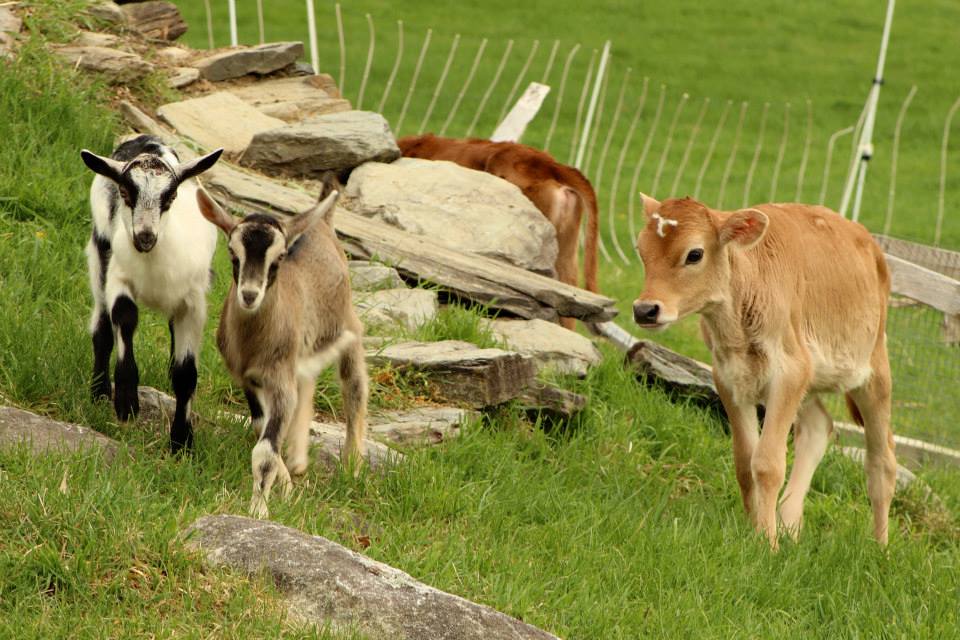 Head to Pumpkin Vine Family Farm, in Somerville, on Saturday, August 10, for an unforgettable evening of art and community under the open sky. The hillside fields are beautiful in the golden glow of twilight; filled with the music of Toki Oshima & John Pranio on fiddle and guitar. They are magical. Find a partner, meet your neighbor – soon you’ll be part of a swirling, laughing community in a contra dance guided by Chrissy Fowler, the amazing caller who makes the dances easy and fun, no matter your experience.

Prefer a slower pace? You can browse the craft tents from our amazing local artisans, enjoy a picnic dinner prepared by the talented folks at Washington General, stroll the farm fields, or just sit and watch the setting sun; our lights twinkle on at dusk. Children are welcome to play in the farm fields and explore the barn under parental supervision. Come alone or with friends – you’ll be sure to leave with more than you started!

Donations are greatly appreciated, as they go directly to the musicians and caller – you can help support the arts and and ensure that they can keep this annual event open to all! Call Kelly at (207) 549-3096 or email info@pumpkinvinefamilyfarm.com with questions. To learn more about the farm visit www.pumpkinvinefamilyfarm.com. This is a weather dependent event; please check our website or call the morning of the event if it’s looking questionable. 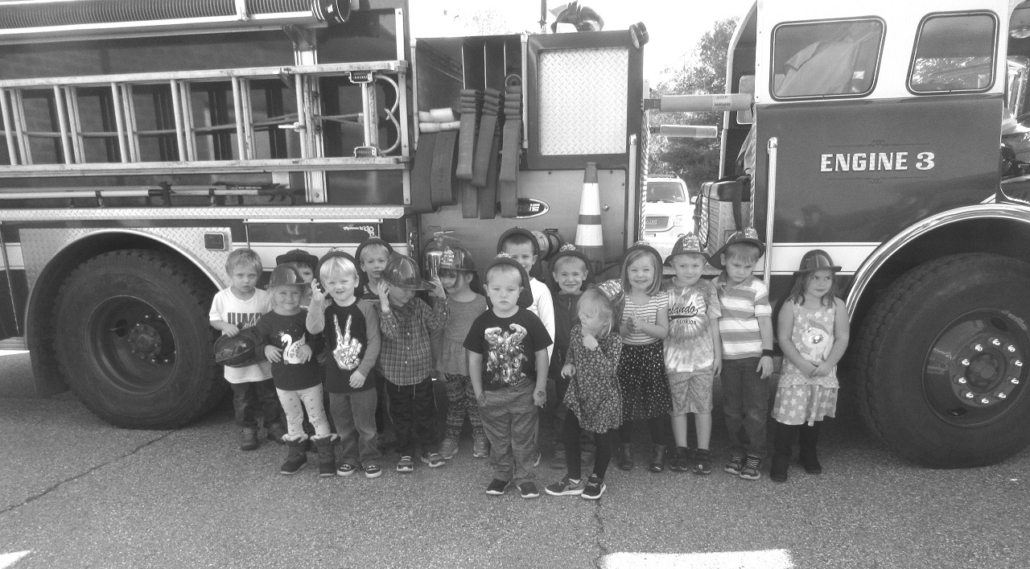 The Somerville Volunteer Fire Department visited the Somerville Pre-K classroom at Somerville Elementary School to teach them about fire safety. They showed them what a firefighter would look like if they had a fire at their house, and they demonstrated how they use their equipment. They talked about 911 and knowing what their address was. The children explored the firetruck, learning about the equipment and for what it is used. 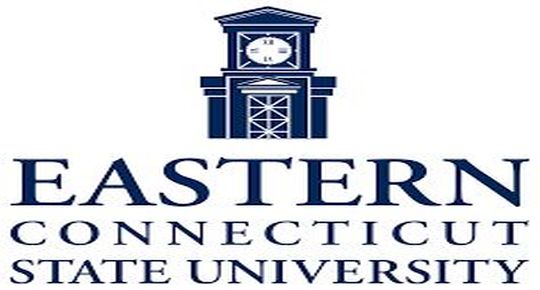 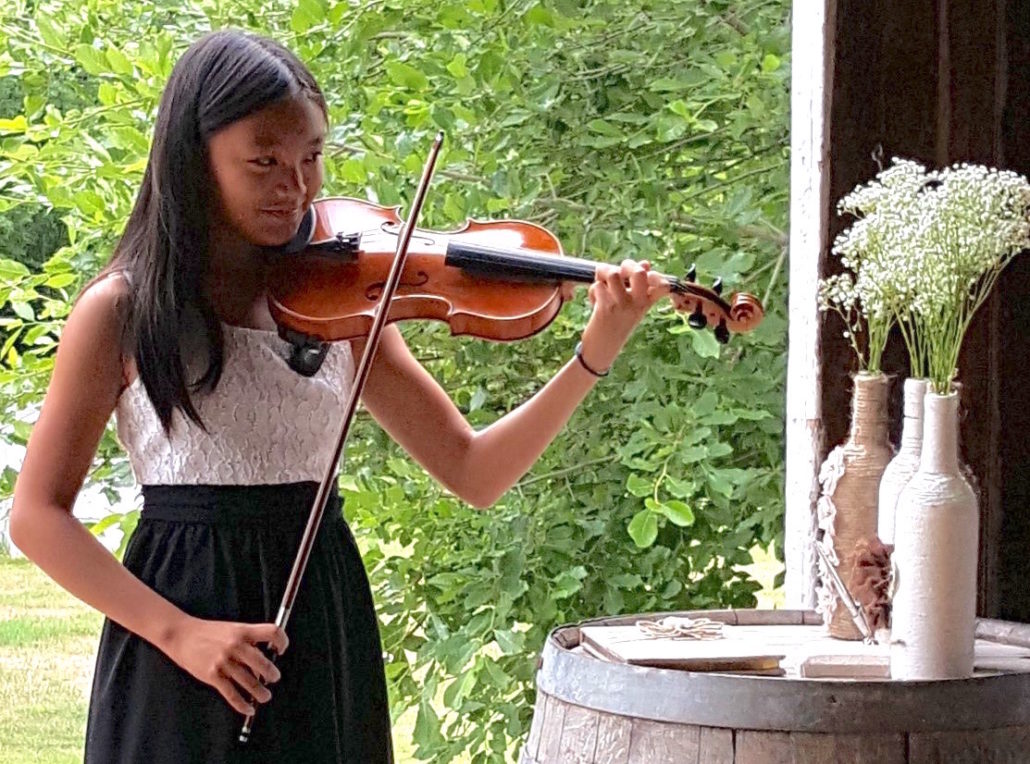 Maine Connections Academy (MCA), the state’s first virtual public charter school, has selected Lily Thompson, an eighth grader from Somerville, as its January STAR Student. Lily was chosen due to her engagement in her lessons and her consistently excellent performance in and outside of school.

Lily enrolled in Maine Connections Academy in 2016, seeking more flexibility to devote additional time to her talents in music and horseback riding. Outside of MCA, Lily plays piano and violin and participates in multiple orchestral groups. Her favorite activity at MCA is the school’s Academic Summits, events where students from across the state come together with teachers and special guests for days of learning and fun.

Lily’s favorite subject is Gifted and Talented Literature Study. Lily enjoys literature study because of the opportunities it gives her to analyze short stories and engage in discussion with her peers. Algebra is her second favorite subject. Says Lily, “[Algebra] is like another language. Instead of words there are numbers. Numbers always have an exact definition, and words sometimes don’t.” 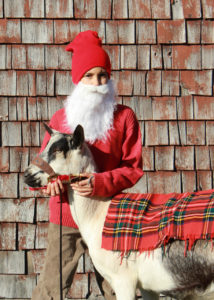 The magic of Christmas is furry and four-footed at Pumpkin Vine Farm’s Holiday Craft Markets on December 3 and 17. In Scandinavian tradition, the Yule Goat brings presents to children at Christmas, accompanied by the Tomten, a farm gnome who looks after the well-being of the animals. The farm’s Yule Goat and Tomten will be visiting with children between 11 a.m. – 2 p.m., with a special story time beginning at noon and 1 p.m. Children will have the opportunity to make a special treat for the animals in their neighborhood.

Following a visit to the barn, browse the local crafts and farm-fresh treats at the farm’s holiday market. All our products are made by local artisans and reflect the beauty and bounty of nature, from wreaths to wooden bowls, hand-knits, skin-care products, and jewelry. Our edible treats include cajeta (goat’s milk caramel sauce) and truffles, local honey, and squash, pumpkins and other veggies for your Christmas feast.

Bring your walking boots (and a sled if it’s snowy) to enjoy the beauty of the farm’s hills and fields in winter; we’ll have a fire and free hot chocolate to warm you inside and out! The farm is located at 217 Hewett Rd., in Somerville; for more information, visit www.pumpkinvinefamilyfarm.com, email info@pumpkinvinefamilyfarm.com or call (207) 549-3096.

There’s folk music in the air and it’s coming from the fields of Pumpkin Vine Family Farm in Somerville! Come find out why the pigs are shaking their tails and the goats are stomping their feet…

Sassafrass Stomp is performing their sweet, high-energy folk music on Saturday, August 12, from 6 – 9 p.m., in a tent overlooking the back fields. No experience is needed to enjoy the fun as Chrissy Fowler, the dance caller, specializes in teaching contra dance to beginners and children, at 217 Hewett Rd., in Somerville!

Sassafrass Stomp, the husband and wife duo of Adam Nordell and Johanna Davis, perform traditional fiddle tunes and old ballads from the various branches of Celtic and old-time family trees as well as their own original material. They back their sweet harmony vocals with fiddle, banjo, guitar, shruti box and foot percussion. When they are not performing, they are also the farmers of Songbird Farm, in Unity, where they grow heirloom grains. Learn more and hear samples of their music at www.sassafrassstomp.com.

Pumpkin Vine Family Farm became incorporated as a Farm Education Center in 2017, with a mission of connecting the community to small family farms. In that spirit, we are hosting this concert and dance as a non-profit event; all proceeds go to the musicians and equipment rental companies.

The Somerville Volunteer Fire Department recently visited the Somerville Pre-K program. Chief Dostie and other members of the Somerville Volunteer Fire Department demonstrated what a firefighter looks like when dressed in full gear. Young children are often scared the first time they see a firefighter. Children practiced crawling under smoke. They also had a chance to see what equipment is on a fire truck. Chief Dostie talked about smoke detectors and the importance of them. 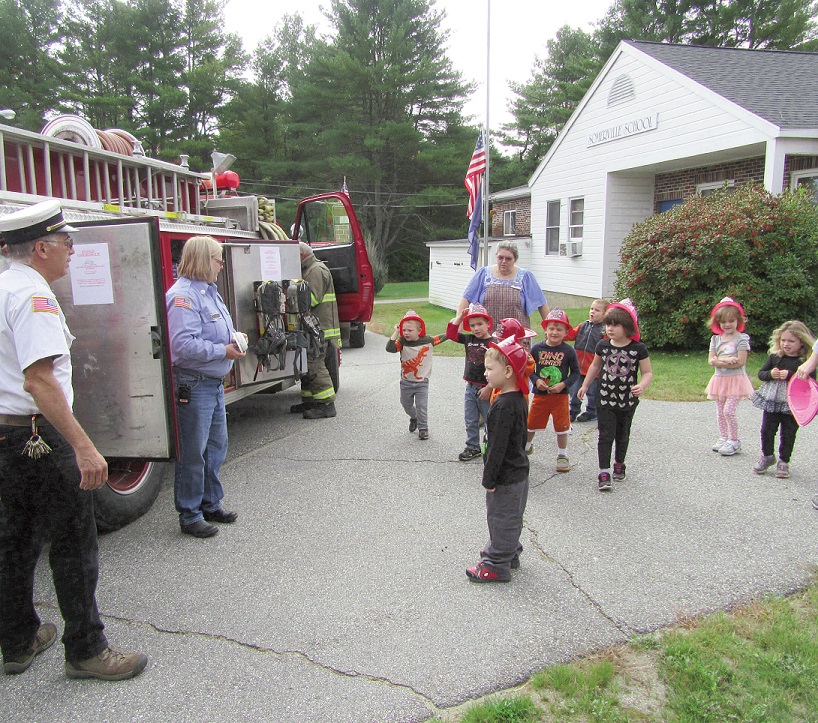