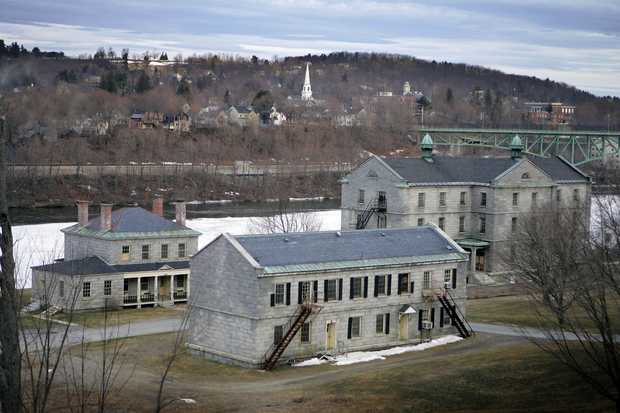 The Kennebec Arsenal compound in the early years, above, and the arsenal today. (mainepreservation photos)

The previous articles in this series on historic places talked about some early Augusta sites and buildings. Two more, besides the Cushnoc Archaeological site and Fort Western discussed last week, are on both the National Register of Historic Places and the list of National Historic Landmarks. They are the Kennebec Arsenal on the east bank of the Kennebec and the Blaine House on the west bank, beside the state capitol building.

During the War of 1812, British warships repeatedly attacked Maine. The British seized Fort Sullivan, in Eastport, (built in 1808-1809) in July 1814, capturing 65 soldiers. (This writer has found no suggestions why the fort was named Sullivan. Perhaps after New Hampshire’s Revolutionary War General and later state Governor John Sullivan [Dec. 17, 1740 – Jan. 23, 1795]?)

In September 1814, British General John Coape Sherbrooke led the Penobscot Expedition. With 3,000 troops from Halifax, he defeated American forces as far up the Penobscot River as Hampden and Bangor, and seized Machias.

Following this success, the British renamed the Machias fort Fort Sherbrooke and held Castine and the territory east until the war ended. They called the area New Ireland. The February 1815 Treaty of Ghent returned the area to the United States, although disputes over islands near the border continued and, Wikipedia says, Eastport was not returned to the United States until June 30, 1818.

The Wikipedia article adds that the departing British took back to Halifax 10,750 pounds that Castine had accumulated from tariffs and used the money to found Dalhousie University.

The end of the war did not settle the border between the United States and the Canadian province of New Brunswick. There were arguments over what is now northern Aroostook County and southern Madawaska County, as settlers from both sides moved into the area.

Consequently, in 1827 the federal government developed plans for a major arsenal in Augusta, on a site south of Fort Western accessible by ocean-going ships. The arsenal was built between 1828 and 1838.

Wikipedia says the original, mostly granite buildings, built between 1828 and 1831, were “commandant’s and officer quarters, barracks, stables, a carriage shop, and the main armory.” By 1838, the commandant’s building was enlarged and redesigned in Greek Revival style, and two magazines, a munitions laboratory, an office, a wooden stable and a granite and iron perimeter fence were completed. Other sources list buildings differently, but it is clear there were at least eight early granite buildings.

In 1838, Maine and New Brunswick sent soldiers to their common border. United States General Winfield Scott came to the Kennebec Arsenal to negotiate with his friend John Harvey, then Lieutenant-Governor of New Brunswick. The two agreed to recall the respective militias and the dispute cooled.

In August 1842 the Webster-Ashburton Treaty established the boundary between the United States and Canada that exists today, including the Maine-New Brunswick line that runs along the Saint John and Saint Francis rivers. (Webster was Daniel Webster from New Hampshire, at that time United States Secretary of State; he is also known for his role in negotiating the Compromise of 1850. Ashburton was Alexander Baring, First Baron Ashburton, a British financier and diplomat.)

After Maine became less significant in international affairs, the arsenal became less vital. Wikipedia says the government made weapons in it during the Mexican War (1846-1848) and the Civil War (1861-1865); but it was too remote to be practical for major production.

The federal government closed the Arsenal, issuing the order in 1901 and finishing the process in 1903, and transferred the property to the State of Maine, owner of the Maine Insane Hospital (later the Augusta Mental Health Institute [AMHI]). The mental hospital was established by legislation in 1834 and the first buildings were completed in 1840, adjoining the Arsenal grounds on the south.

By the early 20th century, the state needed more hospital beds. Beginning in 1905, the wooden buildings on the Arsenal grounds were demolished and the granite buildings were redone and integrated into the hospital.

An on-line site describes the building called the “Old Max,” designed by Lewiston architects Coombs and Gibbs and added at the eastern side of the grounds in 1907-1909. Four stories high, built of granite and brick and designed to harmonize with the earlier Arsenal buildings, it was for maximum security patients, those too dangerous for the hospital and too mentally ill for prison.

Beginning in the early 1970s, Maine and other states moved to a new model of mental health care that minimized confinement in institutions. State officials debated what to do with the formal Arsenal/hospital. The Old Max became a state office building.

The Kennebec Arsenal was listed on the National Register of Historic Places in August 1970 and as a National Historic Landmark in February 2000.

In 2004 Save America’s Treasures, a National Park Service grant program, provided funds that state officials used for work on the granite wall and iron and granite fence around part of the original Arsenal property.

Three years later, the state sold the Arsenal property to a private company. A contemporary description lists eight major buildings on the property, plus the fence and gate, retaining walls and a wharf. Wikipedia says there are six buildings.

Conditions of the 2007 sale included a requirement that the new owner preserve and maintain the property. However, the owner let the Arsenal deteriorate to the point where in 2013 Maine sued to force the company to return the property. The owner did some work and promised more, Wikipedia says; but by 2013, the Arsenal was listed as a critically endangered historic landmark.

Contemporary photos of the Arsenal show clearly the light-colored interlocking granite blocks. An on-line site describes it as “one of the best and earliest surviving examples” of a 19th-century federal munitions depot.

Judging from two recent letters to the editor in the Central Maine newspapers, there has been no improvement. In December 2020, a Manchester resident referred to proposals to renovate the Arsenal for commercial or residential space and mourned the failure of city, county and state governments to act.

A second writer echoed the concerns in January 2021and extended them to the entire AMHI site. He called it a “historic gem” that should be preserved as representative of an important part of social and medical history.

The Blaine House, also called the James G. Blaine House, is the fourth Augusta property that is designated both a Historic Place and a Historic Landmark. It is part of Augusta’s Capital Complex Historic District. The Capitol building and Capital Park are also part of the complex and additionally have individual Historic Places listings. 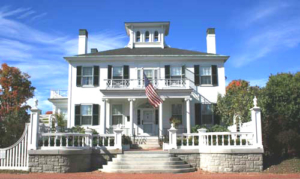 The Blaine House was originally a Federal style mansion, built in 1833 by a retired mariner, Captain James Hall. In 1862, Blaine bought it as a gift for his wife, the former Harriet Stanwood.

In the 1870s, Blaine had the original building remodeled and enlarged, making it Victorian and Italian in style and putting an addition on the west (back) side. The house remained in the family until 1919; Wikipedia says it housed the state Committee for Public Safety during World War I.

Walker Beale was killed in France in World War I, and his share of the house returned to his parents. Truxton Beale gave his share to Harriet, by then his ex-wife, making her sole owner.

In 1919, Harriet Blaine Beale donated the house to the State of Maine in memory of her son, specifying it was to be used as the Governor’s house. She became a writer, publishing children’s books and editing a collection of her mother’s letters. She died at her New York City home and is buried in Bar Harbor.

The legislature in 1919 accepted the gift and the condition. Maine architect John Calvin Stevens remodeled the building in neo-Colonial style, and in 1921 Carl Milliken became the first governor to live there. Most of his successors have also chosen to live in the historic house.

Governors have used the house to entertain famous guests, including President Ulysses Grant, advocate for the blind Helen Keller and aviator Amelia Earhart. An on-line source says some chief executives used it to promote Maine; for example, Governor Louis Brann, who served from January 1933 to January 1937, attracted large crowds to his celebrations of Maine Summer Visitors’ Day.

Wikipedia says in 2014 heat pumps were installed to reduce the horrendous heating bill.

When current Governor Janet Mills opened the annual Christmas light display on the building on Dec. 11, 2020, she called it “a Celebration of Resilience.”