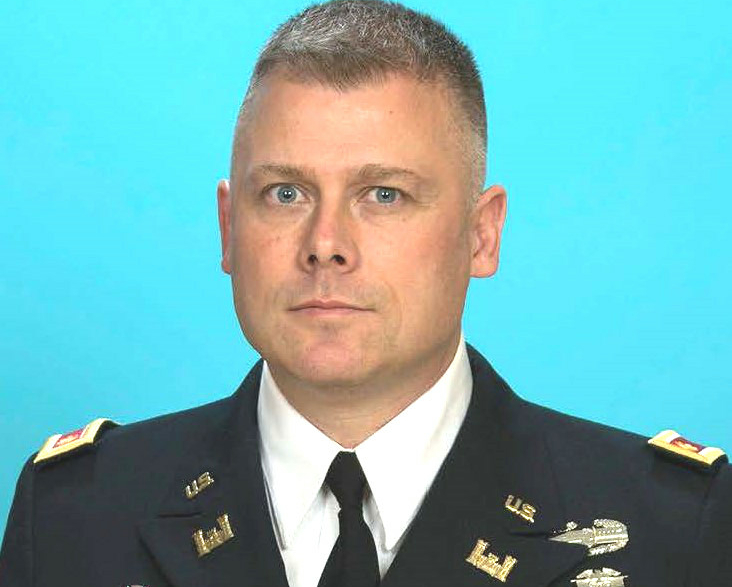 Shanon W. Cotta, of Alna, was recently promoted to the rank of lieutenant colonel at Joint Force Headquarters (JFHQ), Maine Army National Guard. Cotta is assigned as the garrison commander at Camp Keyes, in Augusta, overseeing base operations. He also administers the use and maintenance of various training sites across the state, as well as the development of new training sites.

Raised in South China, by David and Helga Cotta, he attended China Elementary School and Erskine Academy, in South China. He graduated from the University of Maine at Farmington with a bachelor of science (BS) and bachelor of arts, (BA), the University of Maine Graduate School with a Master of Arts in Teaching (MAT) and he also holds degrees from Nashotah House Theological Seminary.

Lieutenant Colonel Cotta is married to Jill Cotta, a teacher at the Center for Teaching & Learning (CTL), in Edgecomb, and they have three young children, Owen, Ellie and Keagan. They are avid local sports fans and love supporting Wiscasset and Boothbay youth sports.

I am writing as a longtime Alna resident to ask you, the people of the other towns in RSU #12, to approve the Alna Amendment when you vote on June 12. It will be on its own ballot.

After extensive analysis, the RSU board determined that this amendment will not affect any other RSU towns financially, or in any other way.

Alna will, however, continue to pay private K-8 tuition for all children living in Alna as of June 30, for as long as they live here. This change harms no current Alna resident.

In addition, all current and future Alna students will have taxpayer-funded K-8 public school choice and public or private high school choice.

The townspeople of Alna voted overwhelmingly in March to end subsidy of private schools with public, taxpayer money. This policy, which we never chose, has made us a magnet for families who move to Alna just to access private school subsidy, because we are one of only two towns in Maine that have this benefit. As a result, we have the highest taxes in the RSU and in Lincoln County, and more children per capita than any other RSU town. Between 2013 and 2017, 33 children moved to Alna. Thirty of those children (91 percent) enrolled in private schools. Most of the children of our long-term families attend public schools.

We are a small residential town with no commercial tax base. We cannot afford to continue this policy. In addition, about half-a-million Alna dollars are now diverted from public to private education every year.

Alna is one of only two towns in Maine where children can attend private elementary schools and the taxpayers will pay the tuition. Alna citizens never chose this policy; it is a historic fluke that predates school consolidation. In recent years, as word of our unique subsidy has spread, many families have moved to Alna for the sole purpose of sending their children to private schools at the expense of the rest of us. Some people even fraudulently give an Alna address when they actually live in other towns. Landlords market Alna’s subsidy, like this internet ad: “available for school year rental, September to June. Alna is a school choice town. Children can go wherever they choose and the town will pay the tuition.”

Of the children who have moved to Alna in the last five years 91 percent attend private K-8 schools; we now have more children in private schools than public ones, more children per capita than any other town in RSU #12, and the highest taxes in Lincoln County.

In March, Alna citizens finally said enough is enough. With a record turnout, we voted by an almost 2-to-1 margin to petition the RSU school board to allow us to be free from forced payments to private K-8 schools for children who arrive in Alna after June 30. Even though the private school families now living in Alna are “grandfathered” and will not be harmed, this losing faction lobbied the RSU board to ignore our vote and force us to continue these subsidies for future arrivals. Your board representatives rejected this appeal and honored Alna’s wishes by a vote of 13-2. Now this same losing group will try to convince you – the voters of RSU #12 – to overturn the vote of their own town and force us to keep our doors open to a continuing migration by families who, like them, see Alna not as a community, but as a private school checkbook.

Please honor the wishes of the overwhelming majority of the average folks of Alna, young and old, parents and seniors, new arrivals and long-term residents alike and help us put an end to this by voting “YES” on the Alna Question on the RSU ballot on June 12.