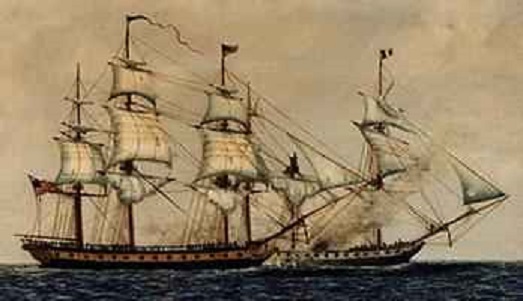 USS Adams, as a 28-gun frigate. Below, rebuilt as a sloop of war.

War of 1812
Hampden and Wiscasset

Two events in September 1814 involved central Kennebec Valley residents directly in the war against the British, fortunately without recorded casualties.

The first and less significant began in Hampden, where British forces sailed up the Penobscot River to capture the USS Adams. The Adams began life in June 1799 as a 28-gun frigate; after service against the French in the West Indies and the Barbary pirates in the Mediterranean, she was mostly inactive from 1803 to 1812, ending up in 1811 as a receiving ship (where new sailors live before they’re assigned to their ships) at the Washington, D.C., Navy yard.

In June 1812, Wikipedia says, the Adams was “cut in half amidships and lengthened 15 feet in the course of being completely rebuilt as a sloop of war.” After adventures on both sides of the Atlantic, on Aug. 17, 1814, she ran aground at Isle au Haut, off Stonington.

“Skillful seamanship aided by a rising tide managed to refloat the ship,” Wikipedia says. Leaking badly, she got up the Penobscot to Hampden and was being repaired when a British expedition followed upriver to seize her. 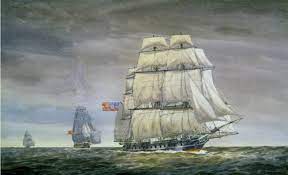 USS Adams rebuilt as a sloop of war.

On Sept. 3, her commander, Captain Charles Morris, chose to sink and burn her to keep her from the British. Morris and his crew headed through the wilderness from the Penobscot toward the Kennebec. Henry Kingsbury, in his Kennebec County history, gave a lively account of their adventures in his section on the Town of Clinton, though he misdated the episode as 1812.

The sailors got to the Sebasticook, found some bateaux and started downriver toward civilization, he wrote. The Clinton area was already buzzing with rumors of Indian attacks, so when one early afternoon Jerusha Doe and Polly Richardson saw boats with unknown armed men, they ran to the nearest house screaming, “The Indians are coming!”

Word spread, and residents headed for Winslow, seeking protection in what was left of Fort Halifax. It took until evening to identify the intruders as friends and welcome them, Kingsbury wrote, and a lame man who couldn’t escape fast enough “lay hidden all night in a potato trench on his father’s farm.”

The Adams crewmen left their boats at Clinton Village, walked to Noble’s Ferry opposite Nye’s Corner, in Fairfield, crossed the Kennebec and got a ride to Waterville from a man named Isaac Chase, whose son still talked about the event in the 1890s, Kingsbury said. (Other sources give other accounts of their cross-country hike.)

Wikipedia says Morris and most of the crew got back to their Portsmouth, New Hampshire, base by Sept. 9. Within another week the entire crew was present, “a source of great satisfaction for Morris.”

The British forces, meanwhile, killed a few local people and did a great deal of damage in Hampden, Bangor and other Penobscot River towns. An on-line source says the memory of Hampden led local residents to support Maine’s separation from Massachusetts, which had not protected them, and to continue opposition to the British, evidenced in the Aroostook War.

According to another on-line source, the Adams sat at the bottom of the Penobscot until 1870, when she was raised, repaired in Boston and began a new career “as a Navy sailing trainer ship, sailing all over the world before being retired in 1920.”

Other British ships hovered threateningly off the coast around Wiscasset. In the history of Fairfield, the writers named five residents who, “realizing the hazard to the Town if the British had control of the Kennebec,” joined the defense at Wiscasset: Samuel Bates, James Lander, Henry Lawrence, James Lawrence and William Lawrence.

The implication is that they went as individuals. If they did, they soon enlisted. Military records in the Maine genealogy archives show Samuel Bates at Wiscasset in Captain James Child’s Winslow militia company (part of Colonel Herbert Moore’s regiment) from Sept. 12 to Sept. 27, and in Joel Wellington’s Albion company, Colonel Elnathan Sherwin’s regiment, from Sept. 24 to Nov. 10.

James Lander and Henry Lawrence served in Sergeant Ansel Tobey’s detached company from Sidney, also under Sherwin’s command, at Augusta from Sept. 13 to Sept. 24. Lander and all three Lawrences are listed in another of Sherwin’s units, Captain Stephen Lovejoy’s Sidney-based company that served at Wiscasset from Sept. 24 to Nov. 10.

It could well have been the presence of the British navy that led to the Sunday, Sept. 10, special town meeting in Augusta. Historian James North wrote that voters unanimously authorized selectmen to buy powder, tent material, “camp kettles and small arms”; they approved a “special tax” to raise $500 for the supplies.

Their apprehension was justified the next day. On Sunday, Sept 11, North wrote, the Wiscasset Committee of Safety sent an urgent message upriver asking for troops to repel an expected British landing.

Colonel Stone was from Gardiner, and nine of the 13 large companies he led came from Augusta, Hallowell or Gardiner, with inland companies from Winthrop and Litchfield and two down-river ones from Pittstown. This regiment was sent home Sept. 25, after two weeks’ service.

Colonel Sweet was in charge of two regiments. One, of seven companies, came from Readfield, Farmington and Wilton and served at Bath through the second week in November. The other consisted of 11 companies with soldiers from Fayette, Lewiston, Mount Vernon, New Vineyard, Readfield, Wayne and Winthrop. These men were released in late September; most companies were sent to Wiscasset, but one stayed in Monmouth.

The Augusta-area regiments were joined by other militiamen from the Kennebec Valley. Many local histories, on line and in book form, list regiments, companies and often privates in each company by name.

Most regiments had two or three officers, four corporals, four sergeants, one or two musicians and between 30 and 50 privates (one had only five; others had 60 or more). Some had waiters.

(An on-line article from the Journal of the American Revolution explains that waiters, also called “servants, batmen or ‘bowman,'” were officers’ personal servants. At least in the Revolutionary army, they could not be boys or old men, and they were expected to accompany their officer wherever he went. In May 1779, General George Washington ordered that the waiters drill with the fighting men; but by the end of May, the article says, he changed his mind and said they should not be armed.)

Colonel Moore, from Winslow, led 11 companies raised in Fairfax (Albion), Harlem (China), Clinton, Vassalboro and Winslow. The majority of these companies served at Wiscasset from Sept. 12 to Sept. 27.

Lieutenant Benjamin J. Radcliffe’s company, no home town given, was one of the largest: ranks included an ensign, four corporals, four sergeants, two musicians and 57 privates.

Captain Daniel Wyman, no home town (another on-line source says he commanded one of Vassalborough’s four companies), had a lieutenant and an ensign under him, four corporals and four sergeants but only one musician for his smaller company.

Captain Benjamin Robinson’s company was also from Fairfax. One of the smallest companies, with about two dozen privates, it had a full complement of officers and NCOs and two musicians.

Captain John Moore’s company came from Clinton, as did Captain Irial Hall’s company. This writer has not been able to find out whether Captain Moore was related to Colonel Moore.

Captain Robert Fletcher’s company, another large one, was raised in Harlem (later China). These men stayed at Wiscasset until Oct. 1, 1814. The company included Jacob, Joseph, Thomas and Zachariah Norton and Daniel, Jonathan, Nathaniel and Samuel Gray.

Captain Daniel Crowell’s company was also from Harlem. Jabish Crowell was a sergeant; David and John, Jr., were privates.

The town of Palermo sent two militia companies to Belfast from Sept. 13 to Sept. 24. Millard Howard listed the men involved — some apparently from nearby towns — in his Palermo history: Colonel John Commings’ regiment included companies headed by Captain Moses Burley (or Burleigh), whose men were mostly from North Palermo, and Captain Job Lord.

The Palermo militiaman had been on standby since June. When finally called to action, they considered the government pay – about $10.50 a month, Howard said – not enough to risk their lives for and asked town officials to raise more. Town officials refused.

Colonel Sherwin was in charge of eight large companies of “drafted militia” (the term is not explained) from a wider geographic range – Starks, Bingham and Canaan, as well as Wellington’s Albion company; Lovejoy’s and Amasa Lesley’s Sidney companies; and Jeremiah Farwell’s Vassalboro company. Most of these companies had 60 or more privates plus the usual complement of officers.

Wellington’s was the largest, with 75 privates. There were five Hawes, David, Ebenezer, Isaiah, James and Seth, all privates; and six Richardsons, ensign Israel, sergeant Robert and privates Andrew, Ebenezer, Seth and Seth, 2nd.

Captain Tobey from Sidney was assisted only by Sergeant Elias Burgess and Corporal Joseph Nye, and had 13 privates. Notes after six of the names, including Burgess and Nye, say the men were credited with either eight or 11 days of service.

These companies went to Wiscasset and Edgecomb Sept. 24 and stayed until Nov. 10.

Another regiment under Colonel Sherwin was moved to Augusta to replace the local troops sent to the coast. The colonel and six of his nine officers were from Waterville (the other three are listed as residents of Fairfield, Sidney and Winslow); the 10 companies of enlisted men came from Belgrade, Dearborn, Fairfield, Sidney and Waterville. (Dearborn was a town from 1812 until 1843, gradually being divided among Waterville, Belgrade and Smithfield.)

In their coastal positions, North wrote, the Augusta-area regiments made camp at Edgecomb, across the Sheepscot River from Wiscasset. On Sept. 23, a sentry rode into camp with the news that “an English man-of-war was in the river evidently preparing to land troops.”

Units from Gardiner, Hallowell, Augusta and Winslow, commanded by Major Samuel Howard, hurried the six or eight miles to the expected landing point, “slept on their arms at night” and when no enemy appeared the next morning, went back to Edgecomb.

The whole affair turned out to be a false alarm. Most of the militia units returned to their home towns before the end of September; Sewall’s and one other division spent 40 days on the coast.

Counting the companies and averaging the number of officers and men per company leads to the conclusion that about 3,000 armed men should have converged on the area around Wiscasset and Edgecomb. The 1810 census listed Wiscasset’s year-round population as 2,083 and Edgecomb’s as 205.

How many men actually went, and how many decided they could not leave their farms in mid-September for an indefinite period? How many teen-aged boys joined them, and how many stayed with the women and younger children? How many wives encouraged, or perhaps joined, their husbands, and how many begged them not to go? These are the sorts of questions only the most diligent – or luckiest — historian can sometimes answer.