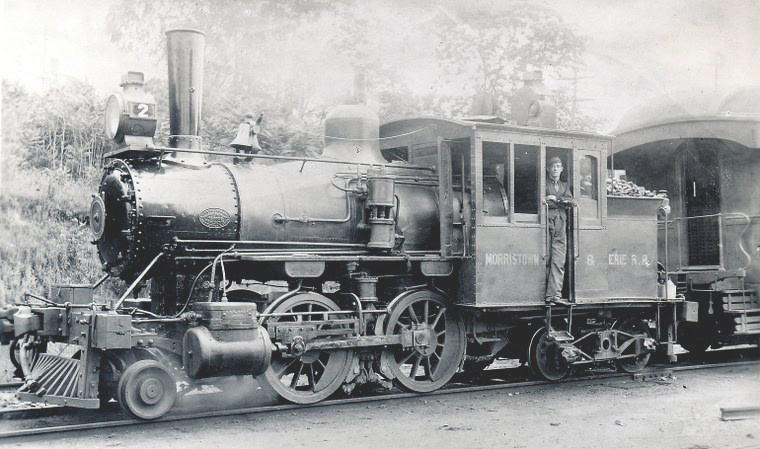 When railroads first began operating in the United States, different companies used different gauges (width between the tracks). “Standard gauge” ranged from four feet eight-and-a-half inches (imported from Britain, used by the Baltimore & Ohio and Boston & Albany lines, among others) to six feet (used by the Erie and the Lackawanna, among others), and was not definitely established at four feet eight-and-a-half inches until after the Civil War. The war emphasized the need for interconnected rail transportation; the transcontinental railroad was completed on May 10, 1869.

In addition to the standard gauge, there were “narrow-gauge” railroads. According to Ernest Marriner’s Kennebec Yesterdays, a narrow-gauge line could have tracks anywhere from two feet to three-and-a-half feet apart.

Maine, Marriner wrote, was the state with the most narrow-gauge railroads. Linwood Moody wrote a generously illustrated book about them, published in 1959 and entitled The Maine Two-Footers. How many there were depends on when they were counted, because, as with the standard-gauge lines, companies consolidated. Moody is certain, however, that the central Kennebec Valley hosted two: the Kennebec Central, with which he fell in love as a child of 10 or 11, and the one remembered locally as the Wiscasset, Waterville & Farmington.

The Kennebec Central was the shortest narrow-gauge in Maine. It had five miles of track, from Randolph to the Togus veterans’ home in Chelsea, and ran from July 23, 1890, to June 29, 1929. Wikipedia says Randolph had a small station from which stairs led to the covered bridge crossing the Kennebec River to Gardiner. 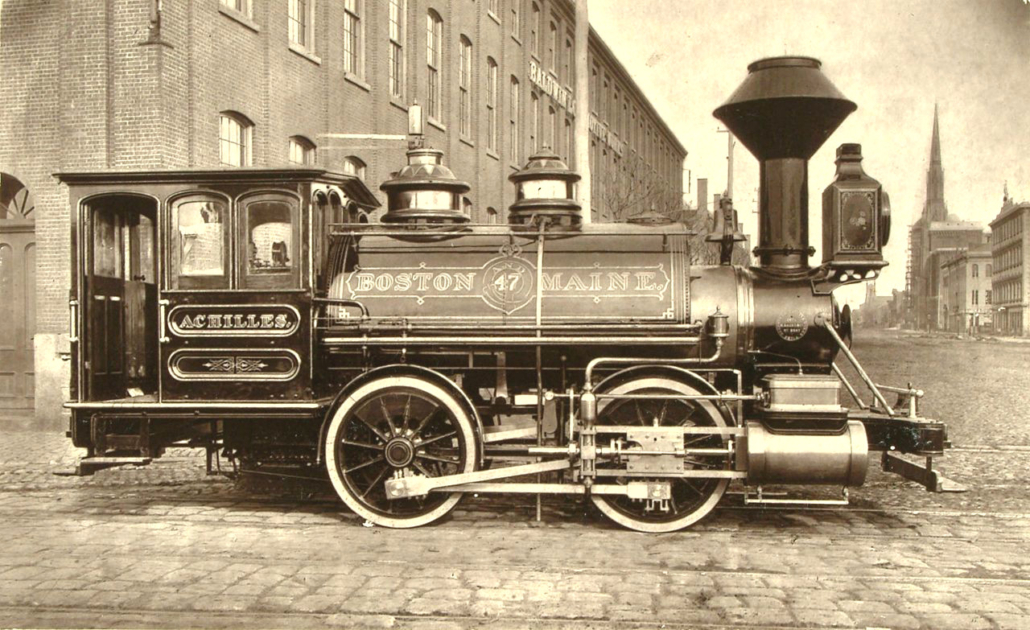 During those 39 years, the railroad used four engines, an 1890 Baldwin and three Portlands built between December 1890 and April 1892. The first two were apparently bought new; the Baldwin was scrapped about 1922 and the first Portland about four years later.

The two later Portlands were second-hand, one acquired about 1922 (to replace the Baldwin) from the Bridgton & Saco River line and the other (no date given; probably 1925 or 1926, as it replaced the first Portland) from the Sandy River line. Moody wrote they both went to the Waterville, Wiscasset & Farmington in the early 1930s, after the Kennebec Central closed and as the WW&F in turn was about to go under.

The Kennebec Central engines hauled passenger coaches, open-sided excursion cars, combination passenger and baggage cars, freight cars and coal gondolas. A main purpose of the railroad was to let Civil War veterans get from Togus to Gardiner and their relatives and other visitors from Gardiner to Togus. Both Moody and Wikipedia describe the Sunday afternoon baseball games and concerts that brought crowds of visitors to the veterans’ home grounds.

The railroad’s other use, and probably more dependable income source, was to deliver supplies to Togus, especially the coal that was shipped up the Kennebec to a government-owned facility in Randolph and was used as heating fuel. Therefore, when the government switched the coal-hauling contract to a trucking company, the railroad closed.

Its rolling stock was stored until 1931, when a fire damaged the WW&F engines housed in Wiscasset. Wikipedia says Frank Winter, then the WW&F owner, bought the entire Kennebec Central, brought the engines back into use and sold what trackage and cars he could; the left-overs were carried down the river in the 1936 flood.

The WW&F, also known as the Weak, Weary and Feeble and the Little Wiggler, went through multiple corporate incarnations, according to Moody. It started in Wiscasset because Wiscasset was a major port, and was first chartered in 1854 as the Wiscasset & Québec.

For 40 years, Moody wrote, nobody developed the railroad. In 1894, a group of local entrepreneurs raised funds to start laying track, improving Wiscasset’s docks and connecting the new railroad via a very long trestle across the Sheepscot to the docks and adjoining Maine Central yard.

The railroad’s first engine was an 11-year-old Forney bought from the Sandy River and used to haul work trains with supplies and crews as the line was built. Two Portlands built in November 1894 were the next engines added.

The W&Q tracks went along the Sheepscot River through Sheepscot station, which served Alna, where there was a flag stop, and Sheepscot Village; through Head Tide; past a railroad-owned water tank and gravel pit and across the Sheepscot to Whitefield; thence to North Whitefield and Coopers Mills. Leaving the river, the line continued through Windsor, Weeks Mills, Palermo and China to Albion, which it reached in November 1895.

Moody commented that the typical station was in the countryside a mile or more from the nearest village.

The promoters still had Québec in their vision statements. Moody wrote that tracks were laid from Albion to the point between Burnham and Pittsfield where the W&Q would cross the Maine Central tracks and continue north. In 1897, the Maine Central vetoed the crossing.

Representatives of both lines went to the three-man Maine Railroad Commission. The commissioners ruled that the W&Q could build an overpass; and that while the overpass was being built, the W&Q could install a temporary crossing, called a diamond, if the company could do the job without interfering with Maine Central traffic.

The overpass idea was a non-starter; the ground was too flat.

As Moody told the story, the Maine Central trains, passenger or freight, normally ran about every two hours. W&Q officials hauled in a pre-made diamond and assembled an Italian crew to install it. The foreman waited for the morning Maine Central to go through and signaled the crew to get started. But whoops! here came another Maine Central train. It passed, the crew moved in – and another engine was bearing down on them.

(Moody thought the whole deal, including the commissioners’ role, smelled of fish. He doubted the railroad promoters seriously planned to continue the line to Québec, or would have prospered if they had; wondered why, if they were serious, they didn’t fight harder against the Maine Central; and believed their stockholders were gypped.)

The result was that as of 1897, the main line of the W&Q ran 43-1/2 miles from Wiscasset to Albion, carrying passengers, mail and freight.

The promoters still promised Québec and, Moody wrote, organized two new companies, the Waterville & Wiscasset to connect Weeks Mills via Vassalboro to Winslow and the Franklin, Somerset & Kennebec to continue through Waterville to Farmington.

The result of this second failure was that the W&Q went bankrupt. In 1900, according to the history on the WW&F’s Alna museum website, Leonard Atwood bought the Wiscasset to Albion and the Weeks Mills to Winslow lines, three engines and 60 or more cars, mostly freight cars. He renamed the line the Wiscasset, Waterville & Farmington Railroad, though no one cites evidence he aimed for either Waterville or Farmington.

(An on-line genealogy says Atwood was born in Farmington Falls in 1845, and served two years in the Union navy during the Civil War. His mechanical interests led him to invent elevator machinery that he installed in hotels in the 1870s. After selling his patents to Elisha Graves Otis [founder of the Otis Elevator Company], he moved to Nova Scotia and organized a narrow-gauge railroad south from Yarmouth in the early 1890s, before he became president of the WW&F. He died in 1930.)

By 1902 the WW&F line to Winslow was finished and the new company had a new Forney engine, a new passenger car and a new combination passenger/mail car. In the next few years, as North Vassalboro mills expanded, the Winslow route became the main line. But, Moody wrote, the railroad failed to generate enough income to repay debts, keep up with maintenance and show a profit.

In 1906, W. W. Woolworth Company Vice-President Carson Peck bought the WW&F for $93,000, “after spirited bidding,” the museum’s website says. Peck renamed the company the Wiscasset, Waterville & Farmington Railway (not Railroad); paid off its debts; and bought three classy engines, a Forney from the Bridgton & Saco and two new Baldwins, one designed for freight and one for passenger cars, that were bigger than any the WW&F had owned before.

For another two decades, Peck and after his death in 1915 his heirs ran a slowly-declining business. The decline was partly because cars and trucks took over passenger and freight movement.

The museum history says after the owners started asking for dividend payments in the early 1920s, maintenance and service began to suffer. The line was discontinued from North Vassalboro north to Winslow, passenger service from Weeks Mills to North Vassalboro ended and Wiscasset to Albion was again the main line. 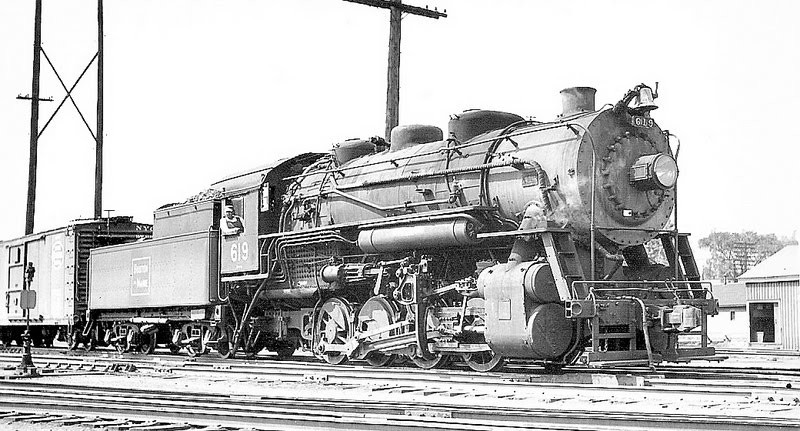 By 1926 the Peck heirs were ready to sell the railway. Local people raised the $60,000 asking price, and, Moody wrote, long-time General Manager Sam Sewell continued to run the business. But with profits small or non-existent and service and maintenance still being cut, in 1930 a Palermo lumberman named Frank Winter was able to buy the company for $6,000 (Moody said there was $5,000 in the till, so Winter actually got it for $1,000).

Winter’s main interest was to keep trains running to ship timber from his land. Moody wrote that maintenance focused on engines (including the defunct Kennebec Central’s), flatcars for lumber and the mail car that generated $9,200 a year.

The final trip on the WW&F was on June 15, 1933, when the remaining useable engine, heading coastward from Albion, left the track in Whitefield and slid down the bank toward the Sheepscot. Engineer Earl Keefe and the other three crewmen were unhurt; they continued to Wiscasset on what the museum history calls a motor railcar.

Winter continued to transport the mail and a postal clerk in a rented truck until October 1933. He did not abandon the idea of selling the railway for another three years, during which vandals and souvenir-hunters damaged stock and buildings. Eventually, most that remained was sold for scrap metal or allowed to fall down.

Next: what the railroad that didn’t get to Québec did for the central Kennebec Valley area; and what’s left in 2020. 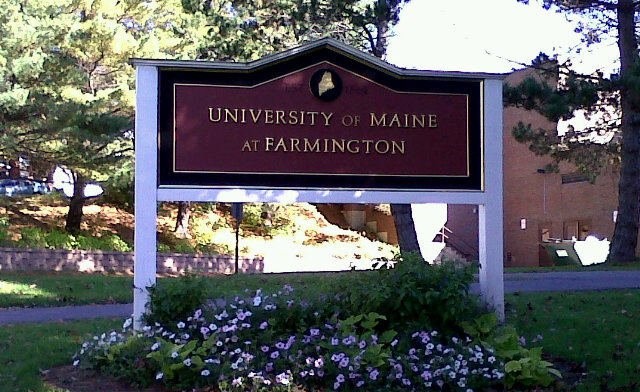 The University of Maine at Farmington announced its dean’s list for the fall 2019 semester.