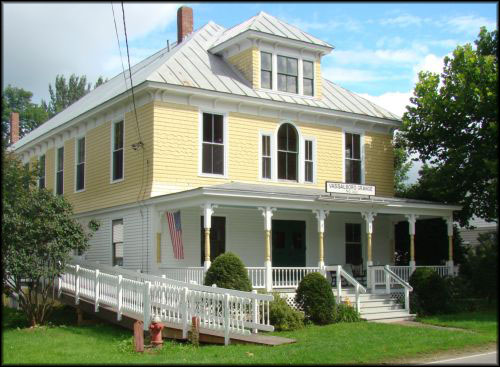 The mother and father of all United States agricultural organization is the Grange, formally known as the Order of Patrons of Husbandry. The national Grange was organized in Washington, D. C., on Dec. 2, 1867, by a seven-person group headed by Oliver Hudson Kelley (1826 – 1913), a Bostonian who moved to Minnesota in 1849 to become a farmer.

A Grange historian quoted in Ruby Crosby Wiggin’s Albion history wrote that the organization was a response to the “depressed condition” of agriculture after the Civil War. The 1873 financial panic hastened its growth.

In 1864, Kelley, working for the national Bureau of Agriculture, inspected post-war farming conditions in the southern states. He realized the need to help farmers earn their living from their land, found like-minded friends and created the Grange.

Kelley intended the organization as “an agricultural fraternal order,” not unlike Masonry, with rituals, named offices, degrees and an aura of secrecy, Maine Grange historian Stanley R. Howe wrote in a 2010 article reproduced on line.

“Fraternal” was never accurate, however; Howe credited Kelley’s niece, feminist Caroline A. Hall, with gaining women near-equality in the Grange. They had voting rights from the beginning and four of the 16 elected offices in each Grange are exclusively for women.

(Online information says in 1893 the Minnesota Grange elected a woman named Sarah Baird as the first female state Grange President [Master] in the United States. Minnesota’s current state Grange president is a woman, and so is the president of the national Grange, for the first time: Betsy Huber, of Pennsylvania, a Granger since she joined a Junior Grange at age five, has been national president since 2015.)

The name Grange comes from Great Britain, where the part of an estate used for agriculture was called the grange, Howe explained.

As the organization developed and spread, four main purposes emerged.

Economic improvement remained central. Means included cooperative stores, where the organization bought in bulk and sold to members at cost; discounts on things like life and health insurance; and spreading information about improved agricultural techniques, new machinery or seeds and other benefits to farmers.

Education, agricultural and general, was important. Granges published reports, newspapers and bulletins; many Grange halls had libraries; most Granges sponsored educational presentations on topics important to local farmers and the community; many hosted classes and workshops.

Having an organization that operated locally, state-wide and nationally gave Grangers political clout. One of the first national efforts was to pressure Congress to lower railroads’ shipping rates so that farm products could be sent to market more cheaply. Grangers also wanted grain elevators’ charges controlled.

The Grange lobbied for the postal service’s Rural Free Delivery system, so that isolated farmers would not have to choose between driving miles to the post office or paying a commercial carrier to pick up their mail. Grangers supported a variety of national cooperative farmers’ institutions; one source says they were instrumental in making the head of the United States Department of Agriculture a member of the President’s Cabinet in 1889.

Complementing these economic, educational and political goals, at the local level the Grange became the social center for rural towns across the country, providing a community meeting hall and sponsoring suppers, dances and local and imported entertainments. One historian called this function especially important to rural women, who were more isolated than the men.

In 1918, according to that year’s Maine Register, W. J. Thompson, of South China, was Master of the state Grange. His wife held the position of Flora (one of three ritual stations, with Ceres and Pomona, Howe explained) and D. E. Foster, of Augusta, was Steward.

Political positions the Maine State Grange took included supporting funding for local schools and the University of Maine and opposing the repeated efforts to move the state capital from Augusta. Augusta’s Maine Farmer newspaper, published from 1823 to at least 1900 (see The Town Line, Nov. 26, 2020), was a Grange publication.

The organization promoted causes that benefited not only farmers, but other segments of society. Howe mentioned sending care packages to soldiers overseas during World War II and building and supporting Grange Cottage to house orphans at Goodwill-Hinckley School, in Fairfield.

Since 1945, the Maine State Grange has been headquartered on State Street, in Augusta.

A current on-line list from the Maine State Grange says there are 103 active Granges in Maine, counting both local and county Granges. Local ones listed are Benton Grange, Fairfield Center’s Victor Grange and Branch Mills Grange, in Palermo; Vassalboro Grange, in East Vassalboro, should also be on the list, according to its Facebook page.

Albion Grange #181 was one of the earlier local Granges, past and present. Maine State Grange Master Nelson Ham oversaw its organizational meeting on July 6, 1875, historian Ruby Crosby Wiggin wrote. There were 36 charter members: 34 couples, the son of one couple and an unmarried woman.

Wiggin said in 1875, only farmers and their families were eligible to join the Grange. Doctors, storekeepers and all other non-farmers were excluded.

In 1873, Albion residents had organized a local stock company to build a community hall. The hall was finished in 1874, and the first Grange meeting was held there.

Until January 1881 Grangers rented the hall only for meetings. In January 1881, the Stock Company leased it to the Grange at $35 a year, and in 1886 the Grange bought the building.

By 1892, Henry Kingsbury wrote in his Kennebec County history, Albion Grange had 150 members. In 1902, the Maine State Grange Proceedings says there were 252 members.

In 1903 Grangers added a dining room to their building, which they still used when Wiggin published her Albion history in 1964. On-line sources suggest the Grange had been re-established in 1957, probably after an interval of inactivity.

In Augusta, records show two Granges. The earlier, Capital Grange #248, was organized April 7, 1883, according to Capt. Charles E. Nash’s chapter on Augusta in Kingsbury’s history. The second Capital Grange Master was Samuel L. Boardman, who wrote the chapter on agriculture in the same book.

On Nov. 12, 1901, according to records of the national Grange, Brother Obadiah Gardner carried an invitation to those attending the national convention to visit Augusta on Nov. 19, traveling by train. The flowery letter was signed by Capital Grange Master G. M. Twitchell and Augusta Board of Trade President C. B. Burleigh.

Attractions included touring the city and the State House; meeting Governor Hill and his wife at “the mansion of the late Hon. J. G. Blaine, which remains as it was when he did his great work”; and visiting “the national home at Togus,” then caring for 2,600 Civil War veterans.

The Grange records say that Brother W. K. Thompson, of South Carolina, moved to accept the invitation. Discussion was postponed from the morning to the afternoon session, when Brother Thompson’s motion was “considered at considerable length and unanimously adopted.”

(Obadiah Gardner [1852-1938], a Michigan native who moved to Maine in 1864, graduated from Coburn Classical Institute, in Waterville, and farmed in the Rockland area, was Master of the Maine Grange from 1897 to 1907. He ran unsuccessfully for governor in 1908; was appointed to the United States Senate in September 1911, after William P. Frye died in office; and lost his re-election bid in 1912, leaving the Senate March 3, 1913. He was then appointed to the International Joint Commission to deal with boundary-water issues between the United States and Canada, on which he served until 1923.)

In 1902, M. F. Norcross, the Deputy of West Kennebec County, reported on his Nov. 21 visit to Capital Grange, which then had 60 members. He found there were “[n]ew rituals and badges,” and the members were much interested in “working the third and fourth degrees” under a capable Master. “Bound to succeed,” he summarized.

Later references to Capital Grange are hard to find. The on-line index to the University of Maine’s Raymond L. Fogler special collections library says the library has 110 years of Capital Grange treasurers’ records, from 1883 to 1993.

Capital Junior Grange seems to have been created in or before 1955 and to have lasted until at least 1961.

North Augusta Grange #348 was founded in or before 1899 and existed until at least 1973. In the 1902 Proceedings of the Maine State Grange, Norcross, reporting as Deputy for Kennebec County, said North Augusta Grange had 126 members and a Degree Team and appeared to be doing well.

Nineteen pages later in the same book, Norcross, listing himself as Deputy for West Kennebec County, reported on his Nov. 4 visit to the North Augusta Grange. The Master told him meetings had been suspended temporarily “on account of a drama.” Norcross gave no details, but commented, “It is hoped that the work that the Grange is designed to do is not made a secondary matter.”

19 Granges in the central Kennebec River valley, in the order in which they were founded (as nearly as this writer can determine)

Clinton Grange #287; March 1888 (according to Kingsbury; this date is out of sequence).

19 Granges in the central Kennebec River valley, alphabetical by municipality

Waterville had none, apparently.