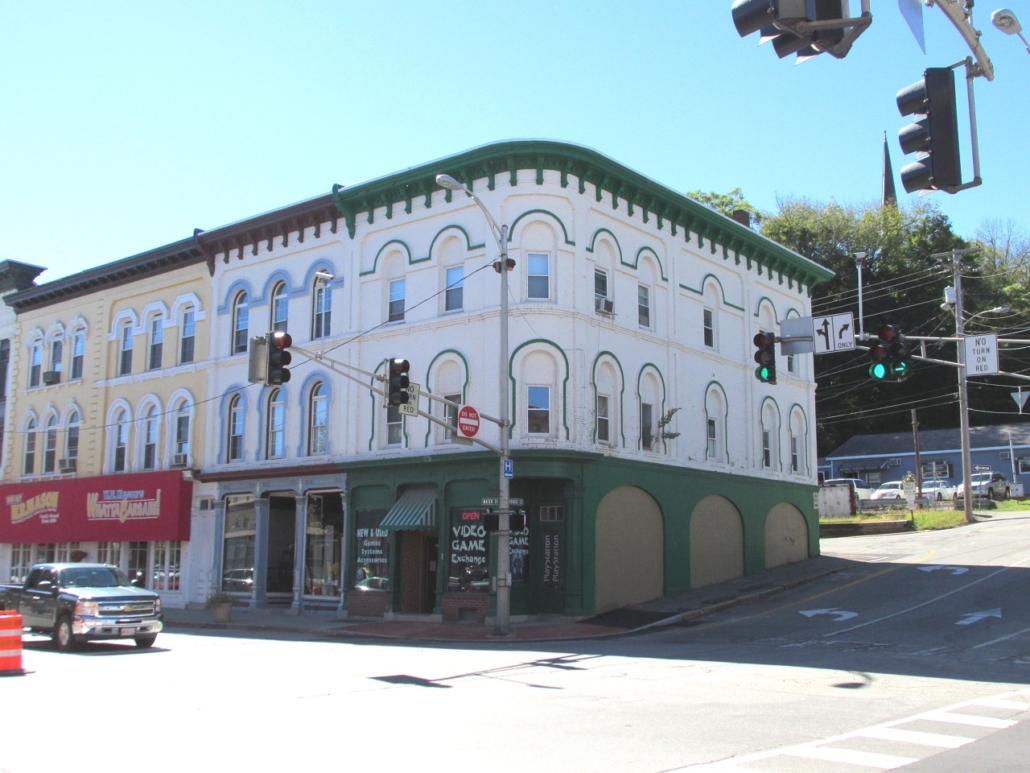 The east (river) side of Augusta’s Water Street has another individually-listed 19th-century historic building besides those described in The Town Line articles published Feb. 4 and Feb. 11. The 1899 five-story brick building at 325-331 Water Street was first known as the Gannett Building, later as the “Journal” Building and now as the University of Maine at Augusta’s (UMA’s) Handley Hall. 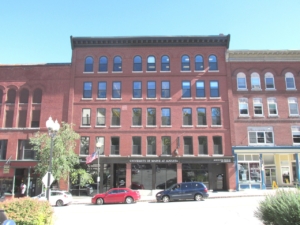 The Gannett Building was presumably named for Augusta publisher William Howard Gannett (1854-1948), who published magazines in Augusta beginning in the mid-1880s (see The Town Line, Nov. 12, 2020). It was designed by Arthur G. Wing, described in Wikipedia as a local architect who died in 1912; this writer found no additional on-line information about him.

Wikipedia calls the style commercial Renaissance Revival. There are three street- level store fronts and above each four stories with three windows each, the whole topped by a cornice. The windows have granite sills; the most conspicuous arches are on the fourth floor.

According to Wikipedia, this building was the first owned, as opposed to rented, home for Augusta’s Kennebec Journal newspaper. Often described as Maine’s oldest continuously published newspaper, the Kennebec Journal began in January 1825 as a four-page weekly produced by Russell Eaton and Luther Severance.

Augusta became Maine’s capital in 1827, and after state government became established in 1832 the Kennebec Journal gained importance and a new revenue source. It became a daily paper on Jan. 1, 1870.

Various people owned the newspaper in the 19th century. The Gannett family was not involved until mid-1929, when William Howard Gannett’s son Guy P. Gannett (1881-1954) added it to the Gannett Publishing Company papers.

A Jan. 8, 2015, Kennebec Journal article by Craig Crosby on the 190th anniversary of the newspaper says the younger Gannett moved headquarters to a Willow Street building his father had previously owned. Apparently the move was soon after the June 1929 purchase. Crosby fails to say where the move was from, leaving uncertain the date the Journal left what was presumably by then called the “Journal” building.

At another unstated time the University of Maine at Augusta bought the building and contracted with WBRC Architects Engineers to change it from office space into art and architecture teaching areas, with a ground-floor gallery. A WBRC web page shows the exterior, labeled Gannett Building, and says interior work included undoing earlier changes to uncover “wooden beams, punched tin ceilings, masonry walls and wooden floors.”

(According to its website, the WBRC firm was founded in Bangor in 1902 by two young University of Maine engineering graduates named John F. Thomas and C. Parker Crowell; the firm was Thomas and Crowell. Thomas soon moved to Massachusetts; Crowell stayed with the firm for the next 54 years, with its name changing as partners joined and left.

The ninth name, in 1987, was the longest: Webster/ Baldwin/ Rohman/ Day/ Czarniecki. By 1989 Day had left and Bromley and Rich had joined; the new group chose the initials WBRC, and so far no one has changed it. WBRC has branches in Portland, Maine, and in Florida, Maryland and Michigan.)

UMA gave the building its third name, Handley Hall, in honor of UMA’s first female president, Allyson Handley. She took office on March 1, 2008, at the age of 60, and held the post for six years.

A 2018 announcement of her becoming president of the Johns Hopkins Alumni Association says UMA was the third college she served as president. It credits her with changing UMA’s undergraduate architecture program to “a four-year, accredited architecture degree,” giving graduates a head start in the profession.

The “Journal” building was added to the National Register of Historic Places on May 2, 1986, at the same time as the buildings described below and the Kresge and Doughty blocks and the Masonic Temple discussed in the Feb. 11 issue of The Town Line. 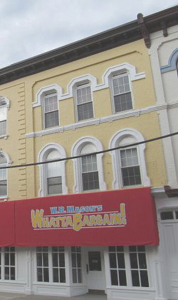 On the inland (west) side of Water Street, starting at the north end, listed buildings include a four-building block built after the 1865 fire described in the Feb. 4 The Town Line article. They are the Sturgis and Haskell Buildings, 180-182 Water Street, and the Noble Block, 186 Water Street, both built in 1867; and the Whitehouse Block at 188 Water Street, built in 1865 (since the fire was in September 1865, it must have been constructed in a hurry).

The brick buildings are three stories tall, in the commercial Italianate style, and connected by a cornice. The northern two are off-white with two different types of blue window trim, the southern two yellow with white window trim. The style of window trim varies not only from building to building but between second and third floors on each building.

Each separate building would have a single street-level entrance and triple windows on the second and third floors, except that the northernmost, and last finished, Sturgis and Haskell Building has a rounded corner as it fronts the intersection where Bridge Street comes downhill to meet Water Street. There are only two east-facing windows on the upper floors overlooking Water Street; the third windows face northeast from the rounded corner.

Architect John C. Tibbetts, of Augusta, designed the double building for Ira Sturgis and Erastus Haskell. A 1985 Maine Historic Preservation Commission inventory says the original cast-iron store fronts at sidewalk level remained, but with larger-paned windows. Arches above the windows at 180 Water Street had been filled in to make the windows square-topped. The building at 180 was then owned by Carrie Chan and 182 by Peder K. Baughman.

Tibbetts also designed the Noble Block next south, for Thomas C. Noble. Wikipedia says the first story of the Noble Block was finished in 1865 and the upper floors in 1867.

Portland-based architect Francis H. Fassett, whom readers met before as designer of the Williams Block on the east side of Water Street (see the Feb. 4, The Town Line) designed the southernmost and first-built of the four buildings for Owen C. Whitehouse. Before the fire, Whitehouse had his dry goods store on the same site. In the new building, Wikipedia says Whitehouse’s dry goods store was on the second floor; street-level tenants included “Augusta Savings Bank and the United States Pension Agency.” Fraternal organizations, unspecified, used the top floor.

Ira Daggett Sturgis (1814 or 1815 -1891), oldest son of James and Nancy (Packard) Sturgis, was a Vassalboro farmer turned lumber baron whose family began operations in The Forks, farther up the Kennebec River, in the 1830s.

During the 1840s and 1850s, Sturgis and a half-brother ran water-powered sawmills in Vassalboro, and he bought large tracts of timberland in the northern Kennebec Valley. Captain Charles E. Nash, author of the chapters on Augusta in Henry D. Kingsbury’s Kennebec County history, says Sturgis’s factory on Seven Mile Brook, in Vassalboro, built wooden items, including “the first orange and lemon boxes ever exported from the state of Maine.” His nearby shipyard built ocean-going vessels.

Sturgis shifted his interest to Augusta briefly; spent the late 1850s and early 1860s in the lumber business in Aroostook County and New Brunswick; and returned to Augusta.

Nash says Sturgis made production of steam power cheaper by using sawdust as fuel. A second steam-powered mill in Pittston was soon accompanied by a modern ice house. Sturgis established the connections that made Kennebec River ice familiar in major cities in the southern United States (see the May 14, 2020, The Town Line for more information on ice harvesting on the Kennebec).

In February 1870 a flood washed away a substantial part of the Augusta dam, the fourth time it had been damaged since it was first built in 1837. Sturgis oversaw its reconstruction in July 1870, supervising engineer Henry A. De Witt and the work crews.

Erastus Haskell (1815 – 1891 or 1892), was born in Winthrop. He learned the shoe trade in Waterville and worked in East Vassalboro for three years, moving to Augusta Dec. 1, 1840. Before the 1865 fire, he ran a shoe store on the east side of Water Street, in one of the buildings that burned. The New England Business Directory lists him as an Augusta boot and shoe dealer in 1883 and in 1889.

Haskell served as a City of Augusta assessor for three years, and “served three years in each of the branches of the city government,” according to Nash. He married Mary C. Williams; they had two sons and daughter. Haskell died in Augusta and is buried in Mount Pleasant Cemetery.

Probably the Thomas C. Noble who was eager to have a new building in 1865 was the older, who would have been 58 by then, rather than his son, barely 20.

Owen C. Whitehouse was one of nine children of Vassalboro residents Daniel Whitehouse, Jr., and Merab (Coleman) Whitehouse. With his older brother Seth he went into the dry goods business in Augusta in 1846. The S. C. and O. C. Whitehouse company “did a large and successful business,” Nash wrote.

Whitehouse had other business interests besides dry goods. A 50th anniversary history of Augusta Savings Bank, founded Aug. 10, 1848, lists him as added to its incorporators in 1852. When the 1833 Freeman’s Bank was reorganized on April 6, 1864, as Freeman’s National Bank, he was one of the directors. The 1877 Maine Register shows him as a dealer in wool and skins at an unspecified Augusta location and a seller of flour and grain on Water Street.

Whitehouse also served his city. Annual reports show he was a fence viewer and a tythingman in 1870-71, and an overseer of the poor in 1883. (Tithingman is the modern spelling, and the term, originally related to keeping order in church, by the 1870s probably referred to a local constable.)