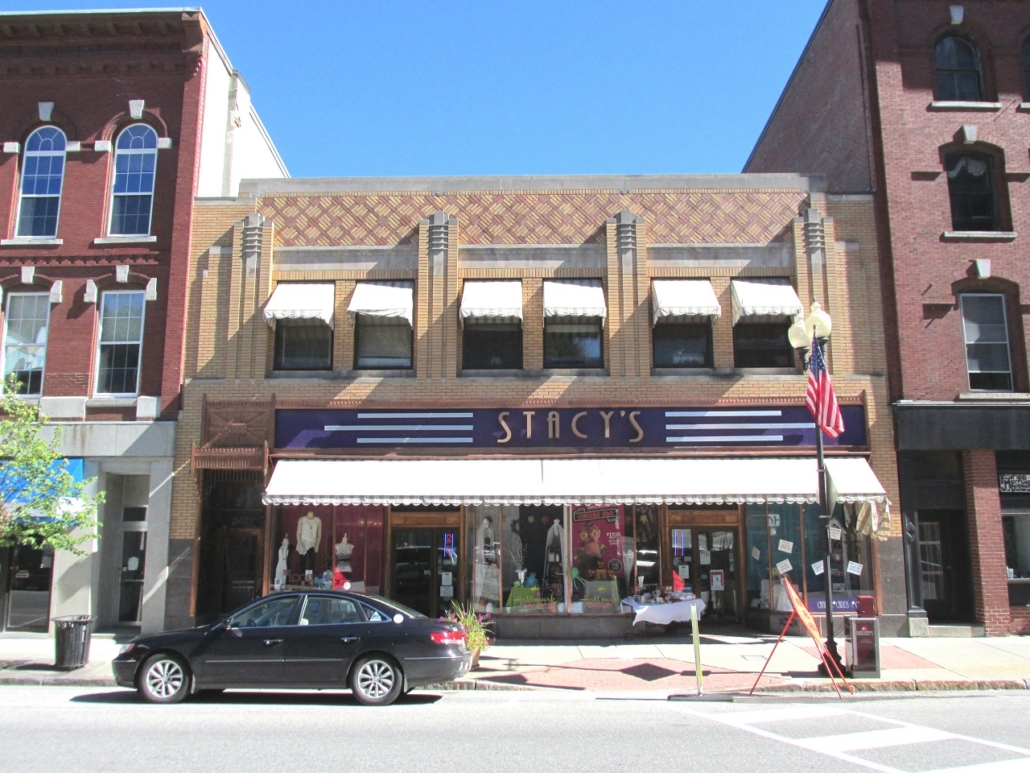 Last week’s exploration of Augusta’s Water Street Historic District talked about the designated historic buildings on the northern half of the east (river) side of the street. This article will continue south along the river.

The Kresge Block at 241-249 Water Street is the newest of the Water Street buildings that rate individual Historic Places recognition. It was built in 1932 for S. S. Kresge’s five and dime store (which Wikipedia calls a department store).

(Sebastian Spering Kresge [July 31, 1867 – Oct. 18, 1966] was a Pennsylvanian who founded the S. S. Kresge chain of discount stores and the Kresge-Newark department stores. Bowdoin College’s Kresge Auditorium is named in his honor. The S. S. Kresge stores became Kmart in 1977.)

Before the Kresge Block, Augusta’s Museum in the Streets on-line brochure says, an Italianate building on the site housed Dirigo Business School, identified in 1886 as Dirigo Business College, which opened in 1867 and operated from various locations. An online source calls it a two-campus school when it lost accreditation and closed in 2003.

Wikipedia calls the Kresge Block “a distinctive and rare local example of commercial Moderne architecture.” The Museum in the Streets uses the term “Art Deco.”

Although built of the same brick and granite as its neighbors, the Kresge block stands out. It is only two stories tall, and its tan-colored bricks contrast with the reddish ones on either side. Between the second-floor windows, which are rectangular without arches, elegant three-piece pilasters rise to a flat front with, per Wikipedia, “a multicolor crosshatch brick pattern.”

The ground floor has a double storefront, metal-bordered windows (some sources call the borders bronze, others copper) and on the north end an entrance to the second floor with a metal hood above it. Professional offices occupied the second floor in the 1930s.

The Museum in the Streets says the Kresge store opened in a 4,500-square foot space. Amenities included “mahogany counters…and a modern soda fountain.”

In 1978 or 1979 Richard Cummings bought the building, which then housed a Jupiter Discount Store. He moved Stacy’s, the Hallmark stationery store he had opened in 1973 and named for his daughter, Stacy Gervais, into the ground floor. In 2007, the family restored the front of the building to its 1932 look.

A Dec. 14, 2015, Kennebec Journal article by Jessica Lowell announced the store’s closing at the end of the year, after almost 43 years in business. The article said Augusta developer Tobias Parkhurst would buy the Kresge Block in January 2016 and planned to rent two second-floor apartments and two separate ground-floor retail spaces.

Lowell’s article quoted Parkhurst and others involved in real estate who said the market for downtown buildings has turned upside down as shoppers drive to suburban malls and strips. In areas like Augusta’s Water Street, street-level retail spaces have lost value, while upper-floor office space and apartments are sought after.

The Kresge Block was added to the National Register of Historic Places on May 2, 1986. 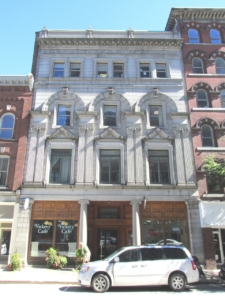 Continuing south, the Vickery Building at 261 Water Street is another granite building, like the Libby-Hill Block described in the immediately previous article (see The Town Line, Feb. 4). Designed by John C. Spofford, it was built in 1895 to house Peleg O. Vickery’s printing and publishing business (see The Town Line, Nov. 12, 2020, p. 10).

John Calvin Spofford (Nov. 25, 1854 – Aug. 19, 1936) was born in Webster, Maine. (The 1886 Maine Gazetteer describes Webster, incorporated in 1840, as the town immediately east of Lewiston, also bounded by Wales, Litchfield, Bowdoin and Lisbon. After some boundary changes with its neighbors, in 1971 its name also changed; instead of honoring statesman Daniel Webster of New Hampshire, it now honors Anasagunticook Chief Sabattus.)

Spofford’s training and career were primarily in the Boston area, but he designed buildings in Bangor, Belfast and Lewiston as well as Augusta. In 1890 and 1891 he designed the first addition to the Maine State Capitol.

The Vickery Building is four stories tall. As described in Wikipedia, it is in Italianate commercial style, with Ionic columns on each side of the recessed street-level door; elaborately trimmed windows on the second and third floors; and smaller fourth-floor windows topped by more trim and a parapet.

The Vickery Building was used commercially for most of its existence. The 1915 Maine Register contains an advertisement for C. E Downing Insurance in the Vickery Building. A May 5, 2020, Kennebec Journal article, again by Jessica Lowell, says until it went up for sale sometime before 2017, occupants included medical offices, the Vickery Café, the Children’s Discovery Museum and a drugstore.

In 2017, Andrew LeBlanc and Jona­than Miller, partners in Mastview Development, bought what Lowell describes as four adjoining buildings and began converting them into apartments. The new Vickery has 23 one- and two-bedroom apartments, she wrote, with monthly rents from $1,000 to $2,100.

She quotes LeBlanc and Miller as saying they want to preserve the historic exterior appearance of Water Street while providing comfortable modern living spaces that they expect will attract residents of varied occupations and income levels.

The Portland Builders website gives the building address as 257-271 Water Street and says a historic preservation grant helped create 13 of the apartment units. More information about the Vickery apartments is available on line at www.thevickery.com.

The 1895 Vickery Building was added to the National Register of Historic Places on March 22, 1984. 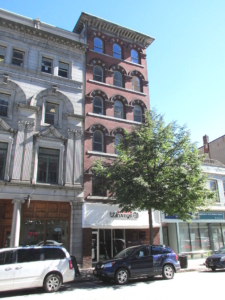 Immediately adjoining the Vickery Block, and if the address on the Portland Builders website is correct incorporated into the contemporary Vickery, is the Doughty Block at 265 Water Street. Built in 1890, it is the only six-story building in downtown Augusta. With only three windows across its façade, it is narrower as well as taller than its neighbors.

The exterior is brick, with arches over the windows, five horizontal stone bands separating the floors and a conspicuous cornice extending its flat roof. The online Maine encyclopedia calls its design “somewhat odd”; Wikipedia says it combines Italianate architect, by 1890 going out of style, with Renaissance, just coming into fashion.

Captain Charles E. Nash, author of the chapters on Augusta history in Henry Kingsbury’s Kennebec County history, says Charles F. Fletcher was born on Church Hill in northeastern Augusta in 1846. He began his career as a builder in 1873, and in 1889 partnered with George C. Robbins, of Sidney.

Church Hill was named for Samuel Church, who migrated from Connecticut to Maine around 1780 and settled in Augusta in April 1800. The contemporary Church Hill Road is on the east side of the river and runs north from Route 3 into southwestern Vassalboro.

The Doughty Block, like the Kresge Block, was added to the National Register of Historic Places on May 2, 1986.

Continuing south past the intersection of Water, Winthrop and Front streets, the Masonic Hall at 313-321 Water Street is another of John Spofford’s designs. Wikipedia calls it “a restrained interpretation of the Renaissance Revival.”

The 1894 building is four stories high and has enough street frontage to allow for five separate retail areas. Built of red brick, it has an arch over the center entrance and more arches over the top-floor windows, which are connected to the third-floor ones by brick columns.

In 1970, George R. Caswell wrote a history of the building and some of its occupants. The Maine State Library’s copy is available online.

Caswell’s sources included a June 14, 1915, speech by Henry E. Dunnock in observance of the Trinity Commandery’s 50th anniversary and a Jan. 18, 1919, speech to the Abnaki Club, by Lewis A. Burleigh. According to them, the building was the fifth permanent home for Augusta Masons (the third was a victim of the 1865 fire [see The Town Line, Feb. 4], and the organizations met in temporary quarters in an attic for a few months).

Caswell credits Herbert M. Heath for the hall and for founding the Abnaki Club. On May 14, 1894, Heath created the Masonic Building Association, with $40,000 in capital and a board of directors consisting of five members from each of four Masonic groups: “Bethlehem and Augusta Lodges, Cushnoc Chapter # [,] Trinity Commandery and 103 Masons.”

The Association paid Edwin C. Burleigh, Thomas H. Lang and Eugene Whitehouse $9,000 for the Water Street lot and hired Spofford to design the building. On June 14, 1894, they held a cornerstone-laying ceremony that began with a 500-person parade, reviewed twice by Governor Henry B. Cleaves and the Grand Master of the Grand Lodge of Maine, Horace H. Burbank.

Caswell includes a list of the cornerstone’s contents. Among them were documents relating to the Masonic lodges, lists of 1894 state and city officials, two pictures of wooden buildings that had previously occupied the site, a photograph of Spofford and copies of the June 14, 1894, issues of the Kennebec Journal, Maine Farmer and New Age, Augusta’s three newspapers of the time.

The Masonic Temple was dedicated on April 18, 1895, the first day of a five-day Great Masonic Fair that raised more than $5,000 toward furnishing the new temple.

Caswell found Abnaki Club records showing the organization spent almost $4,000 on its rooms, which included a smoking room, a billiards room, an Octagon Room, a parlor and a cloakroom and passageway. One expenditure was to have the word “Abnaki” in a panel in the floor outside the Octagon Room; the passage and room floors and the panel were all made of oak. By the time Caswell wrote, the wood – and the word – were hidden under linoleum.

The Masonic Hall, now listed online as Bethlehem Lodge, at 317 Water Street, was added to the National Register of Historic Places on May 2, 1986, at the same time as the Kresge and Doughty blocks.

Next: still more historic buildings on Water Street, in Augusta