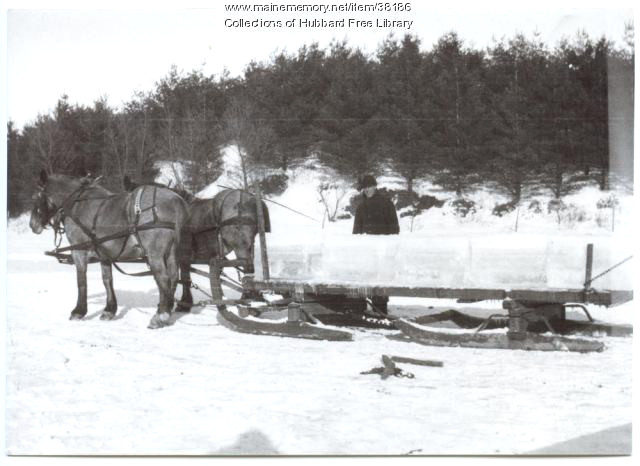 Horses and sleds were used to move ice blocks.

In addition to the mills and factories described in the previous article in this series (see The Town Line, May 7), two other uses for the Kennebec (and other Maine rivers) were transporting wood – long logs and four-foot pulpwood, for building and for pulp mills – and chopping cakes of ice for export all over the world. The log drives were mainly north of the Waterville-Augusta area, with pulpwood feeding Keyes Fibre, in Fairfield. Ice harvesting was mainly south of Augusta. But, as Jennie Everson shows in Tidewater Ice of the Kennebec River, people involved in the two activities overlapped.

Both businesses saw their heyday in the middle of the 19th century; both declined as railroad freight supplanted riverboat freight and the need for the products lessened. However, the Federal Writers Project Maine guide says barges and schooners continued to export both products into the 20th century.

River driving was at its peak between 1860 and 1890, according to David C. Smith’s A History of Lumbering in Maine 1861-1960. On the Kennebec, it started a bit later and was continuing, though near its end, when his book was published in 1972.

Wood was cut in the fall and winter and stacked near or on frozen streams, river and lakes. After the ice went out in the spring, logs and pulpwood were prodded downstream from small streams into larger ones, across lakes and eventually to and down the Kennebec River.

The wood normally reached mills in Waterville and Augusta in August or September. Driving ended for the season when streams began to freeze.

River-drivers herded the logs downstream, sometimes from boats, sometimes standing on the floating wood. They used long poles; peaveys, poles with curved hooks on the end used to grasp and move individual logs; and pickaroons, poles with spikes that could be driven into a log to hold or move it. (Peaveys and pickaroons are advertised for sale on the web today.)

Driving pulp and especially long, heavy logs down an ice-cold, swift-moving river was strenuous and often dangerous work. Logs would run ashore and get caught on rocks. They would pile up in head-high jams that had to be untangled and, when the key log was freed, would tumble tumultuously downstream. They would float uncontrollably seaward in floods. Heavy rain in the spring of 1887 washed almost 10,000,000 feet of timber down the Kennebec into the Atlantic, Smith says.

Smith’s description and random paragraphs in Kingsbury’s history suggest that river-driving was a young man’s job. Kingsbury mentions three Benton men who worked as river drivers. Jackson Fitz Gerald, born in 1815, was a river driver as a young man and later a farmer (Kingsbury gives no dates). William F. Wyman, born in 1824, moved from river-driving to farming in 1855. Alpheus Brown, born in 1837, was a river driver until September 1864, when he joined the army; he was a dam builder from 1866 until 1890 and then a farmer. 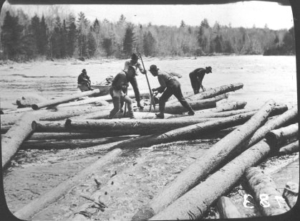 The Kennebec Log Driving Company was organized in Gardiner on March 27, 1835, with 63 sawmill owners as its members. Members jointly built dams and booms to hold the logs in check, hired drivers, sharing the costs according to each members’ proportion of the logs. (A boom is a series of chained-together logs, often anchored to cribs – square wooden structures in the river filled with rocks – as well as to the shore, to hold back floating timber.)

Kingsbury credits Ira D. Sturgis (again see The Town Line, May 7), a businessman with interests in Augusta, Vassalboro, Nova Scotia and elsewhere, for persuading fellow lumbermen to build many of the booms along the central Kennebec, including one at Five-Mile Island, in Vassalboro, and another in Hallowell. These improvements, Kingsbury says, made it less expensive to separate logs and send them to the owners’ mills.

According to a September 8, 1976, New York Times article archived on the web, the Kennebec Log Driving Company ran the last log drive on the Kennebec in the summer of that year. Writing from Skowhegan, the Times reporter said about 30,000 cords of four-foot pulpwood were boomed about eight miles upstream of the Scott Paper Company’s mill, in Winslow.

The pulp had started downriver from Moosehead Lake in March and the drive was expected to end in October, the article said. Trucks would take over pulp-hauling.

Ice harvesting on the Kennebec began in the 1820s and, according to Jennie Everson’s Tidewater Ice on the Kennebec, flourished from the 1850s to the end of the 19th century and ended around 1920. Everson was born in 1890, and her family lived on the river in Dresden in a large house where some of the higher-ranking ice company employees often boarded. Parts of her generously-illustrated book are based on her personal experience.

Dean Marriner, author of Kennebec Yesterdays, also saw ice-harvesting first-hand during his first year at Colby College in 1909-1910. He describes watching hundreds of men at work on the river south of Augusta.

Marriner says the business started in the spring of 1824 (Everson says 1826), when the brig Orion took floating Kennebec ice to Baltimore and sold it for $700. The first ice houses went up in Gardiner two years later, Marriner says, and building and improving these storage facilities continued for the rest of the century.

Everson lists three ice-houses in Augusta. An 1882 map she includes shows houses on the west side of the river owned by G. E. Weeks and by Getchell and others, with capacities of 2,000 and 3,000 tons respectively. The Getchell business was not far north of the Hallowell line, Weeks’ a bit south of the dam.

By the time an 1886-87 map was published, they were gone and Cony and White owned one with a capacity of 6,000 tons, still extant in 1892 when Kingsbury’s history was published. However, most ice-harvesting was south of Augusta – an 1891 map from the Ice Trade Journal shows four dozen ice houses from the southern edge of Augusta (Cony and White’s) to Bowdoinham and Woolwich, concentrated in Pittston and Randolph.

Ira Sturgis was involved with the ice business, too. Kingsbury says he owned ice houses downriver, including a large one in Wiscasset, and established southern ones in major cities (Washington, Norfolk, Savannah, Charleston and later Philadelphia and Baltimore) so ice could be stored and sold year-round.

In 1895, Bath native Charles W. Morse (Oct. 21, 1856 – Jan. 12, 1933) finished incorporating the Consolidated Ice Company, in Augusta, controlling most of the Kennebec ice-harvesting business. By 1899, Everson writes, his renamed American Ice Company ran all but one ice company on the river (the exception was on Swan Island, in Richmond). American Ice Company also went into the artificial ice business, she says, speeding the decline of river-ice harvesting; electric refrigerators, coming into use by 1815, finished off the industry.

In the 19th century, the working season began after the ice was thick enough, and by then, Everson writes, tree-harvesting was over, so some of the men who had worked as loggers went to work on the river and in the ice-houses.

Everson includes an undated wage table showing that men cutting and loading the ice earned from 15 cents an hour for the lowest-paid categories of workers to 25 cents an hour for a superintendent. In April 1906, for the first time, the workers struck, demanding a 25-cent-an-hour pay raise. To replace the strikers, woodsmen came downriver, and in May a boatload of Italian workers arrived.

The Italians lived in a boarding house close enough to Everson’s farm so that some of them came to buy milk from her father’s dairy. Neither the first nor a second crew stayed after more Maine people came or returned to the ice-house work and the strike petered out. Everson does not say whether the raise was granted.

Work was year-round, because ice that was cut from the river and stored in ice-houses in winter and spring was loaded onto schooners (usually; Everson mentions early 20th-century experiments with steel whalebacks from the Great Lakes and with barges) and shipped all over the world. The major markets were in cities along the east coast of the United States. Everson adds Cuba, Panama, the coasts of South America, India and New Zealand.

Alice Hammond, in her history of Sidney, mentions that residents cut ice for personal use from the Kennebec River and from Messalonskee Lake (Snow Pond) and three smaller ponds in town.