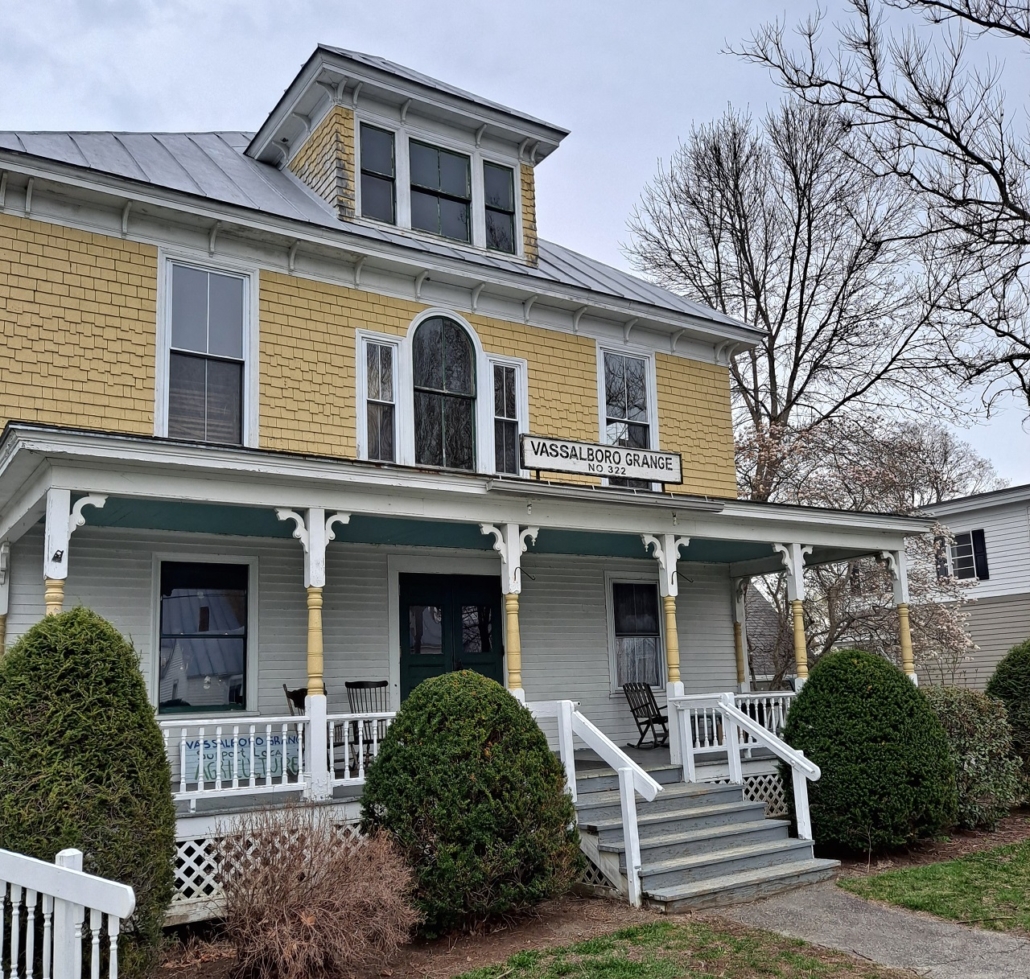 by Mary Grow and Bernie Welch

Historical records show the Town of Vassalboro has had three separate Grange organizations, of which the newest, East Vassalboro, is still active in its 126th year.

East Vassalboro Grange #332 was organized in 1895. On-line Grange records show 171 members in 1902. It was incorporated as a nonprofit organization on Oct. 3, 1910, according to on-line state records.

The Anthology of Vassalboro Tales includes an October 1938 report from an unnamed newspaper describing that month’s East Vassalboro Grange Fair, organized by Lena Kyle, Arthur Mason and Frank Rand and a “dinner committee” consisting of “lady officers” Annie Adams, Edith Canham and Nina Mason. Almost 250 people shared the chicken pie dinner, and about half as many the baked bean supper.

More than 40 pounds of candy made by “Grange ladies and their daughters” were sold. After the baked goods entered in competition had been judged, they also were sold.

At that fair, Annie M. Cates was in charge of the candy. Special prizes were awarded to two lots of vegetables: Dr. Sam Cates took first place and Herbert and Paul Cates took second place. 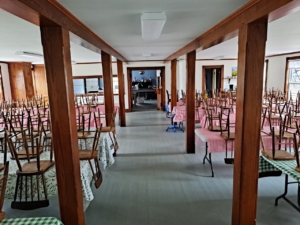 These competent Cates were ancestors, direct and indirect, of Paul Cates, who with his wife Elisabeth founded Cates Family Farm, in East Vassalboro, in 1970. Originally producing only gladiolus, the farm website now advertises heirloom gladiolus bulbs, other annual and perennial flowers, beef cattle, hay and lumber.

Twenty-four babies were in the 1938 baby show, winning prizes for eye color, hair (or lack of hair), youngest (a four-week-old girl) and “from the largest family” (a boy with seven older siblings).

East Vassalboro students from first through eighth grade presented their school exhibit. After supper, a cast of 12 performed Henry Rowland’s Aunt Minnie from Minnesota, described as a “farce play,” followed by dancing “until a late hour with music by the Mosher orchestra from China.”

Alma Pierce Robbins, publishing her Vassalboro history in 1971, was pessimistic about East Vassalboro Grange. Meetings and suppers continued, she wrote, “but with a lessening of interest as the younger generations search for new ways to bring about modern changes.”

At 10 a.m. on the 4th of July 1976, it was pouring a cold rain in Vassalboro. Despite the deluge, the parade started on time in North Vassalboro, heading toward the East Vassalboro Grange to celebrate the 200th birthday of our country. 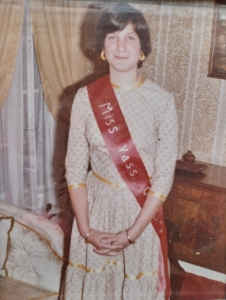 There weren’t enough umbrellas to go around on the tractor-drawn, hay-baled Grange float that proceeded slowly down Main Street (Route 32). A 16-year-old Miss Vassalboro Grange sat soaking atop a bale in the fine dress made by her mother Marj. That evening she came down with pneumonia that made her miss a week of work at her father Ron’s store, Lalime’s Drug Store, in Waterville.

For the privilege of riding on that wet bale that day, she had to write an essay describing how the Grange supported her community and interview Malvena Robbins, her grandmother, who was Grange treasurer for 35 years. For her it was worth it then, and for us it is worth it now, because our Vassalboro Grange has been supporting the greater Vassalboro community all along and intends to do so well into the future.

The East Vassalboro Grange hosts numerous suppers to support fuel funds and other community programs, Grange activities and Grange Hall maintenance. Vassalboro Community School students learn how to serve a meal under the guidance of Jobs for Maine Graduates Master Specialist Victor Esposito, with David Dutton, Lauchlin Titus, Richard Lemieux and others contributing to the meals.

Students and community members enjoy talent shows and open mike, beginning at 7 p.m., the second Saturday of the month at the Coffee House run by Stuart Corson, Holly Weidner and Mathew Freitag. The stage comes alive with music, dance and song, not to mention the coffee, tea and desserts. Fifth Saturday Contra Dances are another Grange calendar feature.

In recent years East Vassalboro Grange has sponsored varied events to entertain and educate area residents and to benefit local causes. Prominent among them have been plays written by Paul Cates (and others), produced and performed by talented community members and using the Grange Hall’s elegant scenery.

Local historical programs have been presented by residents Kent London, Alma Robbins and Vicki Schad. In August 2017 Vassalboro hosted an afternoon of Jane Austen events, presented by a California entrepreneur called Malvena Pearl’s Emporium. Participants could attend workshops on novelist Austen’s late 18th and early 19th century writing implements, her novels, farming in her era and art and sewing; and could enjoy baked goods and beverages and live music and dancing. 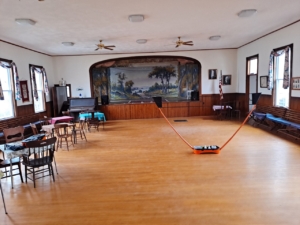 The Grange has hosted the Vassalboro Library Book sale for nearly 60 years, the first weekend after Labor Day.

Since May 2009, the Grange has sponsored indoor-outdoor farmers’ markets through September. At first at the Grange Hall, these events are now held Sunday afternoons at the North Vassalboro mill.

In the recent past the Vassalboro Grange has supported Spring Fever Day, presenting a variety of things to make the garden grow; and The Spirit of Christmas, a craft fair Elisabeth Cates inspires with tremendous support from the Vassalboro Friends and local craft vendors.

There was even socially distance badminton in the Hall during Covid.

The upkeep of the Hall began with Grange Master John Melrose, who made sure the building was painted and kept in top-notch shape. Guy Higgins put in the new windows and ceiling, and Linda and Lauchlin Titus established cleaning protocols and got Ray Breton’s crew to upgrade our kitchen so that it is modern and certified.

Many outside families and organizations have used the Grange for birthdays and other celebrations; school programs; dance programs; and town, political, conservation or community action meetings. We would love to know how many of you readers were married or celebrated anniversaries or births at our Grange.

The future of the Vassalboro Grange is the future of our community. It is a place that welcomes all who would like to join others to learn, have fun or create together in a well-maintained building. It even has excellent internet.

Our Grange membership is open to new ideas and uses for the Grange. Grange meetings, open to all, are held the last Friday of each month. We look forward to hearing from you with ideas. Contact us at http://www.vassalboro.net/grange.html or 207 649 2765.

That girl on the float, the one in the rain? She is Jody Lalime Welch, the Grange master and my wife. The Vassalboro Grange has been a powerful, positive and profound influence on our families’ lives for almost 111 years now. What does a little rain matter, anyway.

(Bernie Welch holds the office of Lecturer in East Vassalboro Grange, but he is content to be called the Grange Master’s husband.)