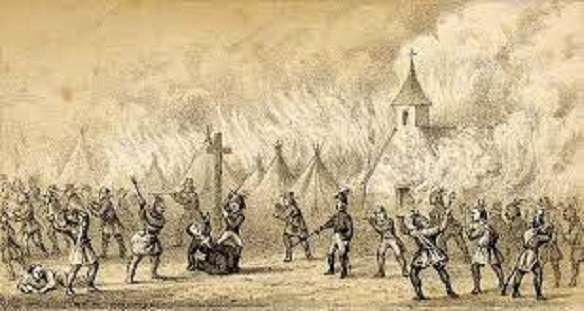 (Read part 1 of this series here.)

Earlier articles in this series have identified the Kennebec River Valley as a throughway connecting the coast and the St. Lawrence River, used by, among others, Benedict Arnold going north to attack Québec in 1775 and Canadians coming south to find jobs in Maine in the 19th century. According to Charles E. Nash’s chapter on the Abenakis in Kingsbury’s Kennebec County history, the route was well-traveled long before the Europeans arrived.

Nash wrote that for the Kennebec tribe of the Kennebec Valley, “The river was their highway and its banks their home.” He described a nomadic life varying seasonally with food resources.

In the winter, he wrote, families moved to the head of the river at Moosehead Lake, where they hunted moose, deer and caribou and caught trout through the ice. When the game animals left their winter yards, the Native Americans loaded their canoes and headed downriver.

They would stop along the way, Nash wrote, especially at waterfalls and at river junctions where migrating salmon and river herring assembled. Usually, their journeys ended at Merrymeeting Bay, where they and other groups spent the summer feasting on fish and shellfish.

Nash described canoes skimming down descending rapids and being carried around those too swift to run. He did not mention the autumn upstream journey, which must have been more difficult.

Along the way, the same camping places were used over and over, to the point where permanent traces were left. Nash described evidence of tool-making and of campfires still visible when the Kennebec County history was published in 1892.

“Flint and stone chippings, with arrow-heads and other articles in all stages of manufacture” were common. The slate used for the tools came from Mount Kineo, near Moosehead Lake, he said.

Nash also wrote, “Many spots where wigwam fires once glowed are yet marked by burned and crumbling stones and by fragments of the earthen vessels in which the feasts were cooked.”

Such “relic places” are spread from Moosehead Lake to Popham Beach, Nash wrote, “but they are almost continuous on the alluvial banks between Augusta and Waterville, which seems to have been a favorite resort or metropolis of the tribe.”

Nash wrote that there were no permanent villages along the river, but other sources list three places that seem to have been inhabited most, if not all, of the year: Norridgewock; Cushnoc, on the east bank of the river in Augusta; and Ticonic, at the junction of the Sebasticook and Kennebec rivers, in Winslow.

Norridgewock, too far north to be part of this series, was dominated by the French; the British built trading posts and later forts at Ticonic and Cushnoc.

Kingsbury considered this junction of two major rivers a natural place for a Native American village. “It was easy of access, renowned for fish and game – just the spot for camp and council, for traffic and recreation.”

An on-line history of Waterville says the village “was estimated to be the second largest Native American settlement in Maine at the time of the first European visitors.” (The article does not name the largest.)

Two sources agree that the burying ground associated with the village was on the west side of the Kennebec. An on-line history says it extended from contemporary Temple Street to the Lockwood/Hathaway mill complex.

Kingsbury wrote the lot that was by 1892 Lockwood Park (near the Lockwood Mill at the northern end of present-day Water Street) had been the site of sequential hotels after the 1840s, until the final building became a tenement and was demolished.

As the site was cleared, he said, workers found “many human bones” indicating the burial site. One of the skeletons was in a sitting position and surrounded by “over 300 copper beads about the size of a straw, from two to three inches long, and punctured from end to end.”

A Native American village attracted British traders. Kingsbury wrote that a 1719 survey showed a building on the southeast side of the Sebasticook-Kennebec junction labeled as a trading house built by Christopher Lawson, dated Sept. 10, 1653.

Lawson had acquired the land from the chief called Kennebis in 1649. In 1653 he “assigned” it to Clark & Lake, a trading company mentioned in various histories.

By 1675, Kingsbury wrote, “Richard Hammond, an ancient trader, and Clark & Lake each had a trading house at Ticonic.” ((In his history of Augusta, James W. North accuses Hammond of stealing the Kennebecs’ furs.)

By then, too, although the British were theoretically not allowed to furnish either guns or liquor to Native Americans, tribes had become dependent on guns for hunting. Williamson wrote that the Kennebecs were starving, because the British had driven them from their corn fields and had denied them hunting supplies.

Williamson described an early 1676 meeting at Ticonic between British representatives and tribal chiefs, who asked for powder and ammunition. The British denied the request, saying they feared the Kennebecs would hand them on to tribes farther west who were on the warpath. So, Mitchell said, the Kennebecs attacked the British settlers, beginning the first of the series of wars that lasted from 1675 until 1759.

In 1676, the Native Americans killed Hammond and Lake, Kingsbury wrote. They evidently seized the buildings, rather than burning them, because various sources refer to Europeans being sent as captives to a Native American “fort” at Ticonic in the 1780s and 1690s. This fort was burned in 1692, one source says, by the Kennebecs.

This first war ended with a peace treaty that Harry Edward Mitchell, author of a 1904 Winslow Register found on line, called temporary, because “The two races were naturally repellant.” War did indeed resume, with occasional intervals of peace. Europeans, their livestock and their pets were killed, their homes and farms were destroyed or abandoned; but they always came back.

One pause in the fighting followed a major meeting of Native Americans and British at Casco (Portland) in 1702. Mitchell listed three Kennebec chiefs named Bomaseen, Captain Sam and Moxus among those present.

Bomaseen or Bomazeen appears in multiple histories, identified as a Norridgewock chief, shot by the British in 1724. Captain Samuel, whose real name is given on line as Wedaranaquin, was a Kennebec or Norridgewock leader, born before 1680 and maybe died in 1722; he is described as “an orator” at the 1702 Casco conference. Moxus was, or might have been, Bomaseen’s son, born before 1660 and died about 1721, according to other on-line sources; one says he was a Penobscot leader and by 1701 leader of the Norridgewock group.

A European peace in 1713 meant an interval of peace in the Kennebec Valley and the rest of Maine, during which more settlers moved in, basing their land claims on “deeds” given them by natives who had not yet learned concepts of individual ownership.

A 1717 British attack on Norridgewock, by then home to Father Sebastien Rale, who was highly esteemed by the Kennebecs, brought open warfare again, Mitchell wrote.

In August 1724, the British succeeded in killing Rale, and on their way to Norridgewock, Bomaseen. Rale’s death ended the Kennebecs’ participation in wars against British settlers, Mitchell said. He described subsequent “minor conflicts” in the Kennebec Valley as “of little importance,” though people continued to die for another three decades.

In the spring of 1754, the Massachusetts General Court ordered a new fort on the point between the Sebasticook and the Kennebec at Ticonic to deter the French and protect the British settlers. Major General John Winslow and soldiers, Governor William Shirley and other authorities met with local chiefs late in June and told them the plan.

Williamson wrote in his history of Maine that the chiefs were opposed, until the Massachusetts delegation showed them documents by which their forebears had ceded the land. They then signed a treaty and celebrated with a dance before all, except three young men, went back to their villages.

Two days later a group of Penobscots met with the Massachusetts delegation to sign the treaty. Two of their young men also stayed behind, and, Williamson wrote, “the five were sent to Boston to be educated.” He said nothing more about them.

The British soldiers then built Fort Halifax. It was finished Sept. 3, 1754, and the Governor, who had been visiting Falmouth and surrounding towns, came upriver for an inspection. Mitchell said that the governor “very highly complimented General Winslow and his men.”

The inspection must have been hurried, however, because Williamson wrote that Shirley continued upriver from Ticonic as far as Norridgewock and was back in Boston Sept. 9.

The Massachusetts General Court promptly authorized funds to supply the fort and buy gifts for the Kennebecs, Williamson said. The gifts were recalled, because on Nov. 6, 1754, the Fort Halifax garrison sent Governor Shirley the news that Native Americans had attacked a party of soldiers outside the fort, killing one and taking four prisoners.

Williamson did not suggest what reason the Natives Americans might have had. From the British point of view, his words were “outrage” and “base and cruel treachery.” He added that efforts to ransom the prisoners were counterproductive, because they encouraged more kidnapping to collect more ransoms.

The Nov. 6 attack marked the beginning of the French and Indian War, the last of the long series. Tribal warriors attacked throughout the Kennebec Valley. Williamson mentioned one man (probably a soldier, though he did not specify) shot at Ticonic in 1755 and another “taken” on his way north to Fort Halifax.

The Kennebecs saw Fort Halifax as “an object of great affront and hatred,” Williamson wrote. In 1756, they shot and killed two soldiers “catching fish at the falls.”

Mitchell agreed, recording that “No man was safe if he ventured beyond the limits of the fortifications. Several were mortally wounded by the Indians.” The last attack, he wrote, was on May 18, 1757.

Captain Lithgow, in charge of Fort Halifax, had noticed rafts floating down the Kennebec, deduced that warriors had crossed and were making their way downstream by land and sent ten soldiers downriver to warn settlers. As the men came back, they were ambushed near Riverside. They resisted so effectively that the Kennebecs fled.

The cost was two soldiers wounded, one Kennebec killed and one wounded, Mitchell said. And, he concluded, the “skirmish” at Riverside was “the final shot of the redman, as a tribe, in this region.”

Settlers continued to use the name Ticonic, misplaced, for the west side of the Kennebec River after Winslow was created as a town (including present-day Waterville) in 1771. After Waterville became a separate town on June 23, 1802, Kingsbury wrote that Asa Redington, convening the first Waterville town meeting, called on voters to assemble “in the public meeting house in Ticonic village on Monday, July26, 1802.”

The name Ticonic endures today, as in Waterville’s Ticonic Street and Ticonic Bridge (scheduled for replacement by 2026).

Next week: another major Native America village, at Cushnoc, and more incomplete evidence from elsewhere in the central Kennebec Valley.