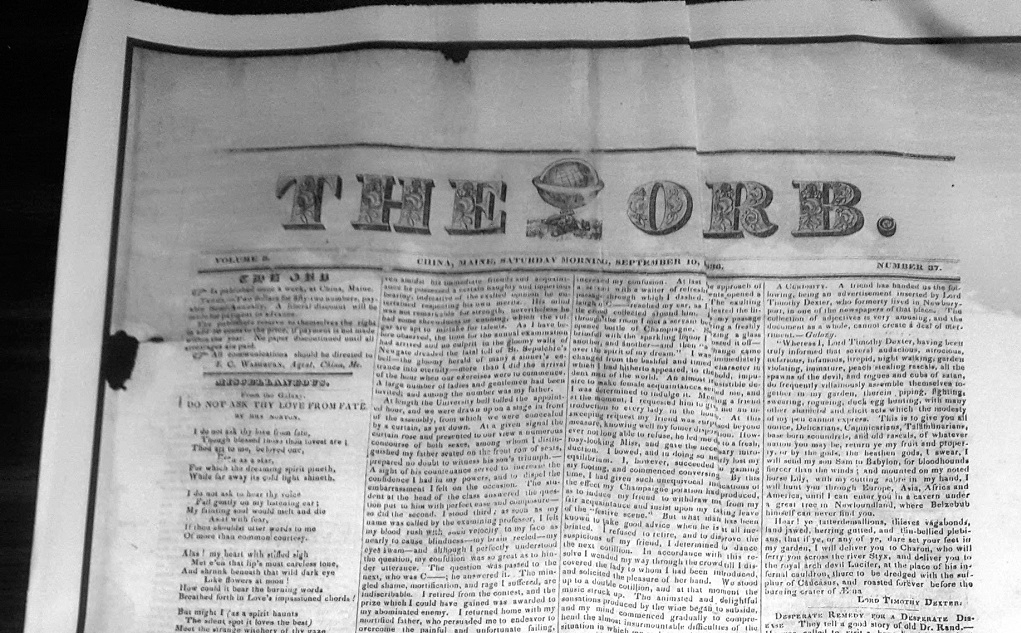 Reproduction of The Orb from 1836.

Several of the small towns in the central Kennebec Valley have had local newspapers, and one – China – still does as of 2020. This writer has found no record of a newspaper published in Sidney, Winslow, Benton, Palermo or Windsor.

Vassalboro’s first local paper was The Clarion, which Dean Marriner calls “one of the most unusual newspapers ever printed in Maine or anywhere else.” The first edition was published in March 1886 by S. A. and N. C. Burleigh. S. A. was 15-year-old Samuel A. Burleigh, later owner and editor of the Sentinel in Waterville; N. C. was his eleven-year-old sister Nettie.

The first issue, Marriner wrote, was only four small (six inches by five-and-a-half inches) pages. It contained the publishers’ statement of purpose (“dissemination of truth and temperance” and “advancement of scientific and practical knowledge”) and advertisements from a dressmaker in North Fairfield (Hall Burleigh, Samuel and Nettie’s father, was a Fairfield native), a farm in Vassalboro and a Vassalboro woman selling a Davis Machine (Davis was a leading brand of sewing machine in the 1880s). Marriner added that ads cost 10 cents an inch, 45 cents a column or 85 cents for a whole page. An annual subscription was 20 cents.

By 1888, Marriner continued, the Burleighs’ monthly paper had four eight-by-10-inch pages, a circulation of more than 1,000 and ads from as far away as Belgrade. The annual subscription price was 30 cents, and the publishers were seeking local correspondents in Vassalboro, China, Winslow and Sidney. Recompense would be a free subscription, and the publishers would supply writing materials and pay postage.

When Samuel Burleigh entered Colby in the fall of 1881, the Clarion went out of business. Marriner wrote that Burleigh replaced it in September 1881 with a four-page non-partisan weekly named the Valley News, published by the Kennebec Valley News Company. The publisher was also the editor. Subscriptions were 50 cents a year. Numerous advertisers from Waterville helped support the paper, whose closing date is not listed in any source this writer found.

The Library of Congress (LOC) on-line newspaper directory lists a weekly Kennebec Valley News with the same Vassalboro-based publisher. It appears to be yet another paper, because the LOC has a copy of Vol. 1, No. 32, that is dated April 5, 1892.

The LOC also lists a monthly publication from Vassalboro named The Young America that first appeared in 1877. This writer failed to find any additional information.

Whittemore wrote in his history of Waterville that in 1898 the W. M. Ladd Company, whose owners bought the Waterville Sentinel’s printing equipment, began printing three weeklies from surrounding towns, the Vassalboro Times, the Clinton Herald and the China Tribune. This writer has found no other reference to any of those newspapers.

Fairfield has had two local weeklies, according to the bicentennial history, and Howard Owen, author of the newspaper chapter in Kingsbury’s Kennebec County history, added a third. According to Owen, before Benjamin Bunker started the Kennebec Democrat, in Waterville, in February 1887, he published the Pine Tree State in Fairfield for two years starting in 1880, and owned the Fairfield Journal (see below) until 1886.

Joseph Griffin’s 1872 publication, The Press of Maine, found online, has a paragraph about the Chronicle, which he called the Fairfield Weekly Chronicle. Griffin dated the first issue May 1, 1872. The four-page, eight-column paper was what the trade called a “patent outside”; Griffin explained that the outside pages, one and four, came preprinted from Boston or New York and editor Colby composed and printed the local news and ads that filled pages two and three. An annual subscription was $2.50, Griffin wrote.

The Chronicle was succeeded by the Fairfield Journal, beginning July 2, 1879, and ending, according to the LOC listing, with Volume 52, No. 28, July 9, 1925. The LOC gives the publisher as Augustine Simmons. The Fairfield history includes an excerpt from the Dec. 17, 1901, issue describing the flood the day before.

Judge Augustine Simmons rates three pages in Sprague’s Maine history journal (found online), with his Fairfield newspaper experience covered in a single sentence. Elmer Sawyer wrote that Simmons was born Feb. 20, 1849, in Topsham; the family moved to Brunswick when he was three and he always called Brunswick home, though he lived elsewhere.

Simmons entered Bowdoin in 1867, but withdrew for lack of money after two years; he graduated in 1881, counted as a member of the Class of 1871. During his enforced break he taught, mostly at Anson Academy in North Anson. He also studied law with E. W. and F. E. McFadden in Fairfield and became a member of the Kennebec bar on Aug. 7, 1877. After that he edited the “Fairfield Journal “for less than a year (perhaps its first editor?) before going back to teaching and then practicing law in North New Portland over the 1880-81 winter and in North Anson from May 1881 to Oct. 24, 1917.

Simmons has the title “Judge” because he was Somerset County Judge of Probate from 1904 to 1912.

The LOC lists one 20th century Fairfield weekly newspaper, the Fairfield Free Press. The first issue appeared Nov.3, 1938; Ivers L. Greenleaf is named as publisher. This writer has found no other information.

The Clinton Advertiser was the first – and only? Owen says so, but see the Clinton Herald reference above – Clinton local paper. According to the LOC, from Oct. 14, 1886, to sometime around 1894 it was a weekly; it was published until at least July 29, 1909 (when the volume was number 32). The University of Maine’s Fogler Library index, however, says the Advertiser began publication in 1879 and closed in 1907.

Owen wrote that as of 1892, the paper was the smallest in Kennebec County. It was founded in June 1886, edited and published by B. T. Foster & Company. An annual subscription cost 50 cents. A Clinton history web site says Clinton’s Brown Memorial Library has bound copies of the Advertiser.

In Albion, Ruby Crosby Wiggin found a copy of the Albion Courier dated Oct. 7, 1878. The front page said the paper was a semi-monthly published by Bert Foster. The subscription fee was listed as 50 cents (annually?) or for six months 25 cents, payable in advance. Foster declared the paper was apolitical, non-sectarian and interested in local news, including accounts from neighboring towns.

Wiggin’s history has no other information about the Albion Courier. This writer found no other references.

China’s 19th-century newspaper was The Orb, published every Saturday by “an association of gentlemen” (quoted by Marriner from its initial issue) headed by China Village resident Japheth C. Washburn. The first two volumes of The Orb started with the issues of Dec. 5, 1833, and Dec. 6, 1834, respectively. The China bicentennial history says in the fall of 1835 Washburn organized a meeting to consider whether to discontinue publication and got enough local support to continue the paper until November 1836.

The paper’s goal was to be “interesting, useful and pleasing.” It covered agricultural and other local occupations; temperance; and religious, literary and political news.

A lengthy description in the China history says the paper had four pages, each with four or five columns of small type. The only illustrations were in ads. Readers found a mix of fiction and non-fiction: Washburn’s editorials were on page two, news (from the town, the state, the nation and the world) usually on pages two and three, ads mostly on pages three and four, frequently a poem and a moral or religious essay on page four, jokes throughout as fillers.

The Orb supported President Andrew Jackson and his party; the Dec. 13, 1834, issue contained the text of Jackson’s December 1 address to Congress. Washburn had no use for the opposing Whig party and frequently referred to them as Wigs, Marriner wrote. In 1836, the China history says, The Orb reported on the state and national Democratic conventions. The paper presented selective detailed information on state legislative sessions and Congressional activities, sometimes even quoting or summarizing debates.

Local items included births and deaths, meeting notices, and reports on fires, crimes and similar events. The China history comments that one unusual item, appearing intermittently, was “the list of addressees of unclaimed letters at the China post office.”

An annual subscription to The Orb was $2 discounted if paid during the first three months. Washburn reported 300 unpaid subscriptions at the beginning of the second year,perhaps one reason the paper had a short life. Owen adds another explanation: the lack of advertisers and of other jobs for Washburn’s printing press in an agricultural town. [Editor’s note: Reproductions of The Orb, Vol. 3, No. 37, dated September 10, 1836, are available at The Town Line’ s office.]

The Town Line only weekly newspaper in central Maine THE MONEY MINUTE: Cryptocurrencies are here to stay
Scroll to top