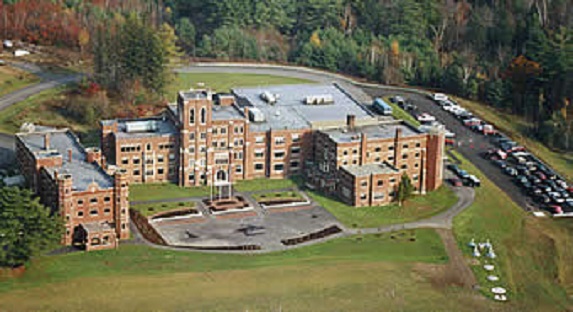 We now digress – for a change – from descriptions of churches on the National Register of Historic Places to the Oak Grove School, because of its association with the Sophia D. Bailey Chapel discussed last week (and also known as the Oak Grove Chapel).

According to Raymond Manson and Elsia Holway Burleigh, whose history of the school was often cited last week, the Vassalboro and Fairfield Friends started Oak Grove School in February 1848. The authors provided a detailed description, with dialogue, of the crucial meeting.

They said wealthy mill-owner John D. Lang (1799-1879), of Vassalboro, hosted fellow residents Ebenezer Frye and Alton Page, Samuel Taylor, from North Fairfield, and Alden Sampson, from what is now Manchester. The men agreed to pay Lang’s son-in-law, Charles Osborne, $50 for about an acre of land.

Alma Pierce Robbins, in her Vassalboro history, said the year was 1840 and listed the men who bought land from Charles Osborn (without a final e) as Frye, Lang, Pope and Elder Sampson, all from Vassalboro, plus Taylor, from Fairfield.

Rufus Jones’ chapter on the Society of Friends in Kingsbury’s Kennebec County history listed the founders as Frye and Lang, from Vassalboro, Taylor, from Fairfield, and from Manchester Alden Sampson and Alton Pope; Jones dated their effort from “about 1850.”

The original school at left, and a three-story student boarding house.

The site of the school, as Jones described it, included a grove of oak trees on top of a hill – hence the name. From the hilltop, one could see down the Kennebec River to Augusta and beyond. Across the river, Mt. Adams and Mt. Washington rose above the lesser mountains of western Maine.

In addition to the view being a “constantly inspiring influence,” Jones wrote, the new school would be adjacent to the Friends Meeting House, and close to the wealthy men who each pledged $1,000 to start it.

Manson and Burleigh wrote that Frye was in charge of construction. He oversaw spending $2,500 for a 40-by-60-foot three-story wooden building on the hilltop above the Friends burying ground. The school’s first 16-week term began in December 1850, with William H. Hobby as the first principal.

The Manson and Burleigh history has a sketch of the building, surrounded by trees, with a steep roof topped by what looks like an eight-sided windowed cupola. A flight of at least a dozen steps runs all the way across the 40-foot end, leading to the front wall with a door at either end and a window between (the same pattern as China’s Pond Meeting House; see the photo in the July 8 issue of The Town Line).

Originally meant only for the children of Quaker families, Oak Grove School quickly allowed all students to attend. Nonetheless, it did not attract enough to cover costs – because there were too few nearby homes where students could board, Manson and Burleigh said – and Oak Grove School closed in 1856.

Immediately, another group of Friends led by Eli Jones, from China, began working to re-open the school. They raised $15,000 from Friends all over Maine, got a new legislative charter in April 1857 for Oak Grove Seminary, bought another acre of land on the south side of the road and built a three-story student boarding house and opened the new school in December 1857, with Eli Jones serving as principal for the first year because the oversight committee could not agree on anyone else.

From 1873, the year the Maine legislature required towns to provide high schools, until July 31, 1918, Oak Grove officials usually contracted with the town to be its high school. In 1873, Kingsbury wrote, Vassalboro appropriated $500 for a high school at East Vassalboro, but because of Oak Grove Seminary did not need to spend it.

In the fall of 1862 a gymnasium was added near the boarding house. The school building burned down in 1880; classes were moved to the boarding house until a new school was built beside it, across Oak Grove Road from the original, and dedicated Nov. 24, 1885.

An arsonist burned down the school building and the boarding house on Aug. 31, 1887. The 14-year-old nephew of Principal Charles H. Jones died when he went back to retrieve a watch his father had just given him.

Principal Jones promptly oversaw conversion of the gymnasium into makeshift classrooms. On Sept. 18, 1887, that building was also torched.

Manson and Burleigh described how the arsonist, a 15-year-old boarding student, was traced, arrested, tried and convicted. His motives: he was not allowed to take the courses he wanted and he didn’t like the Oak Grove food or the Town of Vassalboro.

A new and larger school building was dedicated Sept. 5, 1888, including classrooms and laboratories, offices, a library, a kitchen and dining room and housing for students and for the principal. Manson and Burleigh specifically mention the central heating and the “bathrooms with hot and cold running water.”

Photos show an enormous wooden building in several interlocking sections. Much of it was three stories high on top of a full basement with large windows (one photo shows three stories throughout, another looks as though one section had two full stories plus a windowed attic above the basement rooms). A new gymnasium was built nearby.

Charles M. Bailey, of Win­throp, paid for the construction; money raised by Quakers throughout Maine became an endowment fund. The building was named Bailey Hall, and in 1888 the school became Oak Grove Seminary and Bailey Institute.

Oak Grove Seminary seems to have prospered until World War I, under the ownership of the New England Yearly Meeting of Friends. It ac­quired additional land and more buildings – a power plant in 1906, a new gymnasium in 1908 after the one built in 1888 collapsed under its snow-weighted roof on March 17, 1907.

Enrollment declined beginning in 1914. Manson and Burleigh blamed the war, and also quoted from a 1915 report by the State of Maine Supe­rintendent of Schools saying more students were opting for public high schools.

In the winter of 1917 the school’s “board of managers” (Manson and Burleigh’s undefined terminology) voted to “lay down” (close) the school, apparently without consulting staff. Staff persuaded them to reconsider until they explored options. 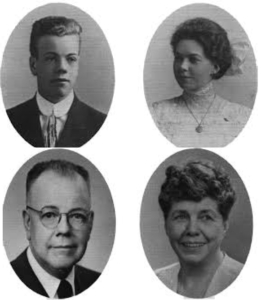 Top, Robert Everett Owen and Eva Pratt Owen when they took over the school while in their 20s, and, above, in later years.

One option was new management. In 1918, Manson and Burleigh wrote, the Board of Trustees hired Robert Everett Owen and Eva (Pratt) Owen, who became joint principals and served until 1968.

Aware of the school’s history, one of the Owens’ many achievements was building the fire-proof brick buildings that form what is now often called “the castle.” When the central building was finished in 1941, the school’s trustees voted to recognize their long-time principals by naming it Owen Hall. The Owens were pleased, but asked the trustees not to publicize the decision, and the new building was called the Administration Building.

On June 7, 1975, after both Owens had died, the trustees of what was by then Oak Grove-Coburn School held a ceremony in Bailey Chapel to publicly rename the building Owen Hall. As part of the observance, Betsy Palmer Eldridge, O.G. ’55, wrote a summary of the Owens’ lives and service.

The Owens were in their twenties when they took over management of the declining school. They had both graduated from Oak Grove, where they met, in 1910 and gone to Colby College, in Waterville. Robert graduated from Colby in 1914 and later got a master’s degree in education from Harvard.

Eva had to leave college to save her failing eyesight. She held brief principals’ jobs at South Thomaston High School and at Erskine Academy, in South China, before she and Robert were married in the summer of 1914.

Eldridge wrote that they spent the next four years at Erskine, Robert as the principal and Eva as the girls’ dean, before they came to Oak Grove in 1918. They promptly began sprucing up Bailey Hall and soliciting students.

In 1925, the Board of the New England Yearly Meeting of Friends accepted an education committee’s recommendation that Oak Grove become a girls’ school (and Moses Brown School in Rhode Island become a boys’ school). The goal was to make them specialized schools, distinguished from the co-ed public high schools that were increasingly numerous.

The Owens supported the change, Eldridge wrote. They reported at the end of the first year that enrollment was larger than expected, and “the girls are high-minded and wholesome, and it has been a joy to work with them. They are more contented and doing finer school work than the girls did during the seven years of co-education.”

The Owens’ building project began in 1928 with the dormitory named Briggs Hall (Eldridge gave no explanation for the name). It was followed by the 1938-39 Recitation Building, connected to the east end of the dormitory by a small arcade.

The Administration Building and a second dormitory, later called Senior House, were added in 1940-41, connected by a second, longer arcade students called “the tunnel.” These new buildings provided enough space so that the 1888 Bailey Hall could be demolished in 1942.

Smaller additions were made on the grounds in the 1950s. One was a new cinder-block barn; Eva Owen had always supported the Oak Grove riding program, which she herself taught for some years.

In 1962, Eldridge wrote, the Science Building “completed the Quadrangle by filling in the gap between the Administration Building and Senior House.”

A gymnasium and auditorium were also added in 1962. Eldridge summarized that over 50 years, the Owens had developed Oak Grove from “three buildings on twenty-eight acres to eleven buildings on more than five hundred acres of woods, ponds, lawns and gardens.”

Eldridge called the financing of so many buildings “a mystery” and attributed it primarily to Eva Owens’ enthusiastic sharing of school life with parents, alumnae and others interested. She was famous for writing long friendly letters that did not ask for money, but motivated people to donate anyway.

After their retirement, the Owens continued to live in their apartment in the Administration Building, Eldridge wrote. Robert Owen died July 11, 1973; his wife died Sept. 20, 1974. Both are buried in Green Lawn Rest Cemetery, in Clinton, her home town.

The last sentence of Manson and Briggs’ 1965 history reads, “There will never again be a question of the ‘laying down’ of the [Oak Grove] school.”

However, as mentioned last week, the Owens lived to see the 1970 merger of Oak Grove School with Coburn Classical Institute, a co-ed high school in Waterville, with a history going back to the 1820s. Oak Grove-Coburn School in turn closed in 1989, and the state bought the Owens’ buildings and now uses them as the Maine Criminal Justice Academy.