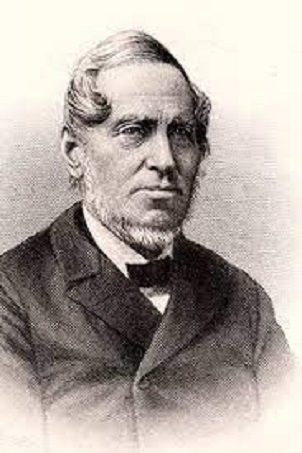 Writer’s note: Samuel Francis Smith is mentioned in enough local histories that writing a few paragraphs about him seemed obligatory, even though his connection with the central Kennebec Valley was brief.

Samuel Francis Smith (Oct. 21, 1808 – Nov. 16, 1895) is best known as the man who in 1831 wrote America, also called My Country ‘Tis of Thee. The song was one of the United States’ unofficial national anthems, especially popular during the Civil War as “a rallying hymn for the north” (Earl Smith’s words, in his history of Colby College).

The chapter in Whittemore’s 1902 Waterville centennial history on churches and ministers, written by George Dana Boardman Pepper (who was one of the ministers) says Smith was born and died in Boston. Educated at Boston Latin School and Harvard (Class of 1829), he graduated from Andover Theological Seminary in 1834.

It was while a student at Andover that Smith wrote America. In different articles that do not precisely match, Wikipedia says:

— Composer and musician Lowell Mason (Jan. 8, 1792 – Aug. 11, 1872) asked Smith to translate or to write American words for some German songs, which included the tune to which America is set.
— Smith wrote the words spontaneously and gave them to Mason to set to music, and Mason chose the German tune.

Earl Smith’s history gives this version: Samuel Smith did translations for Mason, who asked him to find “something striking” for a July 4 observance. Smith took a German song called God Bless our Native Land, and “in one afternoon” wrote the English words and called his song America.

Mason was an organist, a choir director and a composer of church and school music. Wikipedia’s biography credits him with several well-known songs, including Mary Had a Little Lamb, but does not mention America.

The Wikipedia article on Smith says the song was first sung publicly “on July 4, 1831, at a children’s Independence Day celebration, at Park Street Church, in Boston,” where Mason was organist and led the choir. Mason published it in 1832.

After a year (or less) as an editor of the Baptist Missionary Magazine in Boston, Smith came to Waterville in 1834 as pastor at Waterville Baptist Church and modern languages professor at Waterville College. His pay as a beginning professor was $100 a year, Earl Smith wrote.

Pepper called Smith’s arrival on Jan. 1, 1834, “the beginning of a new era” for the church and the town. He and Wikipedia agree that Smith was ordained a Baptist minister in Waterville, on Feb. 12, 1834. (These dates, if accurate, mean Smith probably came to Waterville before graduating from Andover, and they seem to contradict sources saying he spent at least part of a year in Boston.)

Pepper quoted from Smith’s own account of his Waterville years, describing the character and the growth of his congregation, and commented that it was not surprising that church members and townspeople “have ever given him a large place in their affections.”

Although officially Waterville First Baptist’s pastor, Smith preached in other churches, including the first chapel at Ten Lots, in western Fairfield (see last week’s issue of The Town Line). Dean Marriner mentioned in Kennebec Yesterdays the time Messalonskee Stream flooded and kept him from returning from Ten Lots for his evening service in Waterville.

The history of Fairfield includes quotations from an 1896 “biographical sketch” by Martha Sturtevant Coolidge, identified as the granddaughter of Ten Lots settler Lee Sturtevant. Coolidge wrote that when she was in school, the members of the “school visiting committee” were always local ministers and lawyers.

She continued, “It was my good fortune during a part of my school days, that Dr. S. F. Smith, the well known author of America [,] was on the visiting school board. He seemed to bring the very sunshine with him, he had such a bright happy way in greeting us.”

In 1839, Marriner wrote in his Colby College history, what was then Waterville College was so short of funds that the president and one of the four faculty members quit. Another faculty member, George Washington Keely (Mathematics and Natural Philosophy) persuaded two more, including Smith, to stay on. Marriner pointed out that since Smith’s position was secondary to his preaching job, he had no compelling reason to desert the college.

The college trustees let Keely try to raise money, Marriner wrote. They did not appoint a new president in 1840, because they knew they couldn’t pay him.

Keely, with help from long-time college supporters, and from his two colleagues – all three donated half a year’s salary to the fund drive, despite years of back pay the college owed them, and went scrounging for money between terms – raised more than $50,000, enough to keep the school open.

After the crisis was over (temporarily), Smith’s annual salary as a part-time professor was $275, Marriner wrote. Smith left the church and the college in 1841.

When what was by then Colby College moved to the Mayflower Hill campus in the past century, historian Smith wrote that one of the many mementos from the old campus that came to the new one was a “tablet” honoring Reverend Samuel Smith that was hung on a wall in Lorimer Chapel.

After Smith left Waterville, Wikipedia says, he moved to Newton, Massachusetts, for the rest of his life. He continued to write song lyrics; he served as pastor of the First Baptist Church, in Newton Center; and he worked for the Baptist Missionary Union, editing its publications and later becoming its editorial secretary, a position he held for 15 years. His history of Newton was published in 1880.

Smith died Nov. 16, 1895, on his way to preach in Readville, a Boston suburb. Wikipedia says he left a wife and five children. His gravestone in the Newton Cemetery conspicuously identifies him as author of My Country ‘Tis of Thee.

In addition to the Colby memorial plaque, other reminders include his former home in Andover, “now a Philips Academy dormitory named America House.” Efforts to preserve his Newton home were thwarted by damaging fires in 1968 and 1969, but a monument and garden mark the site.

An on-line article from the Library of Congress says Smith was not the first to use the British melody for an American patriotic song. It quotes two stanzas sung at President George Washington’s first inauguration in 1789:

Hail, thou auspicious day!
For let America
Thy praise resound.
Joy to our native land!
Let every heart expand,
For Washington’s at hand,
With glory crowned.

Thrice beloved Columbia, hail!
Behold before the gale
Your chief advance.
The matchless Hero’s neigh;
Applaud him to the sky,
Who gave you liberty,
With gen’rous France.

(“Hero’s neigh” does not refer to a talkative horse; “neigh” is apparently an obsolete spelling of “nigh,” meaning near. Washington’s favorite warhorses were named Blueskin and Nelson. They were retired to Mount Vernon after the war ended.)

The first four verses of the current song were Smith’s original composition. There was a fifth verse in the original; Earl Smith wrote that its author deleted it because “it was sharply anti-British.” Earl Smith quotes it:

Samuel Smith added a new fifth verse for the April 30, 1889, New York City celebration of the centennial of Washington’s first inauguration. That verse is as follows:

Our joyful hearts today,
Their grateful tribute pay,
Happy and free,
After our toils and fears,
After our blood and tears,
Strong with our hundred years,
O God, to Thee!

The familiar version of “America” has four verses:

My country, ’tis of thee,
Sweet land of liberty,
Of thee I sing;
Land where my fathers died,
Land of the pilgrims’ pride,
From ev’ry mountainside
Let freedom ring!

My native country, thee,
Land of the noble free,
Thy name I love;
I love thy rocks and rills,
Thy woods and templed hills;
My heart with rapture thrills,
Like that above.

Our fathers’ God to Thee,
Author of liberty,
To Thee we sing.
Long may our land be bright,
With freedom’s holy light,
Protect us by Thy might,
Great God our King!

Wikipedia’s long history of God Save the King (currently God Save the Queen) emphasizes its age and uncertain origin. The article says it is the unofficial anthem of the United Kingdom and many Commonwealth and other British-related countries and territories; there is no official British national anthem.

An on-line article from the Library of Congress says “God Save the King” became popular in London in September 1745, as support for King George II.

The words, too, vary, not only depending on whether the monarch is a king or a queen. The first verse is almost always the same, but, Wikipedia says, “Since its first publication, different verses have been added and taken away and, even today, different publications include various selections of verses in various order.”

The standard version of the first verse in 2021 is as follows:

Three of the 10 longest-reigning British monarchs have been women, according to an on-line list from The History Press. The current Queen, Elizabeth II, is at the top of the list; she ascended the throne Feb. 6, 1952, and was formally crowned at Westminster Abbey on June 2, 1953. This writer calculates she has reigned for 68 years and more than two months, so far.