Two national military leaders in the War of 1812, Brigadier General John Chandler and Brigadier General Eleazer (or Eleazar – sources differ) Wheelock Ripley, were from Maine, according to Louis Hatch’s state history. Both had connections with the central Kennebec Valley: Chandler lived most of his life in Monmouth, and Ripley practiced law in Waterville for a short time. 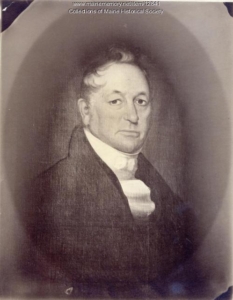 John Chandler (Feb. 1, 1762 – Sept. 25, 1841), born in Epping, New Hampshire, served in the Revolutionary War (see the Jan. 20 issue of The Town Line) and after the war settled in Monmouth, with a loan from General Henry Dearborn.

(Kingsbury says in his Kennebec County history that Monmouth was incorporated in 1792, named in honor of Dearborn’s “brilliant and daring conduct at the battle of Monmouth, N. J.” on June 28, 1778.)

Chandler was Monmouth’s first town clerk, in 1792; was elected selectman in 1792 and served two years; was elected again in 1795 and served nine years, according to Kingsbury. Wikipedia adds that he was in the Massachusetts Senate from 1803 to 1805, and in the United States House of Representatives from March 1805 to March 1809. He became Kennebec County sheriff in 1809.

On Feb. 27, 1812, Chandler “became major general of the Massachusetts Militia,” Wikipedia says. After President James Madison declared war on June 18, he appointed Chandler commander of the 17th Division, United States Volunteers. An on-line writer on a War of 1812 reenactment (the page is identified as the U. S. 23rd Infantry Regiment’s product) says he led them in a “disastrous thrust” into Canada.

In July 1812, Chandler resigned as a militia officer and was made a United States brigadier general, commanding one of three brigades of the army fighting in northern New York and southern Canada. Here, too, his success was limited.

A Canadian source describes the June 6, 1813, Battle of Stoney Creek, near Hamilton, Ontario (on the west end of Lake Ontario, northwest of Niagara Falls). A British force of about 700 men under Brigadier General John Vincent was retreating north, followed by Chandler’s army of more than 3,000 men, with artillery and cavalry.

Chandler went into camp at Stoney Creek on June 5. The outnumbered British expected his invasion to continue, costing them more territory; but two people saved them.

The first, according to the Canadian history, was a Lieutenant Fitzgibbon in Vincent’s army, who entered the American camp pretending to be a farmer selling butter and noted that troops were so spread out they would have problems coordinating if they were attacked.

The second person is identified as “Billy Green.” Green had a brother-in-law who had been captured and released by the Americans, and while with them had gotten their password from a “gullible U. S. soldier.”

Both pieces of information went to Vincent and persuaded him to attack the American camp. Starting around 11 at night, British troops led by Lieutenant-Colonel John Harvey (later Sir John Harvey) moved in, bayoneted American pickets and attacked the sleeping troops.

In the confusion, Chandler and Brigadier General William Winder from Maryland were captured – Wikipedia says, “when they wandered into the British line, thinking it was their own.” With no leaders and no idea how many troops the British had, the Americans headed back toward Fort George, on the Niagara River, where, the Canadian source says, they remained without further offensive action for the rest of the war.

Another on-line source says 23 British soldiers were killed in the battle, 136 were wounded and 55 went missing. On the American side, the figures were 17 men killed, 38 wounded and 99 missing. The surprise attack could have been disastrous for the Americans, this writer says, had not a few early shots given them a little warning and had the troops not been “sleeping in formation” (even if spread out).

Chandler was exchanged in 1814. Your writer has found no reference to where he was held or under what conditions. However, an on-line source summarizes the November 1812 agreement between Britain and the United States, which said, among other things:

After returning to the United States Army, Chandler spent the rest of the war on the Maine and New Hampshire coasts, Wikipedia says, “coordinating efforts between the local militia and federal units.” The writer of the reenactment piece mentioned above was not impressed by his actions on the coast, either, writing: “Considering that the British occupied about a third of Maine, it could be reasonably suggested that Chandler was unsuccessful here as well.”

Hatch, summing up Chandler’s military history, called him “a brave officer” who “did little to distinguish himself.”

After the war ended Chandler returned to politics, serving in the Massachusetts General Court in 1819 and the Maine Constitutional Convention in October 1819. He was the first president of the brand-new Maine Senate, serving from March 15 to June 19, 1820, when he resigned to take his seat as a United States Senator.

He served in the Senate until March 3, 1829. In the 18th, 19th and 20th Congresses, he chaired the committee on militia and, Wikipedia says, “played a key role in establishing the arsenal at Augusta, as well as the construction of the military road from Bangor to Houlton.”

Chandler retired from the Senate to become Collector of Customs, in Portland, until 1837. He was a Bowdoin College trustee from 1821 to 1838. He died in Augusta and is buried in Mount Pleasant Cemetery. 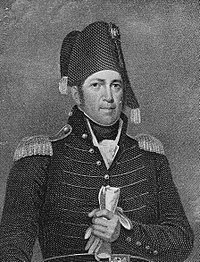 Wikipedia says Ripley’s grandfather, Eleazar Wheelock, founded Dartmouth, and his father, Sylvanus Ripley, was a professor there in the 1780s.

Ripley studied law under Timothy Boutelle, in Waterville, and opened his law practice there in the early 1800s. In 1809, Whittemore wrote in his history of the city, Ripley was one of Waterville’s first fire wardens. (Another was Elnathan Sherwin, mentioned last week.)

Ripley was elected to the Massachusetts General Court for two terms (sources differ on dates; one year was almost certainly 1811). One source says he was speaker in his second term, another that he became a senator; and he either resigned when the war broke out, or in 1812 moved to Portland and from there served as a Massachusetts senator.

In the War of 1812 Ripley organized and was made lieutenant colonel of the 21st United States Infantry Regiment, composed primarily of Massachusetts (including District of Maine) soldiers. The 21st fought in several major battles in upstate New York and adjacent Canada.

Hatch wrote that Ripley “won a national reputation” for himself and his brigade in the fighting at Lundy’s Lane and Fort Erie. Whittemore added that he took command of the American forces at Lundy’s Lane after Major General Jacob Brown was wounded.

By war’s end, Ripley was a major general.

“By a resolution of Congress dated November 3, 1814, Eleazar Ripley was presented a gold medal in honor of his military service,” the on-line encyclopedia says. Wikipedia adds that the medal “was the precursor to the Medal of Honor.”

Leaving the army in February 1820, Ripley returned to the law in Jackson, Louisiana, near Baton Rouge. Continuing his Maine pattern, he was elected to the Louisiana state senate and in 1834 to the United States Congress, where he served until his death.

The on-line encyclopedia writer adds that the Somerset County town of Ripley, Maine, is named after General Ripley, “though he never lived there.” Other sources add counties and towns in other states named after him, as well as Fort Ripley, a fort on the upper Mississippi River, in Minnesota.

Fort Ripley was first manned in April 1849, because a native tribe had been displaced to a nearby reservation and needed a government presence for protection and, an on-line site explains, to hand out annuity payments. After brief stints as Fort Marcy and Fort Gaines, in 1850 it was renamed again to honor Ripley.

The fort was active during the early 1860s, because of the Civil War and in local fighting as United States citizens continued moving into native American territory. After a January 1877 fire burned three buildings, the government abandoned the fort; by 1910, only the concrete powder magazine remained.

When the state of Minnesota bought land for a National Guard training area in 1929, the Fort Ripley site was included. The National Guard facility, in operation today, was therefore named Camp Ripley.