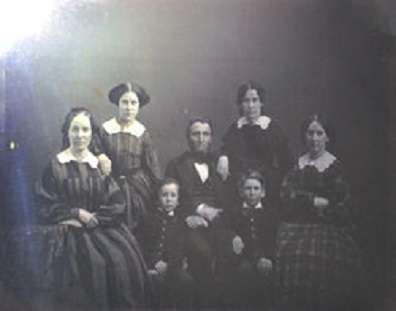 Reuben B. Dunn, center, and family.

Subpart one
– biographies one –

This article is planned as the first of a three-part subseries in which your writer introduces readers to some of the businessmen (and other people) mentioned in the previous weeks’ descriptions of Waterville’s Main Street Historic District, and sometimes to members of their families.

The arbitrarily-chosen subjects are arranged by birth order, oldest first. This week, please meet two men born early in the 1800s: Reuben B. Dunn, and several family members; and Dennis Milliken, with a bit about his son-in-law.

Reuben Barnes Dunn (Dec 23, 1802 – Sept 9, 1889) was the man after whom the R. B. Dunn Block at the south end of the east side of Main Street, mentioned in the Aug. 25 article, was named. Two sons, Willard Morse Dunn and Reuben Wesley Dunn, were also well-known Waterville residents.

Edwin Carey Whittemore’s Waterville history says Reuben B. was a country schoolteacher in 1820; a country storekeeper in 1821; a buyer and seller of timberland, lumber, clocks, threshing machines, hardware; a manufacturer of “scythes, axes and other agricultural tools” from 1841 until his death; railroad promoter in the 1840s and Maine Central Railroad president until he retired in 1870.

Reuben B. and Lydia moved from Poland to Readfield in 1841 and to Waterville in August 1850. Willard M. and Reuben W. were born in Fayette, the history says.

An on-line site says R. B. Dunn founded the Dunn Edge Tool Company in January 1840. It produced “scythe blades and edge tools.” Incorporated in 1856, it was sold in 1921 to Seymour Manufacturing Company; Seymour sold it two years later to North Wayne Tool Company. It closed in 1967.

By 1892, according to Reuben W. Dunn’s (perhaps self-interested?) chapter on Waterville manufacturing in Whittemore’s history, the Dunn Edge Tool Company’s scythe plant “is said to be the best and most conveniently arranged in America,” and the “axe shop is not excelled in convenience or efficiency by any of its size.” The company could produce annually 15,000 dozen scythes (180,000) and 6,000 dozen (72,000) axes, sold all over the United States and Canada. Reuben W. was the company’s “treasurer and manager”; his brother Willard was president.

The Dunn company was one of many early manufactories in the western part of Waterville, which became the separate town of West Waterville in February 1873 and was renamed Oakland in 1883. Manufacturers used water power from Messalonskee Stream, a smaller, more manageable source than the Kennebec River.

Whittemore suggested that Reuben B. Dunn and/or his sons were involved in other West Waterville businesses; and multiple sources credited them with bringing Amos Lockwood to Waterville to build the Lockwood Mill complex (see the Aug. 25 issue of The Town Line). Henry Kingsbury’s Kennebec County history identifies Dunn as the financier behind Mill Number 1 and the first president of the Lockwood Company.

Reuben B.’s older son, Willard Morse Dunn (May 11, 1845 – March 23, 1917), went to Maine Wesleyan Seminary, in Kents Hill, and started his business career in 1866 as a salesman in a Boston “cloth store.” In 1869 he moved to Auburn and joined a shoe manufacturing company. From 1873 he was active in organizing the Lockwood Company; he was still a company director in 1902, and was “interested in” other mills as well as president of Dunn Edge Tool Company.

Willard Dunn served as Waterville postmaster from 1879 to 1885 under Republican President Rutherford B. Hayes; he was replaced during Democrat Grover Cleveland’s first term and reappointed in 1889 by Republican Benjamin Harrison (this position was mentioned in the Sept. 29 history article).

Dunn was still postmaster in 1902. Redington called him “one of the most efficient postmasters the city has ever had,” and wrote that both he and assistant postmaster J. F. Larrabee were highly regarded by the residents they served.

Reuben B.’s younger son (Mabel Libby’s uncle), Reuben Wesley Dunn (Feb. 8, 1847 – Nov. 11, 1927), attended Maine Wesleyan Seminary (and became a trustee in 1877) and graduated from Colby University (as it was briefly titled) in 1868. He was teacher/principal at Corinth Academy for two years before going into business.

Like his father’s, Reuben W.’s business career was varied. An on-line site and Whittemore’s collaborators list: cotton mill agent in 1880; “visomess agent” (any reader who know what this title means, please contact The Town Line), 1870-1886; “in the department store business” with Lorin A. Presby, 1884-1891; “connected with the Lockwood Company” and other mills, including president of Madison Woolen Company from 1894 to1898; president of the Somerset Railroad, 1897-1907; treasurer and manager of Dunn Edge Tool Company after 1897.

Martha Baker Dunn was a novelist and a contributor to “leading literary magazines.” Her two novels are Memory Street: A Story of Life (1900) and ‘Lias’s Wife: An Island Story (1901); an on-line site adds a book titled Cicero in Maine: And Other Essays (1905).

Whoever described her in Whittemore’s book praised her “depth of insight, clearness in portraiture and true feeling, sometimes veiled in humor,” and wrote that readings of her unpublished stories were “a delightful feature” of the Women’s Association and Women’s Literary Club programs. 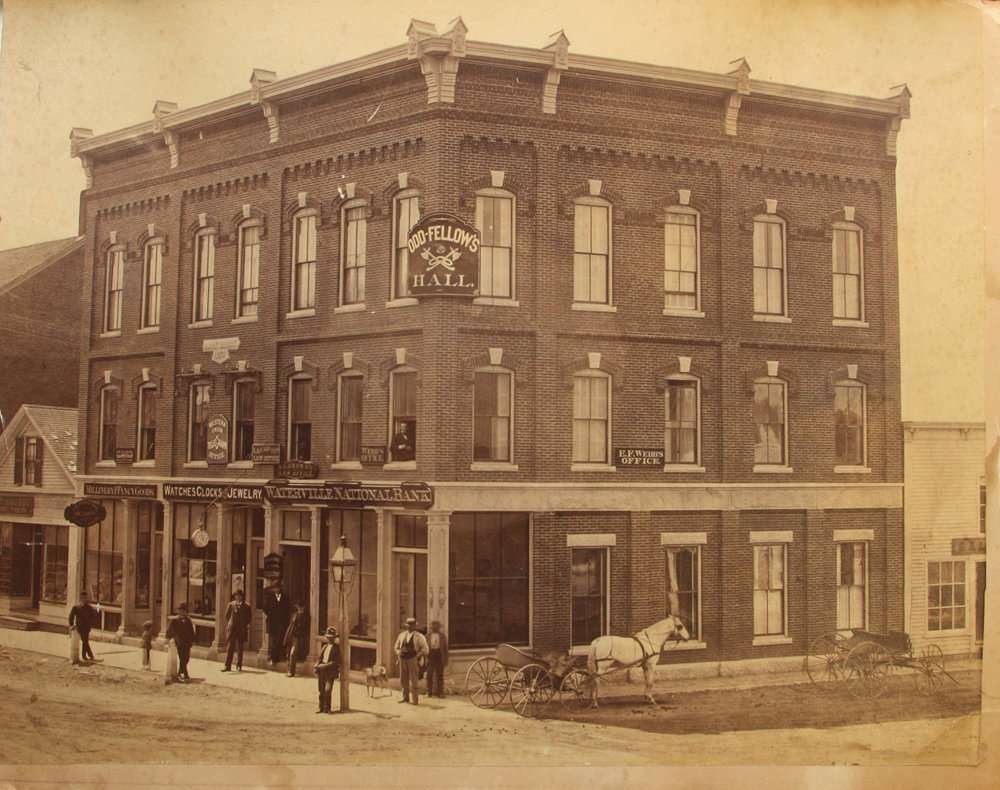 The Milliken Building, at the corner of Main and Silver streets, now occupied by the Silver Street Tavern.

Dennis Libby Milliken (Feb. 1 or 4, 1804 – Oct. 28 or Nov. 2, 1879) was identified in the Sept. 15 article in this series as the prominent banker in whose honor the 1877 Milliken Block on the south corner of Silver and Main streets was named. A Scarborough native, he married Jane Larrabee (born about 1804, and died after her husband) in that town on May 7, 1829. The couple had two sons and two daughters.

In 1830, at the age of 26, Milliken joined Jacob Southwick, of Vassalboro, in the lumber business. When the family moved to Waterville is unclear.

Whittemore’s history says Milliken served in the Maine House of Representatives and the Maine Senate, but does not say when, nor what town he represented. That information precedes the information that he was a member of the Governor’s Council under Democratic Governors John Fairfield (who served non-consecutive partial terms, 1839-1841 and 1842-March 1843) and Edward Kavanagh (Fairfield’s successor for the rest of 1843) and Republican Governor Lot M. Morrill (1858-1861).

In 1856, Milliken became president of Waterville National Bank, chartered in 1850 and first located in the second story of the north end of the Ticonic Block (Ticonic Row), described Sept. 15. He remained in charge, overseeing the building of the new brick bank that became the Milliken Block, until the bank closed in 1879.

Horatio Bates, who wrote the chapter on banking in Whittemore’s history, said Waterville National Bank “was well managed and paid good dividends.” When it closed, stockholders got the full value of their stock and a 20% dividend.

By the 1860s Milliken was prominent in Waterville affairs. Whittemore listed him among those chosen to address an April 20, 1861, public meeting called “to take action concerning the rebellion” in the southern states. He was a non-combatant in the Civil War; General Isaac Bangs listed him (and R. B. Dunn) among Waterville’s “prominent older men” who supported the Union cause whole-heartedly.

(Why the name Hadassah? No explanation. Her brothers were George and Edward; her sister was Mary; and her father is listed among organizers of Waterville’s first Unitarian Society in 1863.)

Bangs became Waterville National Bank’s cashier in 1861 and resigned in 1862 to join the army; he was on the bank’s board in 1879. In addition to banking, he was in the granite business and had interests in mills.

After the war, Milliken invested in building the first dam across the Kennebec and developing water-powered mills. His 1868 grist mill was one of the first two industries using the Lockwood Dam. His business career included an undated stint as president of the Androscoggin and Kennebec Railroad.

He served as a trustee of Waterville, later Colby, College from 1859 until his death.