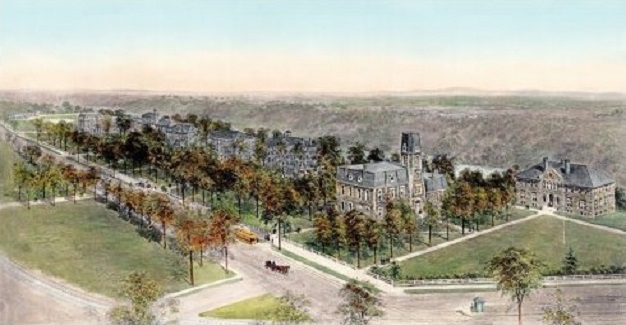 In Waterville, in addition to the private and public schools already described, there was Waterville Liberal Institute.

An on-line list of Universalists’ “higher institutions of learning” says Waterville Liberal Institute opened in 1835. It was the second such school in Maine; Westbrook Seminary opened in 1831 and ran until 1925, when the website says it became a non-sectarian school. These are the only two Maine Universalist high schools on the list.

Another on-line site has the Institute’s Feb. 28, 1835, legislative charter (and its 1851 catalog). Legislators said they were approving “an Institution for the purpose of instructing youth in the several branches usually taught in High Schools and Academies.” The charter listed the initial 10 trustees and said the board should in the future have at least seven and not more than 15 members. 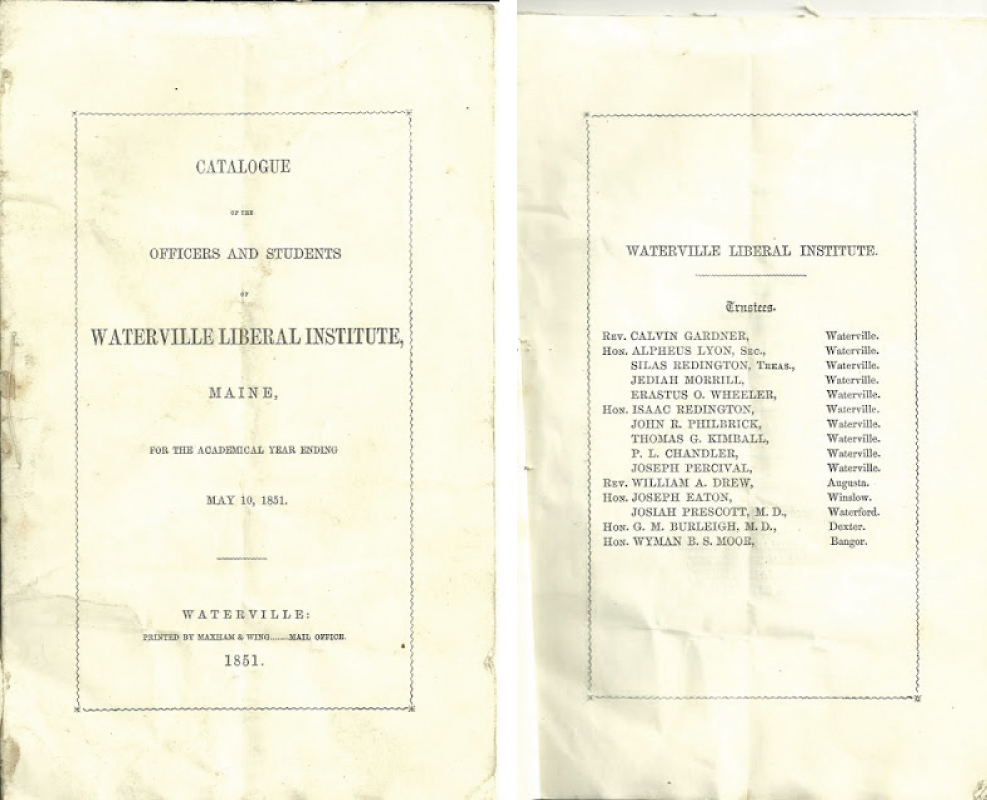 Ernest Marriner, in his history of Colby College, said that the Liberal Institute attracted so many students that there were too few left for Waterville Academy, established in 1829 as Colby’s preparatory high school and later Coburn Classical Institute (see The Town Line, July 29), so that the Academy closed from mid-1839 to the fall of 1841.

The 1851 Liberal Institute catalog lists the maximum 15 trustees. Ten were from Waterville, with one each from Augusta, Bangor, Dexter, Waterford and Winslow.

The Principal in 1851 was Rev. James P. Weston, A.M. Seven other faculty members were listed, although two apparently were job-sharing; Miss C. L. Fullam is listed as preceptress and Mrs. H. C. Henry as preceptress for the fall term.

That year there were of 174 students, 91 boys and 83 girls. The majority came from Waterville. Nearby towns that were represented included Albion, Canaan, Clinton, Fairfield, Gardiner, Readfield, Sidney, Skowhegan, Smithfield, Winslow.

Other students came from more distant Maine towns, including Bangor, Bingham, Calais, Cape Elizabeth, Dexter, Hiram, Plymouth and Waldoboro. One girl was from Holliston, Massachusetts. A boy and four girls, three of the girls named Hill and presumably sisters or otherwise related, came from St. Stephen, New Brunswick; another boy’s home was listed merely as Canada.

Not all the students attended all year. The spring term had the smallest enrollment, with 51 students. Only in the winter term did the woman outnumber the men, 41 to 38; in the popular fall term, the 112 students were evenly divided, 56 men and 56 women.

The catalog says the Institute was “situated in a convenient and retired part of the healthy and delightful village of Waterville.”

In 1851, the Institute’s leaders listed four goals: to give both men and women “a good English education”; “to prepare young men for College”; “to communicate a critical knowledge of the modern languages”; and “especially to qualify teachers for their calling.” The teachers’ classes were described as getting the Principal’s personal attention.

Facilities had been improved since the Institute opened 15 years earlier, including by making the “Female Department” permanent and providing “superior accommodations” for women.

Students could board with “good families” at prices that ranged from $1 to $1.75 a week for men and were a flat $1.00 a week for woman. Board included “room, washing, lodging, and lights.” (The difference between “room” and “lodgings” was not explained; the catalog explained that fewer “accommodations” lowered the price and advised that “clubbing” could make board very inexpensive.)

The school offered “Prep­aratory Studies,” a mélange of subjects featuring English language plus introductory mathematics, history and geography. This introduction was followed by three years – Junior, Middle and Senior – with four terms each year, during which the preparatory courses were extended and science and philosophy added.

The English department was considered central, and students were expected to take three years of English. Most courses were open to all. A few were considered not suitable for women and others were substituted; and apparently women seeking “a good Academic education” were expected to take courses in order, while men could drop in and out as their qualifications or schedules allowed.

Foreign language tuition was most expensive, at $5 a term. “High English” was $4 and “Common Studies” $3. Two extras were offered, music for $6 a term and drawing for only $1 a term.

Each day began with reading from the Scriptures, with all students expected to attend. The catalog said all students were also expected to go to the church of their family’s choice on Sundays.

Here is the paragraph on “Government” from the 1851 catalog:

“The Government of the school, though strict, is designed to be kind; and obedience is secured, if possible, by awakening the scholar to a sense of his moral obligations and by appeals to his better feelings. Those who cannot be induced by such means to correct their perverse habits and to submit to wholesome discipline, will be removed from the Institution as unworthy of its privileges and hurtful in their influence upon others.”

The previously-referenced list of Universalist high schools says the Institute closed in 1857.

In or about that same year, 1857, according to the Fairfield bicentennial history, a former public-school teacher named Naomi Bunker opened Bunker’s Seminary.

Bunker’s Seminary was a boarding school “in the old brick house on the corner of Newhall Street and Lawrence Avenue.” The main building had two wings, a gymnasium and the boarding house.

The history does not say whether the seminary was coed. It calls it a college preparatory school that offered music and painting in addition to academics, and that enrolled out-of-town students as well as local ones. No date is given for the closing of the seminary.

In the fall of 1939, a 24-year-old Universalist paster from New Hampshire, Rev. Giles Bailey, visited central Maine and became friends with James Partelow Weston, a Bowdoin College senior taking time off to teach “at a private school in South Montville” to earn money to return to college. Bailey was impressed enough with Weston to follow his career, and to write an essay on his accomplishments for the January 1869 issue of the Ladies’ Repository.

Bailey said Weston was born in the section of Bristol that later became Bremen, on July 14, 1815. On-line genealogies add that he was one of 11 children of Eliphas or Eliphaz and Elizabeth Betsey (Longfellow) Weston.

A farmer’s son, Weston grew up with little formal schooling, but in a community that valued education and supported a library. Bailey called him a devout Universalist who preferred teaching to the ministry, and said he started teaching when he was 16.

In 1832, Bailey continued, Weston entered Lincoln Academy, in Newcastle. In 1834 he switched to Maine Wesleyan Seminary (a Methodist school), in Kents Hill, to finish his college preparation. After two years at Waterville College, starting in August 1836, he transferred to Bowdoin, earning degrees in August 1840 and in 1843.

Bailey wrote that after Weston taught a fall term in 1840 in Readfield, he “took charge of” the Waterville Liberal Institute until April 1843, preaching his first sermons there. He also preached in West Waterville (later Oakland), Sidney and other nearby towns. He was ordained at the June 1842 session of the Maine Universalists’ Convention, in Augusta.

On April 15, 1843, Weston became Augusta’s Universalist pastor, Bailey wrote. He served there until May 1850, when he returned to Waterville Liberal Institute until the winter of 1853.

He next became head of Westbrook Seminary, which Bailey said he restored from near collapse. His work there “attracted the attention of the Trustees” of Lombard University, in Galesburg, Illinois, which also needed rescuing. He started work there Oct. 17, 1859, and was “formally inducted” as president on Jan. 11, 1860.

(Lombard University began life in 1851 as Illinois Liberal Institute. It became Lombard University in 1857 and operated until 1900. A series of 20th-century changes and mergers created what is now the Meadville Lombard Theological School, in Chicago, described as a “Unitarian Universalist Seminary.”)

Weston was still alive when Bailey finished his article, although he had almost died of smallpox in the winter of 1866. Bailey had high praise for his work to improve Lombard, and called him the “respected and honored President” of the school.

The genealogies say the Westons had two daughters, Caroline Eliza Weston, born in 1844, and Mary Emeline Weston Woodman, born in1849. Bailey wrote in 1869 that Mary Emeline was the only surviving child; he believed she had graduated from Lombard University.