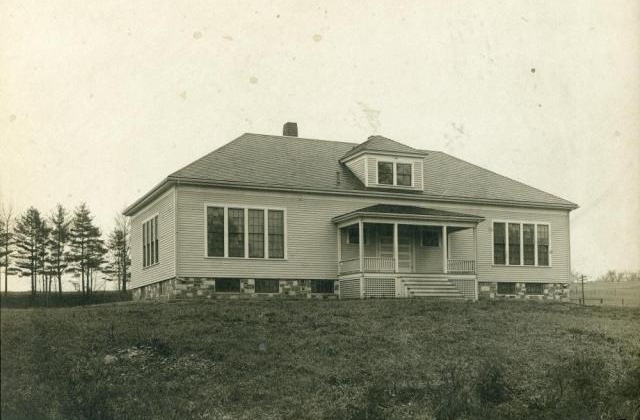 The second Fort School in Winslow was constructed on the east side of Lithgow Street during the summer of 1909 to replace the one-room original Fort School across from the church. The school had two very large rooms. In this image, the school is facing Lithgow Street. The school, the school lot, and land for a playground cost $4,500.00. It was part of the Winslow Public School system through 1937-38. In 1963, Waterville Window Company purchased the school and renovated it to serve their purposes.

Windsor residents are fortunate to have a well-researched town history by Linwood H. Lowden, published in 1993, that includes an equally well-researched chapter on schools by C. Arlene Barton Gilbert.

From this book, we learn that Windsor, like many other nearby towns, began funding primary schools early in the 1800s.

Windsor’s first teacher, and first resident preacher, was Rev. Job Chadwick, who had previously taught in China. In 1804, Lowden wrote, the Society for the Propagation of the Gospel sought a teacher for two small settlements, Hunts Meadow (later included in Whitefield) and Pinhook (in the southern part of what became Windsor).

The Wiscasset minister who recommended Chadwick explained that he had experience and a good reputation, and added, “Through a variety of misfortunes he has lately been stripped of all his worldly property, & I imagine would keep school at as easy a rate as any.”

Chadwick, once he met the residents of the two settlements, commented on the difference between the two jobs. Windsor residents, he wrote, “appear fond of the gift of a school if they might have it separate from the Gospel which they discover an uncommon aversion to…& treat it with entire neglect & a degree of contempt.”

Gilbert wrote that Chadwick’s first term of school was two month long, with an average attendance of 15 to 20 youngsters.

The earliest record of a Windsor town meeting that Lowden found was on April 3, 1809, at Chadwick’s house. Voters approved a $50 appropriation for education – and $700 “to be wrought upon the road or highways.” The latter was supplemented by approval of paying $1 a day for a man’s work on the roads and 66 cents a day for oxen.

A year later, voters approved five school districts and appropriated $150. Gilbert copied from the town records: “this money for schooling be paid in lumber and produce.”

Another year later, in April 1811, Gilbert wrote that the appropriation went up to $200, and voters started rearranging the districts. Later in the century, Windsor had at least 16 school districts, and possibly 18. When Henry Kingsbury finished his Kennebec County history in 1892, there were 12.

The first free high school of which Gilbert found a record started in 1867. According to Kingsbury, town officials bought “seats and desks” for the second floor of the town house to open the school, with Horace Colburn the teacher.

Gilbert wrote that after offering two high-school terms for each of five years, in March 1873 town meeting voters appropriated $200 to continue it, but rescinded the vote in April.

Nonetheless, she quoted from the 1877 school report that the prior year’s free high school terms, eight weeks in the spring and 10 weeks in the fall, were “very profitable to the district [District 1] and vicinity, giving the scholars who attended an opportunity for improvement that they could not otherwise have had.” The state subsidy amounted to $85.50, the report added.

The 1878 school supervisor’s report was equally enthusiastic. By then the free high school had 34 students, he wrote, “most of them being well advanced and quite a good number having had experience as teachers.”

Windsor’s free high school operated until 1902, Gilbert wrote. It was usually, but not always, in District 1. In 1902, there was a spring term, but the town was also paying tuition for students attending an out-of-town four-year high school (she did not say where the school was).

Winslow’s schools, at all levels, were of little interest to Kingsbury. He devoted one paragraph to the topic, talking about the situation in 1892. Fortunately, local historian Jack Nivison has approached the subject with more enthusiasm.

Nivison emailed that through his research, “particularly of very old Town Reports,” he found Winslow’s earliest schoolhouse for students up to eighth grade was the Fort School, built in 1819 on the west (river) side of Lithgow Street. Lithgow Street roughly parallels the Augusta Road (also Routes 100 and 201) along the Kennebec River, for a short distance south of the Sebasticook-Kennebec junction.

The 1819 school was named the Village School (and the area is designated on an 1879 map as Winslow Village). Nivison wrote the schoolhouse was diagonally across from and a little south of the Congregational Church, which was on the east side of Lithgow Street.

George Jones Varney’s 1881 Gazetteer of the State of Maine said Winslow had 15 schoolhouses by then. He valued them at $3,500.

In 1892, Kingsbury wrote, there were 16 school districts, but still only 15 schoolhouses, and only 11 districts held classes.

There were two free high schools in 1892, Kingsbury wrote. One was “at the village of Winslow”; the other was “in the eastern part of the town, near the Baptist church.” The Baptist Church had been built in 1850, he said, but he gave no more specific location.

In 1892, Kingsbury wrote, the town paid $250 to support the free high schools, which enrolled 80 students. There might have been additional state funding for the high schools; he said that the $250 was in addition to $1,400 “public money” and $1,500 from local taxes for 604 pre-high-school students.

Nivison says there were “attempts to formalize some post 8th grade courses in a couple of the existing schools,” perhaps the “high schools” Kingsbury mentioned. 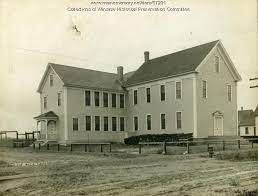 The first Winslow High School, Nivison says, was in a disused Methodist Chapel on Birch (now Monument) Street, which runs between Clinton Avenue and Halifax Street (Route 100), along the top of the hill east of the Kennebec, parallel to Bay Street.

In 1899, he said, the Town of Winslow signed a lease with the Waterville Methodist Church “to renovate their unused Chapel” into a high school. He has a copy of the lease; as further evidence, he points out that Winslow High School graduation programs and the wall display in the present high school building date the school to 1899.

Nivison says the first freshman class had 18 students. By graduation in 2003, at the Congregational Church, the class was down to three students.

The original Fort School closed in 1909 or 1910, Nivison said, because more space was needed and because spring floods on the Kennebec had become a problem. A second Fort School, “built across the street on a higher level,” served as an elementary school well into the 1930s.

In 1904, Nivison continued, town officials had a three-story wooden school built on Halifax Street. The lower grades were on the first floor and the upper grades on the second and third floors.

“During the winter break in 1915 this school burned flat to the ground,” he wrote. It was replaced by a brick building that opened for classes in February 1916, again with lower grades on the first floor and upper grades upstairs.

The “new” Winslow High School, was built in 1928. It has since been replaced with a new building.

Winslow’s student population continued to grow, and in the spring of 1928, Nivison wrote, a new Winslow High School opened on Danielson Street. This school was about half a mile north of the previous ones; Danielson Street runs east off Benton Avenue, roughly parallel to Clinton Avenue.

Initially for grades seven through 12, the new high school quickly changed to grades eight through 12, Nivison wrote. The Halifax Street School became one of Winslow’s two brick elementary-school buildings (the other was the Boston Avenue School, built in 1921).

The Danielson Street site now hosts a complex that includes the current Winslow high and junior high schools and sports fields. Winslow Elementary School is adjacent, on the east side of Benton Avenue a short distance north of the other two schools.

Nivison says the Boston Avenue and Halifax Street schools were both demolished in the early 1990s. The Halifax Street School was considered as a new public library after the 1987 flood destroyed the Lithgow Street library building, but voters defeated the proposal.

Instead, town officials acquired the former roller-skating rink, also on Halifax Street, and converted it into the present library.

According to the McClintock and Strong Biblical Cyclopedia, found on line, Rev. Job Chadwick was born about 1770, in Maine. An on-line Chadwick genealogy gives his birthdate as Dec. 4, 1756, “the fourth child of James and Ruth (Hatch) Chadwick.” The latter date matches his marriage date, also in the genealogy.

That source says James and Ruth brought their family to what would become China in the spring of 1782, establishing a farm at Chadwick’s Corner (near present-day Erskine Academy).

In 1796, according to the Biblical Cyclopedia, Chadwick “was ordained an evangelist” in Vassalboro, and a year later began eight years as pastor of China’s Second Baptist Church (once called the First Harlem Baptist Church), in South China Village at the south end of China Lake.

Another website, quoting Joshua Millet’s 1845 “History of the Baptists in Maine”, says this newly organized church was an offshoot of the Vassalboro Baptists. Starting with 19 initial members, who worshipped in a “neat and commodious brick edifice,” it grew slowly over the years, with Chadwick occasionally filling in as its preacher after he left in 1804.

Yet another on-line source records one of Chadwick’s actions: on Feb. 24, 1799, he “Joined in Marriage” Joseph Eveans or Evens (the Harlem clerk’s records have one spelling for the marriage intentions in January and the second for the actual marriage in February; your writer suspects the correct spelling is Evans) of Harlem and Jean Johnson of Ballston. (Ballston Plantation became the towns of Jefferson and Whitefield.)

The Biblical Cyclopedia says that after about 11 years as a missionary “under the direction of the Massachusetts Home Mission Society, in the destitute regions of Maine and on Cape Cod,” Chadwick took a pastorate in Gouldsborough, where he served from 1816 to 1831.

Chadwick died on Dec. 25, 1831, in Windsor, according to the Biblical Cyclopedia, or in January 1832, with no town specified, according to the genealogy. The latter claims he lived in China, saying nothing of missionary work or Gouldsboro. However, it also says he was the first and only teacher in town and was for years “the only spiritual guide the people of the town had of their own number,” making it clear all sources are describing the same man.