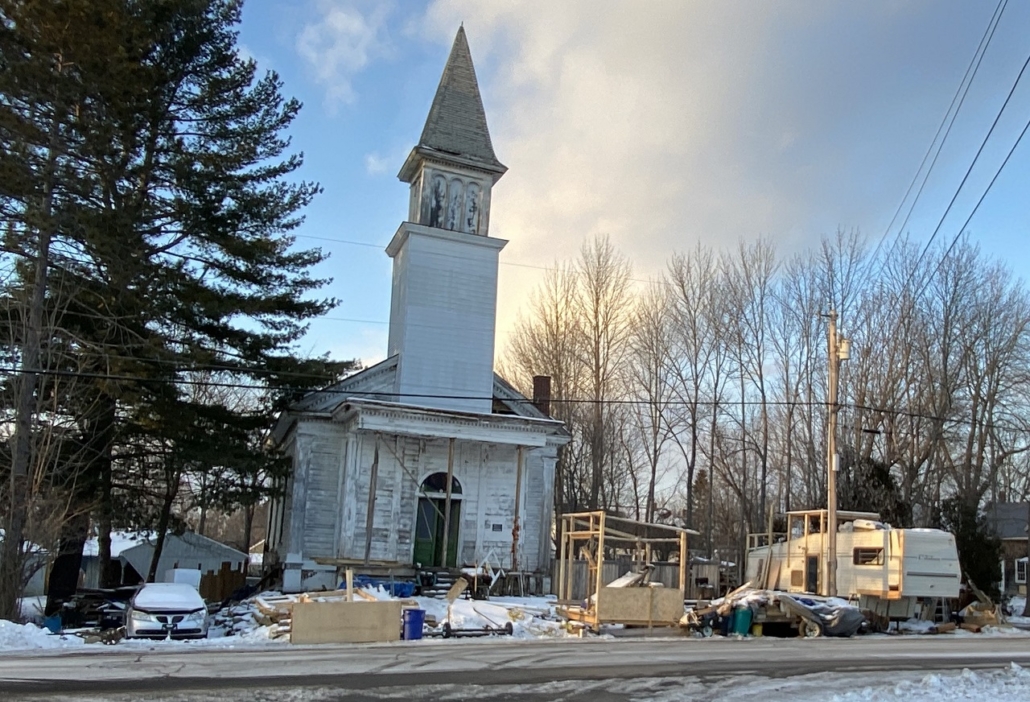 In her 1971 history of Vassalboro, Alma Pierce Robbins wrote that the North Vassalboro Methodist Church was organized around 1850. Its members met in a Union Church (whose origins apparently are not recorded) until about 1875, when they bought an unfinished Winslow church and brought it to Vassalboro.

Fifty years ago, Robbins wrote, “This pretty little church stands to this day,…white, with a steeple pointing heavenward and a bell to ring on Sunday morning.”

Chad Caron told Vassalboro selectmen many residents would like to see the former Methodist Church on Priest Hill Road in North Vassalboro restored, not demolished. Some, he said, have helped him as he works on the dilapidated building.

People serious about preserving the church need to act fast, because select board members have given Caron 30 days to make progress in two directions.

After a public hearing that took more than an hour at the beginning of the Jan. 6 select board meeting, the two board members present voted that the church as it now stands is, legally, a dangerous building. The dangerous building order they approved directs that the building be demolished after 30 days.

However, select board members accepted Caron’s offer to get an engineer’s certification that the building is structurally safe; and they authorized new Codes Officer Ryan Page to extend the deadline if Caron can justify asking for more time.

Caron agreed Page will be invited to be present during the engineer’s inspection.

Just-retired Codes Officer Paul Mitnik reminded Caron and board members that Caron currently has no building permit and therefore cannot work on the building. However, board members expect Caron to continue to clean up the lot around it.

Caron has owned the former church for about two years. He explained that his first plan was to rebuild it as his own house.

He is using the property for his business, buying, selling and trading miscellaneous items. He stores things in North Vassalboro until he sells or reuses them; the collection in the yard changes, he said.

Mitnik and other residents said the unattractive “junk” reduces neighbors’ property values, could harbor rodents and includes bulky items so close to the road that they are in the way of town snowplows.

Mitnik said he has tried to get Caron to make improvements to the building and lot for 18 months, without success. Caron is hard to get hold of and does not meet deadlines to which he agrees, and overall the property is not improved. After too many missed deadlines, Mitnik said, he revoked Caron’s building permit – a year ago, Page added.

As the basis for their contention that the building is unsafe, Page and Mitnik supplied select board members with photographs that they said showed an inadequate foundation and inadequate support for the church’s steeple.

A solid foundation is essential, Mitnik said. He does not expect the building will fall down on its own, but is concerned about what might happen in a major storm.

Caron agreed that he has “overpromised and underdelivered,” giving Mitnik unrealistic deadlines and being too embarrassed to admit he couldn’t meet them. He apologized to Mitnik, to his “great neighbor” who puts up with the mess and to town officials.

The building is not going to fall down, Caron said, nor is the steeple going to topple over. He explained how solid the basic post-and-beam construction is – the crumbling bricks on the ground are a façade, not building support, he said – and what he has done for run-off control on the lot and repairs underneath to remedy past damage and prevent future damage.

He also removed an outhouse that had been attached to the back, relieving stress on the back wall and eliminating any possible source of sewage contamination.

He did do some clean-up as Mitnik requested, he said, and he is arranging a different storage location on a small part of a friend’s property on South Reynolds Road.

Select board member Chris French pointed out that despite promises to clean up the lot, Caron keeps bringing in more things.

Acting board Chairman Barbara Redmond asked Caron when he would have the lot cleaned up. Caron invited her to stop by and watch him working, and said he intends to finish “by summer” – having learned not to promise impossible time frames.

Fire Chief Walker Thompson asked for an overall time limit. Caron said he originally thought making a livable house would take eight months. After a year and a half just getting the structure level, he figures he’ll need another five years if he continues working alone.

Caron said he could not afford the estimated $1,500 to have an engineer’s safety report done when Mitnik raised questions about structural integrity last year. Caron’s mother, sitting beside him at the hearing, immediately said she will pay for it.

Caron said he now plans to restore the church as part of Vassalboro’s history. The front columns that he took down are in Norridgewock being refinished, and he has not removed the old tin ceiling.

He offered to give the building to someone who could and would undertake restoration. Now that he intends a community project, he plans to consult with the Vassalboro Historical Society and community leaders and to ask for financial help.

If the building must be demolished, Caron said he will take it down piece by piece, number each piece and store them until he is able to reassemble them.

Because select board Chairman Robert Browne was unable to attend the Jan. 6 meeting, most other agenda items were postponed to the board’s Jan. 20 meeting.

Redmond and French approved the Conservation Commission’s letter asking the Department of Inland Fisheries and Wildlife to let the town take over maintenance of the trail to Spectacle Pond.

A brief discussion of the sunken Vassalboro Sanitary District manhole covers on Main Street in North Vassalboro led to no decision. Resident Tom Richards recommended putting money for repairs in the 2022-23 town budget. Town Manager Mary Sabins said one effort to fill in around them had failed when the fill promptly washed out.