On Sunday, September 11, the Vassalboro Historical Society resurrected the tradition of presenting the Boston Post Cane to the oldest resident of town. A cane created by Ray Breton and engraved with Vassalboro – Oldest Resident 2016 was presented to 98-year-old Charlotte Eastman, identifying her as Vassalboro’s oldest resident. Mrs. Eastman also received a certificate and a bouquet of flowers.

Vassalboro history did not record the name of the last recipient. The cane disappeared for years until an antique dealer in California purchased it and called to see if someone at the historical society would be interested in it. Betty Taylor purchased the cane from him for $500. Although the actual Boston Post Cane will reside at the museum, a display will be created showing Mrs. Eastman as the virtual owner. 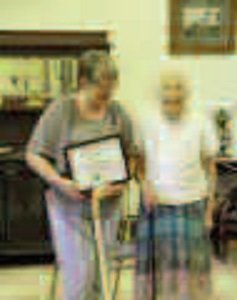 Mrs. Eastman moved to Vassalboro shortly after marriage to Albert in 1950. She quickly became an active member of the community. She has been involved in town with the Riverside Study Club, Church Women United, Girl Scouts, and the Vassalboro Food Pantry. These are just a few of her connections. She enjoys camping (and went this summer), has served as church organist, played in the Hallowell Community Band, and is a shorthand pen pal.

In 1998, Mrs. Eastman took on the role of caregiver, when Mr. Eastman was diagnosed with Alzheimer’s. She also became active in the Alzheimer’s Association. He passed away in 2003, and Mrs. Eastman entered a new chapter in her life, staying active, traveling, and continuing her service to the local community.