It’s simply amazing what you come across in the woods of Maine. Last weekend, while preparing to open camp for the season, my wife and I were helping some friends next door do some raking and leaf pickup, when the wife showed me something that she had raked up. It looked kind of odd. OK, something else I had never seen in the 29 years my wife and I have been there.

It was round, like an orb, a little smaller than a tennis ball. Brown in color, with black bristles all over the exterior. At one end was a hole with what appeared to be dried mud inside.

That evening, I perused through the myriad of books I own and found nothing that really resembled it. The closest I came was that of a milkweed stock, but still didn’t look the same. So, I turned to my contact at the Maine Department of Inland Fisheries and Wildlife, in Augusta. His initial thought was a gall, but he would confer with his botanist colleagues.

Basically, a gall is a kind of swelling growth on the external tissues of plants or animals. They are abnormal outgrowths of plant tissues, similar to benign tumors or warts on animals. They are caused by various parasites, from fungi and bacteria, to insects and mites. They are highly organized structures and because of this the cause of the gall can often be determined without the actual agent being identified. In human pathology, a gall is a raised sore on the skin, usually caused by chafing or rubbing.

In the end, what we had found was not a gall.

Several emails later, my contact replied following some consultations with the botanists, and were wondering if it might be a Chestnut gall. This would only be possible if we had a mature Chestnut tree on the premises. There are none that we are aware. 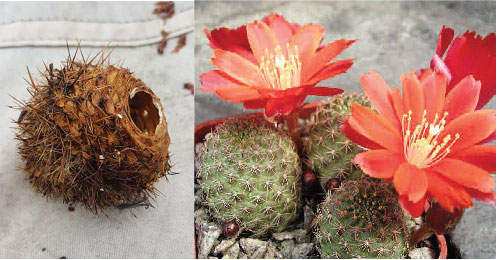 What we found, left, and what we think it is.

Then, another state botanist, Don Cameron, concluded that there are no trees in Maine with galls that have multiple spines from the same attachment point and therefore he speculated that it was most likely a cactus house plant that was thrown away in the yard some time ago.

He concluded the orb was possibly that of the Aylostera vulpina plant, a cactus that is native to Bolivia and Argentina, but very popular as house potted plants. In the wilds of South America, they grow at altitudes of 3,400 – 3,900 feet. I was not able to find a common name for them.

The plant is easy to grow and recommended for beginners. They prefer a gritty, porous soil mix with a pH slightly on the acidic side. Full sun to light shade. The root system is rot prone so watering should be monitored closely.

It’s recommended to let the pot dry out before adding water. It is winter hardy and will sustain temperatures below freezing. They require a winter rest period.

This species of cactus will occupy a small flower pot comfortably and remain a manageable sized house plant. The flower is bright red with scarlet petal tips and white stigma.

They are subject to mealy-bug attacks and to fungus and rot brought on by over-watering and high humidity.

It appears that in cultivation they grow larger and cluster more vigorously than in the wild.

The site where the pod was found has had a high turnover rate in the past 6 – 10 years so could very conceivably have been a potted house plant. The area had not been raked in quite some time.

I guess, for the time anyway, we have solved another “mystery” at camp.