Well, actually, that was a question I always wondered myself. I always thought that maybe their antlers were like whiskers on a cat, using them as feelers to determine whether they can pass through an opening. 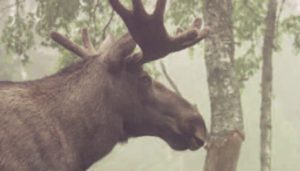 It turns out I probably wasn’t far off with my assessment.

I turned to my contacts at the Maine Department of Inland Fisheries and Wildlife for an answer. According to the state moose biologist Lee Kantar, “As the moose antlers grow, the moose ‘develop’ a sense of their width.” I can only deduce that the same holds true for deer.

Following the fall rut, male deer and moose will shed their antlers. In spring or early summer, March or April, the new antlers begin to form, growing out from a pedicel bone, a bony stalk situated on the frontal bone of the skull. The antlers begin to grow at a rapid pace. During growth, they are covered with a skin, called the velvet, a living tissue, which contains many blood vessels for the nourishment of the growing bone tissue.

“During antler growth,” said Kantar, “the antlers are highly vascularized and the moose can feel where those antlers are, touching other surfaces during the growth phase.”

When the antlers have reached the size and shape characteristic for the particular species, the blood circulation in the velvet is stopped, the velvet dies, and the buck or bull then rubs off the dead skin against branches,

In the case of moose, “During antler growth this velvet layer of hair that covers the antlers are the ‘feelers’ for the antlers,” the biologist continued.

“At the end of August into September the antlers essentially harden into bone and the velvet is rubbed and sloughed off as the bull thrashes and rubs against vegetation. By this time, the bull has essentially ‘learned’ the dimensions of his new antlers for his travels.”

Deer and moose have played a very important role in the history of our country, especially deer. The American Indians and European settlers depended on deer for food clothing, implements, ornaments, ceremonial items, tools and weapons. The hides provided shelter and protection from the weather.

Did you know the term “bucks” when referring to money comes from the American Indians. Deerskins were considered valuable for clothing and the skins were called “bucks.” They were traded for various other articles.

Lewis and Clark might never have been able to finish their journey from St. Louis to Oregon if the hunters they took along had not furnished them with deer meat along the way. For the four months they wintered in Oregon, they had little to eat other than deer meat.

Have you ever seen a set of deformed moose antlers on a mount, and wondered why? Well, if a bull moose is castrated, either by accident or chemical means, he will quickly shed his current set of antlers and then immediately begin to grow a new set of mishapen and deformed antlers that he will wear the rest of his life without ever shedding again.

I know I wandered off the initial subject, but I found all this information fascinating. I hope you did, too.