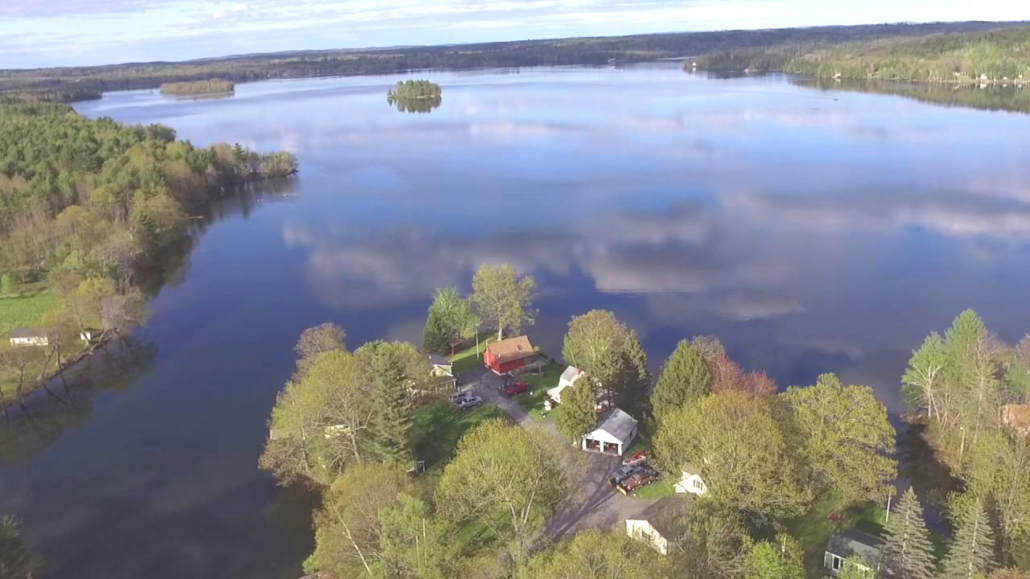 by Roland D. Hallee
with contribution from Susan Traylor

The Webber Pond Association annual meeting was held on August 14, at the Vassalboro Community School with 88 association members present.

There were several controversial items on the agenda at this year’s meeting, including the drawdown, association membership, and ownership of the Webber Pond Dam.

One of the topics that drew considerable debate, as is the case annually, was the yearly drawdown. At their meeting in July, the board of directors recommended the third Sunday of the month, Sunday, September 19, which has been the drawdown date for the past several years. The date of September 26 was mentioned during discussion. The September 19 drawdown date was approved 46-42.

In the end, it was decided to conduct the drawdown differently this year because of the lake conditions.

A mini flush began later that day, on August 14. The lake is presently experiencing a severe algae bloom, with Secchi visibility of only 1.94 meters/6.4 feet, combined with high water levels due to all the rain. The lake level currently stands at 5.5 inches above the spillway. The mini flush will allow the removal of algae and phosphorus without significantly impacting water levels for recreational use.

One foot of boards were removed on both sides of the gates at the dam – they will be replaced in a week or when the water level reaches the spillway. If there is no rain, the lake normally loses about an inch a week due to evaporation, so the mini flush is a low-risk strategy. Last year the water was about even with the spillway at this point.

The normal annual flush will begin on Sunday, September 19, with three feet of boards removed on both sides. Typically, water levels at the dam have gone down 12 inches in the first week, eight inches in the second week, and four inches in the third week of the drawdown. Another change this year is that the boards will be replaced on October 3, in accordance with Department of Environmental Protection (DEP) recommendations to limit the time that lake bottom sediments are de-watered. Per DEP, draining the top several feet in a lake reduces the total lake volume by a large amount and often exposes large areas of lake bottom. This exposes significant areas of fine sediment to drying and can expose previously stable sediments to heavy rain, wind, and wave action for months, releasing phosphorus into the lake. This could be the issue with increased sediments in the very shallow areas of the lake, which are perceived as lower water levels.

A final flush, when boards are removed to set the lake at winter water levels, will take place in late November. Russell Charleston, who this past year was responsible with monitoring the dam and the lake levels, was approved by the membership to monitor the situation and will choose the date, based on weather conditions, and will post it on Facebook.

Last year there were very high phosphorus readings 0.057 (compared to figures normally in the 0.018 to 0.025 range). This indicates that phosphorus was brought to the surface when the lake turned over (cooler water on the top of the lake sank and warmer water from the bottom rose). Most of the phosphorus in the lake is on the bottom of the lake. If that were to happen again this year, more phosphorus could be flushed from the lake.

In other business, another controversial issue was the proposal to limit association membership to shoreline property owners only. Current by-laws state that anyone with an interest in the lake may become an association member. Following much, sometimes heated, debate, the motion was rejected 36-52.

Following that vote, Reuthe announced he would be forming a committee to review the by-laws in their entirety.

The proposal to ask the town of Vassalboro to assume ownership of the dam, currently owned by the association was quickly tabled to next year, pending more research and communications with the town.

The membership also voted to contribute $1,500 to the China Region Lakes Alliance. During that discussion, it was decided Webber Pond Association should look into forming a LakeSmart program, as is the case on China Lake, where the program has been very successful. CRLA Executive Director Scott Pierz was present at the meeting, and provided an overview of how the program works.