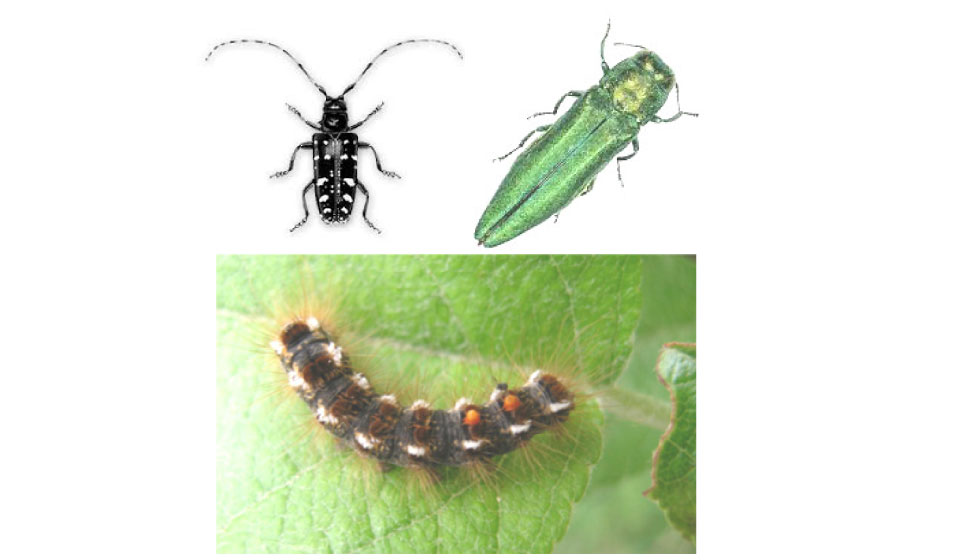 We received a visitor at camp last week. A member of the Maine Forest Service appeared to pass on some information to us about the threat of invasive insects, and to educate us on what to look for.

First was the Asian Longhorned Beetle. The ALB, Anoplophora glabripennis, is a wood boring beetle native to Asia. It attacks, and eventually kills, healthy hardwood trees, including maple, birch, poplar, willow, elm and others.

It was first discovered in the United States in 1996 in Brooklyn, New York, and has since been found in New Jersey, Illinois, Massachusetts, Ohio, as well as Toronto, Canada. It has yet to be found in Maine, and has been eradicated from Illinois, New Jersey, parts of New York and Canada.

It is thought to have been transported into North America through solid wood packing materials from Asia.

What to look for: Round to oval pockmarks in the bark where an adult female has chewed a depression to lay an egg. Round holes 3/8-inch in diameter on the trunk or branches where the adult beetles emerge. You can insert a pencil at least an inch into an exit hole; and sawdust-like material which the beetle larvae push out as it feeds in the tree.

These insects are usually active from August to October.

The next one is the Emerald Ash Borer, Agrilus planipennis. It was first detected in Michigan in 2002. Evidence suggests that the beetle was established for years prior to its discovery. EAB has since been found in many states, and also in Ontario and Québec, Canada. In addition to spreading by natural means, EAB can be transported to new areas in infested firewood, timber and nursery stock. This beetle has been responsible for the loss of millions of ash trees in North America.

New infestations are difficult to detect, as damage to the tree may not be apparent for up to three years. Symptoms of an infestation can include branch dieback in the upper crown, excessive epicormic branching on the tree trunk, and vertical bark splits. Woodpecker damage is sometimes apparent.

Do not move firewood or bring it from home if you’re going on a camping trip. If you brought firewood from home, don’t leave it, burn it!

The third one was the browntail moth. It is an invasive species found only on the coast of Maine and Cape Cod. I don’t know how far inland is considered the coast, but I have seen this caterpillar at our camp, as recently as this past weekend, even though it is supposed to be active only from April to late June. The moth is an insect of both forest and human health concerns.

The browntail moth caterpillar has tiny poisonous hairs that cause dermatitis similar to poison ivy on sensitive individuals, similar to that of the Hickory tussock caterpillar (the white caterpillar with black hairs).

People may develop dermatitis from direct contact with the caterpillar or indirectly from contact with airborne hairs. Most people affected by the hairs develop a localized rash that will last for a few hours up to several days, but on some sensitive individuals the rash can be severe and last for several weeks. Respi­ratory distress from inhaling the hairs can be serious. The hairs remain toxic throughout the summer but get washed into the soil and are less of a problem over time.

The browntail moth arrived in Somerville, Massachusetts, circa 1890, and becoming widespread there and in neighboring Cambridge by 1897. Initial outbreaks were most evident in pear and apple trees. Within a few years it was seen as a serious, fast-spreading, horticultural and health problem. Through the early parts of the 20th century it was present in much of New England from eastern Connecticut to Maine, and northward into New Brunswick, Canada, but the 1906 introduction of the parasitic tachnid fly Compsilura concinnata to counter Gypsy moths collaterally impacted brown-tail moths. By the late 20th century the habitat was reduced to the coast and islands of Maine, and also parts of Cape Cod, Massachusetts. Cold and wet weather hinders re-expansion of the population outside its current territories, although starting in 2015 there has been a population spike and territory expansion in coastal Maine, from Portland to Bar Harbor.

If you think you have found some of these, contact the State Department of Agriculture, State Forestry or Natural Resource Agency, Cooperative Extension Office, the USDA Animal and Plant Health Inspection Service, or the Forest Service.

Roland’s trivia question of the month: