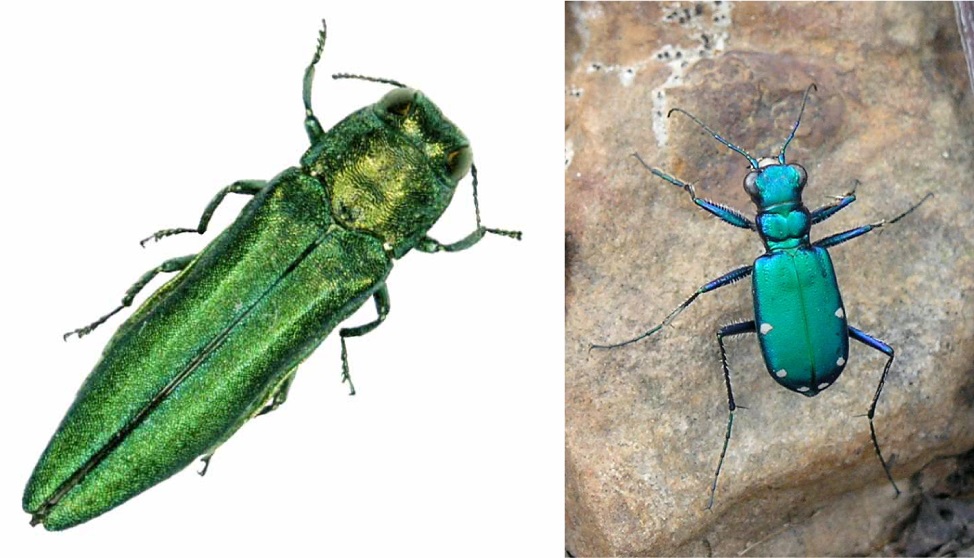 Of all the animal species on earth, approximately 40 percent of them are beetles. Many of them look alike. That is probably why a friend of mine related to me that he had seen an emerald ash borer in Vassalboro and killed it, because, as a fairly knowledgeable woodsman, he knew how destructive they can be to the forest.

According to Allison Kanoti, state entomologist with the Maine Forest Service, Forest and Health Monitoring, and entomologist Colleen Teerling, there are no known emerald ash borers (EAB) in central Maine.

They do exist in Maine, but have been isolated to northern Aroostook County and western York County towns. I guess the logical question is, how can this invasive beetle be found in northern and southern Maine, but nowhere in between.

Anyway, they are being contained in those two counties because the transportation of untreated firewood into Maine from other states and provinces of Canada have been prohibited, as is movement of untreated firewood out of those quarantined areas. Firewood provides a free ride to a staggering host of insect and disease-carrying organisms that pose a threat to our forests. That is why it is encouraged for people to use local firewood.

So, what did my friend see?

They are commonly found in deciduous forests from Minnesota, east to Rhode Island, and north to Ontario. They are also found as far south as Kentucky.

They are easily recognizable, if you know what you’re looking for, by their large, white, overlapping mandibles and six yellowish spots on their bodies. They are also a brilliant green, which resembles to EAB. However, don’t let the spots fool you. Some of the species will have more spots, fewer spots or none at all, again possibly leading to a misidentification.

The mandibles give this insect a menacing appearance, but they are only predators of small anthropods. They do not bite humans unless handled or feel threatened.

This species is associated with wooded areas and they are often found in sunlit patches clear of undergrowth such as dirt paths and fallen logs where they hunt caterpillars, ants, spiders and many other kinds of anthropods. Although they are not gregarious, many beetles may sometimes be seen in one suitable hunting area. 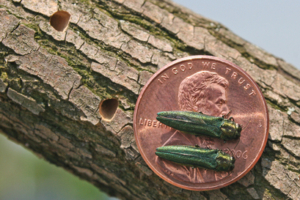 The letter D-shaped holes in a tree produced by the emerald ash borer.

Like as many as 147 types of tiger beetles in the United States, this species has a two-year life cycle. During this time it goes through a complete metamorphosis. This means they have four separate stages during their lifetime. The first is the egg stage. The female lays eggs in individual holes in the ground during June or early July. The egg hatches and the second stage, known as the larval stage, begins. The larva resembles a caterpillar, but with two unique characteristics. The first is the two sickle-shaped jaws protruding from its abnormally large head, which it uses to catch prey. The other is a hooked hump on its back, which prevents it from being pulled out of the ground. The entirety of the larval stage happens underground. It then reaches the third stage, the pupa a year later. The pupa begins to make its way out of the ground by digging toward the surface diagonally. The adult form of the beetle emerges within a month. The beetle is sexually mature in the spring, mates, and dies during the summer months.

The tiger beetle, not more than a half inch long, is a ferocious predator in the insect world. It is carnivorous throughout the span of its life. The six-spotted green tiger beetle is an active creature with the ability to run and fly at great speeds; this is not the case for most beetles.

Now, getting back to the emerald ash borer. Should you find holes in trees in the shape of the letter D, please contact the Maine Forest Service, so an entomologist can be dispatched to investigate and possibly confirm or discount the existence of the insect in our area.

Hopefully, for the sake of our forest, you never come across one.

To be politically correct, which NFL team would you be describing in the following manner: