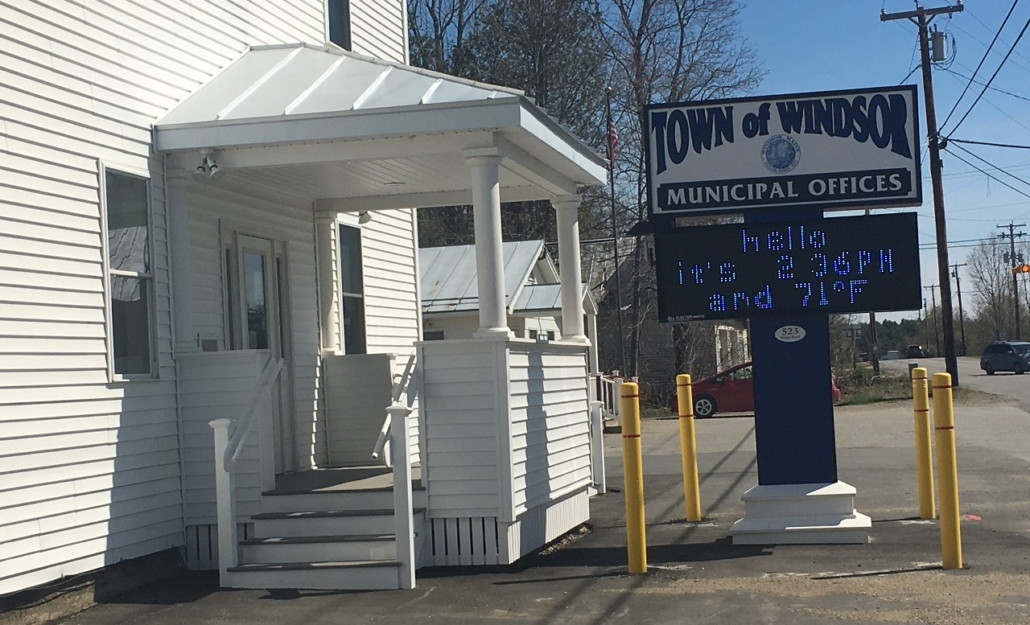 Paving bids and a proposed solar project for local schools were discussed at the Windsor Selectmen’s meeting on July 23.

The meeting began with the public review of paving bids which were submitted earlier that evening to Town Manager Theresa Haskell. Bids were for projects on Piper Road, Coopers Mills Road and Griffin Road. These projects were factored into the current budget recently approved by voters.

Prior to the meeting, Haskell compiled the bid information into a comparison chart for the selectmen to review while asking questions and making their determination. Representatives from seven paving companies were on hand to listen and answer questions. Many of the paving crew members in the room knew and worked with or for each other in the past.

Most of the town roads are on a six- to seven-year maintenance schedule. Road maintenance may consist of crack sealing, shim work (a thin layer of asphalt thicker than a micro-surface, applied to the existing surface of a street), overlay (a layer of asphalt thicker than a shim applied to the existing surface) and complete resurfacing. According to Haskell’s research, road paving work averages $100,000 per mile.

The bids ranged from $235,560 to $361,510, with the average price of material coming in at $34.04 per ton. Over and above work (work discovered during the paving process) may include shoulder work, grading work and gravel.

The paving bid contract was approved and awarded to Maine-ly Paving Services, LLC. They are expected to start the paving project late summer to early fall.

Public work supervisor Keith Hall’s report continued to talk about road maintenance. The public works crew is completing ditching work to the rock wall along Reed Road. They are working on approximately 40 feet, but have hit ledge and will need to hire a “hammer.” Hall will be researching equipment rental. The rock wall will be built up once they have freed it up from the old fencing and deep tree roots.

Transfer station supervisor Tim Coston confirmed that the station revenue from incoming fees was down $2,000 from last year, with no explanation. Haskell reviewed the Department of Environmental Protection (DEP) inspection report regarding the transfer station. The last time the DEP inspected the transfer station was in 2011. Not much has changed since then. Grass was well maintained and there was no sign of animals burrowing. Although saplings were observed around the “cap” at the station, the DEP inspector recommended only more mowing.

It was also noted that due to the Windsor Fair, the transfer station will be opened only from 9 a.m. until noon on August 31.

During the public comment period, Regional School Unit (RSU) #12 School Board member Richard DeVries discussed the RSU #12 solar project and asked the selectmen if they wanted to be part of the planned feasibility study.

RSU#12 is investigating purchasing a property to be utilized as a solar farm. The solar farm location (which has yet to be determined) must be able to accommodate a large number of solar panels and have power lines in place, adequate to handle the power generated. The proposed solar farm will need to generate power for multiple locations including the local schools. Board members are looking into a bond to pay for the project and a 20-year agreement for installation and maintenance. In addition, DeVries is reaching out to partners who might want to invest in the project and use some of the power.

In other business, Haskell reviewed the finalized numbers from last year’s budget. Overall, the town spent only 89.72% of the total approved 2018-19 budget, despite the fact that utilities, (which includes public safety) public works and Maine Municipal Management Services all went over their projected budgets.

The selectmen will hold their next regularly scheduled meeting on Tuesday, August 6.

Obituaries for Thursday, August 8, 2019 SOLON & BEYOND: Remembering our class trip to Washington DC
Scroll to top