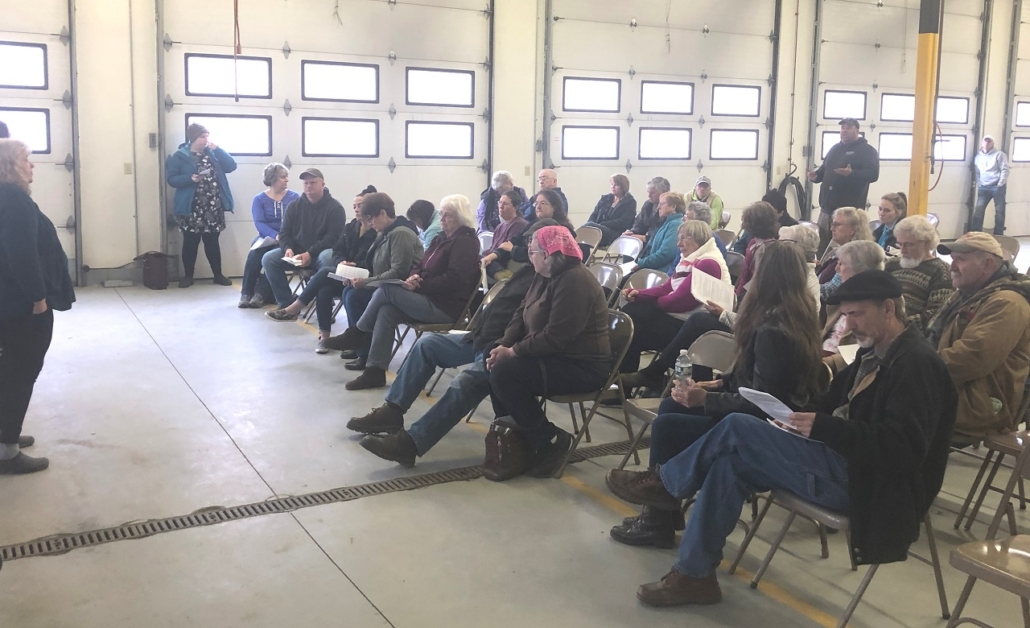 A group of approximately 40 Albion residents listen to a presentation by Kara Kugelmeyer (left and below). (photo by Steve Ball)

ALBION, ME — A group of Albion residents have been working to figure out what options are available to town residents in light of the recent decision by the MSAD #49 School Board to consolidate the elementary schools of Clinton, Benton and Albion. Consolidation would result in closing the Albion school. Closure of the town’s school is yet another loss for Albion and could have, as moderators said during this meeting, long term consequences for the town.

The group, led by residents Kara Kugelmeyer and Billie Jo Brown-Woods, moderated an information session for interested people in Albion following the annual town meeting on Saturday, March 19, in the town’s fire and rescue building.

The MSAD #49 School Board, the primary decision making body for the district, is made up of members from the towns of Fairfield, Clinton, Benton and Albion. Board members come from member towns with the numbers of voting members being allocated according to population. This results in the MSAD #49 board having two members from Albion and Benton, three members from Clinton and six members from Fairfield.

As explained, it has not been uncommon for small towns across the State of Maine to suffer school closures resulting from cost cutting efforts and attempts to improve administrative efficiencies in schools. These actions have generally been done to reduce the tax burden for an area or to accommodate shrinking student populations. The consequences of a school closure, Kugelmeyer explained, on small towns like Albion, can be stark and have long term impacts on the town’s economic viability and sense of community.

Kugelmeyer and Brown-Woods led the information session for over 40 interested town residents during which they laid out options for the town with possible consequences for each option. It was clear from the number of residents attending the voluntary meeting and the emotion expressed during the session that, for many, a closure of the town’s school would mark a potentially damaging inflection point in Albion’s history from which the town might not be able to recover.

The new consolidated school will be built in Benton, across from the current Benton Elementary School. Kugelmeyer and Brown-Woods stressed that not all aspects of the new school would be bad. There would be improved facilities and a greater number of school activity offerings for students, more than what Albion’s school offers.

Closing the Albion school and sending students to the new school, however, would not necessarily result in cost or tax savings to the residents of Albion, according to Kugelmeyer. Additionally, students would possibly have up to a two hour bus ride per day. Kugelmeyer cited studies looking at other small towns that have experienced school closures showing that the closer a home is to a school, the higher the home value, and the farther away, the lower home values tend to be. “Towns soon become a less desirable destination for new families looking to settle,” Kugelmeyer expressed. All of this affects the tax base for a town.

Kugelmeyer stressed the options available to the residents of Albion are few, but any action must be done soon. An option would be to vote “No” on the referendum to close the Albion and Clinton schools being put forward in November. While this is the easiest option for Albion residents, for the referendum to fail would require that a majority of voters of Fairfield, Benton, Clinton and Albion vote “No”. This would not mean, Kugelmeyer added, that the MSAD #49 board would bring this referendum up again. She commented that it is unlikely this referendum will fail as it largely benefits the towns of Fairfield and Benton, where the new school would be built.

The second option would be to withdraw from the MSAD #49 District. While this course would require more work by the town and its residents, this option, according to Kugelmeyer, would potentially be in the best long-term interest of Albion residents. The Withdrawing Option could mean saving the Albion School or establishing Albion as a “School Choice” town, allowing Albion students to attend any school in the local area, including MSAD #49 for all grades.

It was clear from the discussion by the moderators and the audience that the School Choice option appeared most appealing. But this would mean the town must form a committee to withdraw from the MSAD #49 District, hire a lawyer, draft a Withdrawal Agreement, and begin the process to withdraw within the next month.

While nothing was voted on or positively decided during this information session, it was clear the Town of Albion is quickly coming to a point of a decision that could mean the closure of the Albion school.