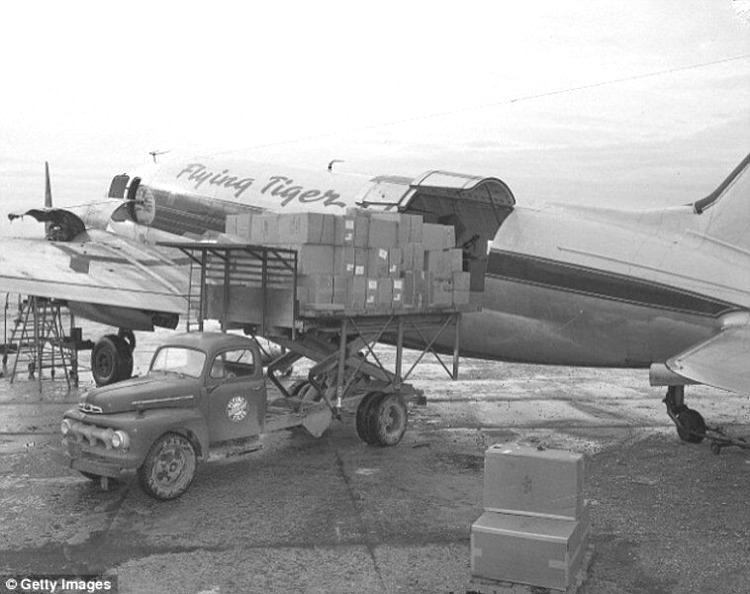 Flying Tiger Line Flight 739 being loaded prior to its ill-fated mission on March 16, 1962. (photo courtesy of the Weatherford Democrat)

After 60 years, Vietnam veterans are not forgotten

by Sean Sullivan
Wreaths Across America

Sixty years ago on March 16, 1962, Flying Tiger Line Flight 739 (FTLF 739) was on a secret mission sanctioned by President Kennedy, to fly to Vietnam. This secret Vietnam reconnaissance mission went missing and no trace of the plane or its passengers have ever been found. Onboard were 93 United States Army soldiers and 11 civilian crew members.

Very little is known about what happened to FTLF 739 and its crew and passengers, and due to the circumstance surrounding this mission, the names of those lost have not yet been added to the Vietnam Veterans Memorial in Washington D.C. How­ever, today many families of these heroes still fight to have them recognized for their contributions to our freedom and our shared history by urging people to write their Senators and help pass Senate Bill 2571. Senate Bill 2571 is presently up for vote with the Energy and Natural Resources committee and if signed would add the names of the heroic crew of Flying Tiger Line Flight 739 to the Vietnam Wall Memorial, in Washington DC.

Presently, the only monument that bears the names of these almost forgotten American heroes was erected by a private citizen, Wreaths Across America founder Morrill Worcester, on the tip land in Columbia Falls, Maine, where the 60th anniversary commemoration event was held.

“When I first heard the story about this mission, I was shocked to learn that nothing has been done for these families,” said Morrill Worcester. “I said that day, that we would do something to make sure these people are honored and remembered, and to hopefully give some closure to these families.”

The inscription on the monument reads:

“Missing in action; Presumed dead. Flying Tiger Line Flight 739 went missing on March 16, 1962, with 93 U.S. Army soldiers on board. These men and their flight crew perished in what would become one of the biggest aviation mysteries out of the Vietnam War era.”

Presently, this private memorial is the only recognition the heroes of FTLF 739 have ever received for their shared sacrifice to our nation. However, that can change. Senator Gary Peters (MI) introduced Senate Bill 2571). This bill which is presently sitting in the committee for Energy and Natural Resources seeks to have these long-forgotten heroes added to the list of names on the Vietnam War Memo­rial, in Washington D.C.

“As an Army veteran who has had the privilege of serving alongside so many amazing patriots serving in our special operations and intelligence communities I know we may never have the opportunity to share the full story of these men’s sacrifice,” said Joe Reagan, Director of Military and Veteran Outreach for Wreaths Across America. “This should not stop us from providing their families, and all Americans the opportunity to honor their service by saying their names in our nation’s Capital. Adding their names to the Vietnam wall alongside their 58,318 brothers and sisters who made the ultimate sacrifice during the Vietnam War is a fitting tribute to these men and a reminder to all of us that our freedom is oftentimes secured by men and women who serve in silence.”

Vietnam Veterans Day will be observed on Tuesday, March 29.

If you support our nation’s veterans and want to see American heroes recognized for their significant contributions to our freedom, please write your Senator and ask them to add the names associated with FTLF 739 to the Vietnam War Memorial.