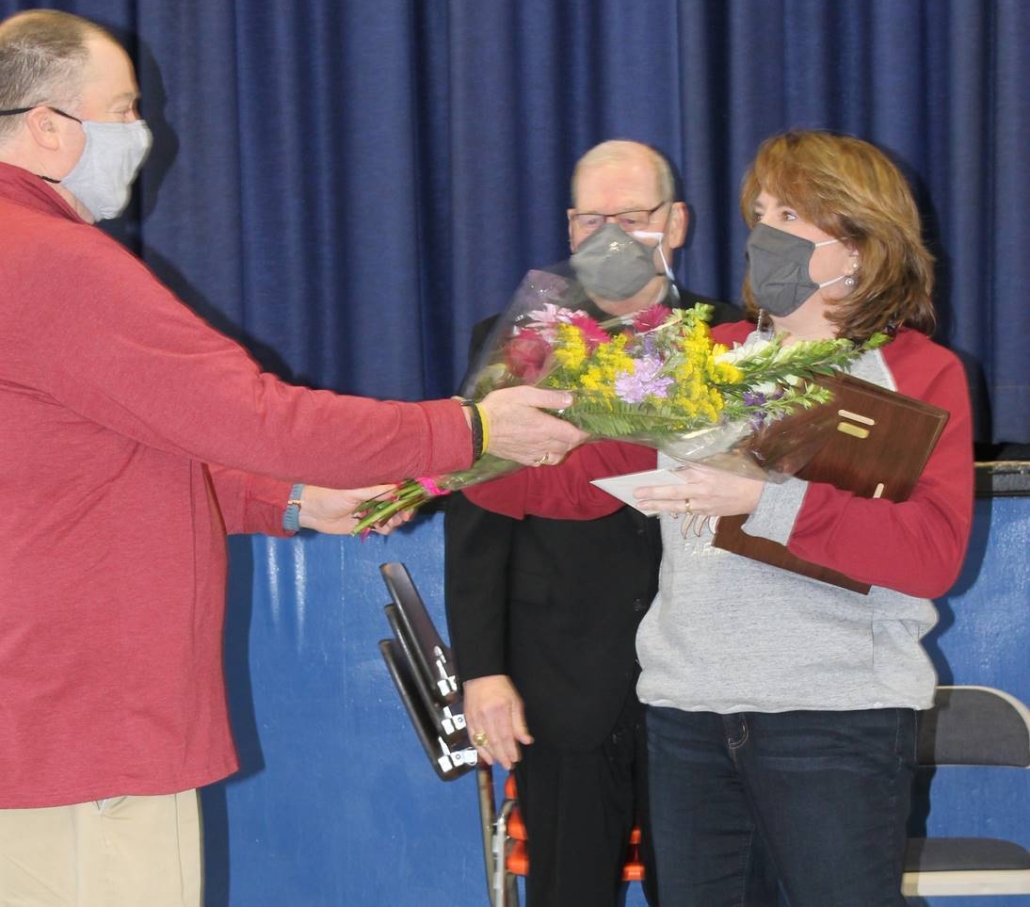 “In January of 2019, I was diagnosed with Stage 4 cancer for the second time. This would require a major surgery and brutal treatments which would last at least two years,” said Kevin Cullen, principal of St. Michael School, in Augusta. “Someone needed to step up, and for us at St. Michael School, it was Jennifer Hoffman.”

English teacher, vice principal, and advisor are just a few of the many titles that Jennifer Hoffman successfully holds at St. Michael School, earning her the respect and reverence of the students, teachers, families, and staff.

On Friday, February 5, she added another: 2021 Maine Catholic Schools Teacher of the Year.

Bishop Robert Deeley, along with Marianne Pelletier, the superintendent of Maine Catholic Schools, and Fr. John Skehan, pastor of St. Michael Parish, in Augusta, presented the award to Mrs. Hoffman during a surprise assembly that included a tribute video featuring the glowing and loving remarks of her students.

“She cares about all of her students, and I love being in her class,” said one boy student.

Moments later, the students rose to offer a standing ovation to Mrs. Hoffman as she was called to the front of the assembly held in the socially distanced school gym.

Bishop Deeley presented her with two special plaques marking the occasion, one for the school and one for Mrs. Hoffman that, fittingly, featured an apple for the teacher.

“In addition, Mrs. Hoffman receives $500 for her classroom, and $500 for herself,” said Pelletier, as Mrs. Hoffman was given bouquets of flowers by Cullen and her husband, who was in attendance along with her sister and son, Noah. 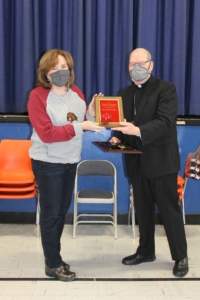 “You are outstanding at what you do,” added the bishop. “I’m so grateful for Mrs. Hoffman and all of our Catholic school teachers.”

Credit is something that Mrs. Hoffman is never quick to accept, the ‘downside’ of being one of the most humble and kind people to ever grace the halls in the nearly 130-year history of Catholic education in Augusta.

Which brings us back to Kevin Cullen, who, during the course of cancer treatments, was put on bed rest for almost four months, forcing him to miss graduation, enrollment efforts, report card creation, and tours for prospective families.

“In Catholic schools, we don’t have someone to step in because we do not have money for that,” said Cullen. “This was going to require our best full-time teacher to also be the full-time principal.”

Mrs. Hoffman maintained her full schedule of teaching junior high classes while assuming the additional duties of overseeing the entire school. She did it, to no surprise, with empathy and aplomb.

“She has worked for Catholic schools in Augusta for more than 25 years, the last 13 at St. Michael, and she is the walking embodiment of what a Catholic school educator needs to be in the 21st century,” said Cullen. “She is kind, patient, rigorous, fair, and faithful. Jesus is part of every lesson she teaches.”

Her ability to reach students with her dynamic and uplifting presence is well known in the area thanks to proven success.

“Our students take the NWEA test, as do almost all Catholic schools in Maine, and for the past five years, our seventh and eighth graders as a group have tested in the 99th percentile in Language Arts,” said Cullen. “Mrs. Hoffman oversees our accreditation work, organizing the entire staff to put together the work required to become an NEASC accredited school. She was also the first teacher on our staff to dive head first into remote learning when COVID-19 became a verb and we had to modify everything we did.”

The ability to change with the times is admirable, but the humanity and faith that Mrs. Hoffman delivers day in and day out at St. Michael are timeless.

“Her students know that she cares about them, that she loves them as her own, and that she will do whatever it takes to help them surpass their own goals,” said Cullen. “She doesn’t push people up the hill. Mrs. Hoffman is first up the hill leading the way, and everyone chooses to follow.”

Mrs. Hoffman resides in Augusta with her husband, Clay, and her two sons, Noah and Joshua.

FOR YOUR HEALTH: Poems That Can Help With Healing In Hard Times Area students give to those in need
Scroll to top