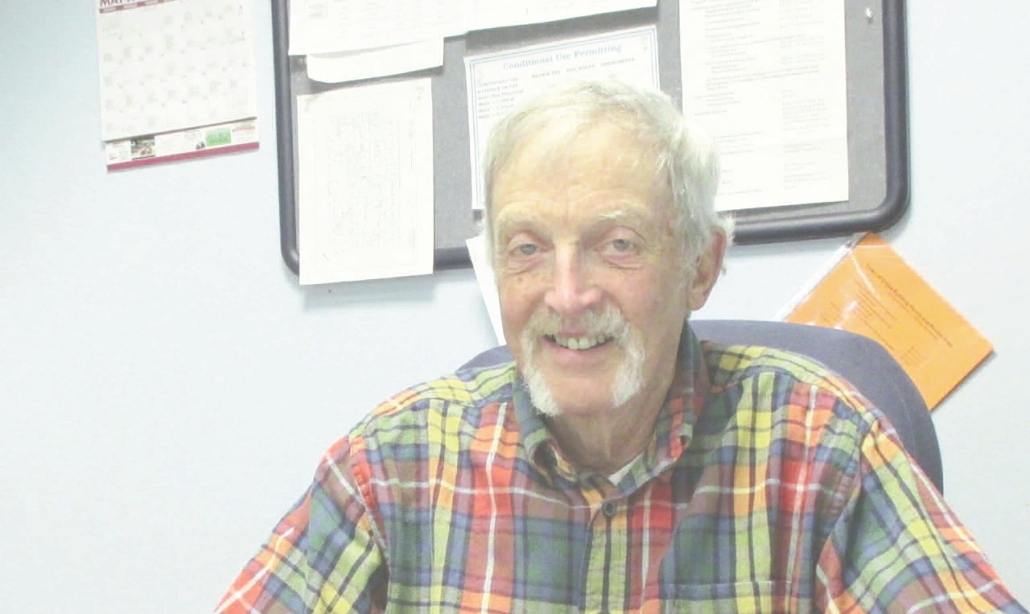 “I’m saying goodbye to China,” Paul Mitnik said toward the end of our June 25 conversation in his office in the town office. After four years as codes enforcement officer, licensed plumbing inspector and building inspector, Mitnik is moving on, sooner than he intended, with a mixture of regret and pleasure.

Regret because he has enjoyed working in China. Most people are “friendly and want to do the right thing,” and “I like the [Town Office] staff a lot – they work as a team and get along really well,” he said.

Pleasure because “I’m kind of excited about entering another chapter of my life.” Mitnik has three jobs already: as the two-day-a-week codes officer and plumbing inspector in Wayne, where he’s worked since May; as Palermo’s very part-time plumbing inspector; and as an on-call construction inspector with Augusta-based Kleinfelder engineers.

He said Wayne is another nice town with a pleasant town office staff. As in his previous jobs, he’s in a town with lakes – nine, he said – and therefore handles shoreland zoning issues with which he’s very familiar. Mitnik expressed appreciation to former China Town Manager Daniel L’Heureux and the selectboard who hired him four years ago as a part-time codes officer. He’s worked Tuesdays, Thursdays and Fridays and occasionally, especially when he first came and had to learn about China, Wednesdays.

This spring, he said, the current town manager and selectboard decided the codes officer’s position should be full-time. Mitnik was not interested; this is a man who’s already retired twice, from the state Department of Environmental Protection and from the town of Manchester, and wants to keep on working without committing to 40 hours a week.

He therefore resigned, earlier than he had planned. He considers the town action “kind of like a breach of contract,” since he was hired for a part-time job, but instead of arguing found the Wayne position.

In Mitnik’s opinion, “You don’t need a full-time codes officer here [in China],” as his four years as a part-timer have demonstrated.

Mitnik’s full-time replacement was hired late in June, after two false starts. The first advertisements brought no qualified applicants (because, Mitnik believes, the salary offered was too low) and the first person hired left after two weeks. Now selectmen have hired William “Bill” Butler, another ex-DEP employee whom Mitnik commends as knowledgeable and experienced.

When he worked as a Department of Environmental Protection environmental engineer, Mitnik had “a technical job with tight deadlines.” Being a codes officer is harder, he said, because “You have to know so much more.”

A good codes officer, he said, has to be a psychologist and a policeman, able to be patient with the people who need and appreciate assistance and with critics.

One piece of his job that Mitnik has enjoyed in China but will give up in Wayne is applying MUBEC, the Maine Uniform Building and Energy Code. Under current law, MUBEC applies in municipalities with at least 4,000 residents; Wayne is too small. MUBEC requires inspections at different stages as a new building goes up. Some towns use third-party inspectors; Mitnik thinks having a town employee qualified as a building inspector is more effective and less expensive.

Builders receive a list of required inspections and are supposed to notify the inspector as they’re ready for each one. Where an out-of-town inspector might not follow up, Mitnik used a spread-sheet to keep track and remind builders.

The code authorizes inspectors to fine builders who neglect notification requirements and to make them tear down recent construction to reveal earlier work. Mitnik said he’d be unlikely to have something torn down, except maybe a deck built without a permit and illegally close to a water body.

Mitnik offered China officials and residents two pieces of advice on his way out: protect your water quality, and try to change China’s image as business-unfriendly.

Good water quality is vital all over Maine to keep up the tourism that supports the state’s economy. Mitnik recommends strict enforcement of shoreland ordinances, especially limits on development within 100 feet of a water body. He called China’s Phosphorus Control Ordinance “a great thing,” but pointed out that it is “badly outdated” and recommended an update, especially to add alternative techniques to control run-off instead of relying so heavily on buffer systems.

Mitnik said during his first year the planning board reviewed 18 business-related applications. Now it’s three or four a year. Yet, Mitnik said, in a state that’s considered too far from the rest of the country and too cold to attract big industries, small businesses are vital.

Townspeople “really should consider zoning,” he said, realizing his view is unpopular. If one deterrent to business is the NIMBY (not in my back yard) syndrome, zoning helps: it designates areas where commercial development is welcome and protects residential neighborhoods where business is not wanted.

With a zoning ordinance, “people are in a way losing rights,” but the town is “encouraging and controlling growth,” in Mitnik’s view. Wayne has had zoning since 1972, he added.