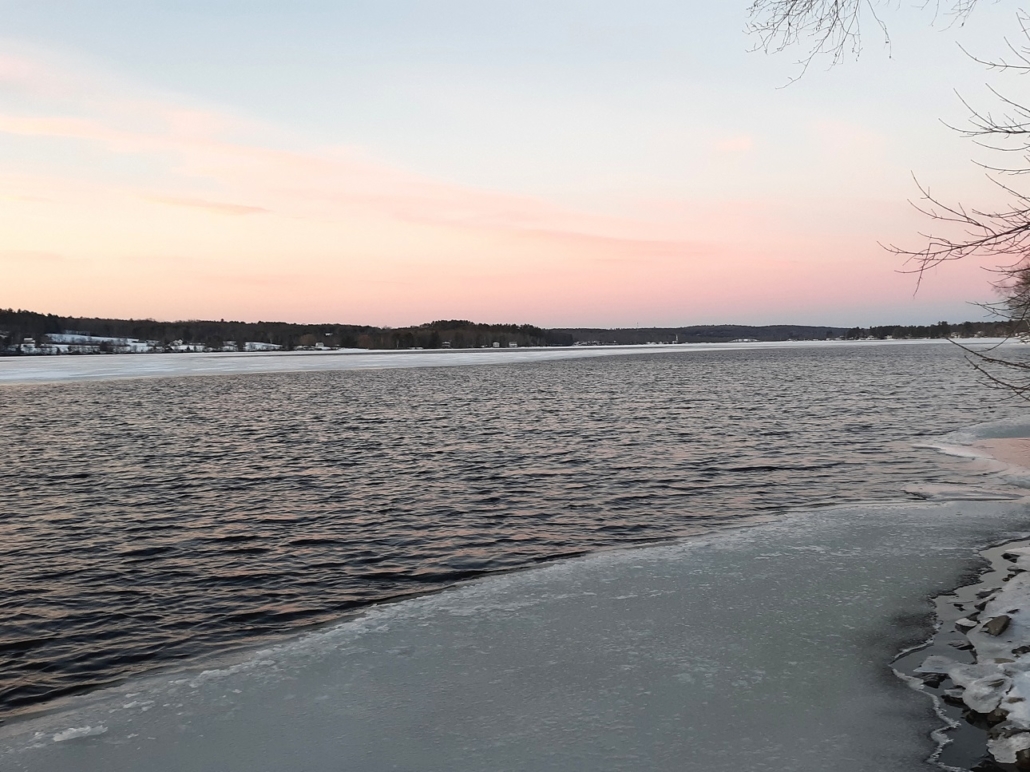 Many years, China Lake is frozen by mid-December. Former China Middle School teacher SueAnn Charles says she and her husband Harold, who live on the east shore, frequently went ice-skating during the after-Christmas school vacation.

Former resident Susanna Jacob lived year-round beside the lake until the early 1960s. She says her friend Theresa Plaisted, now 97 years old, used to skate by Thanksgiving; and one year when Jacob was in her teens, the two celebrated Christmas by skating from one end of the east basin to the other.

Jacob remembers one other time in this century, probably 10 or 12 years ago, when the lake didn’t freeze completely until Jan. 18.

On Dec. 19, O’Connor says, the lake was frozen. After the heavy rain on Christmas, there were two oval stretches of open water in mid-lake, one north and one south of Killdeer.

O’Connor says the north pond was smaller by Jan. 10 and both were frozen by Jan. 11, after a calm night when his thermometer recorded a low of seven degrees.

O’Connor explains that the wind keeps the water in the center of the lake from freezing, even when the air temperature is below 32 degrees. Ice forms when the water is cold and not moving.

China Lake’s example shows why people need to be careful about assuming any iced-over lake is safe to walk or snowmobile on. And given O’Connor’s evidence of two ice-in dates this winter, perhaps it explains why The Town Line runs an ice-out contest in the spring – for which Jacob sends in an annual guesstimate, though she lives 600 miles away – but no ice-in contest.

Retired Vassalboro fire chief recognized for 30 years of service Give Us Your Best Shot! for Thursday, January 14, 2021
Scroll to top