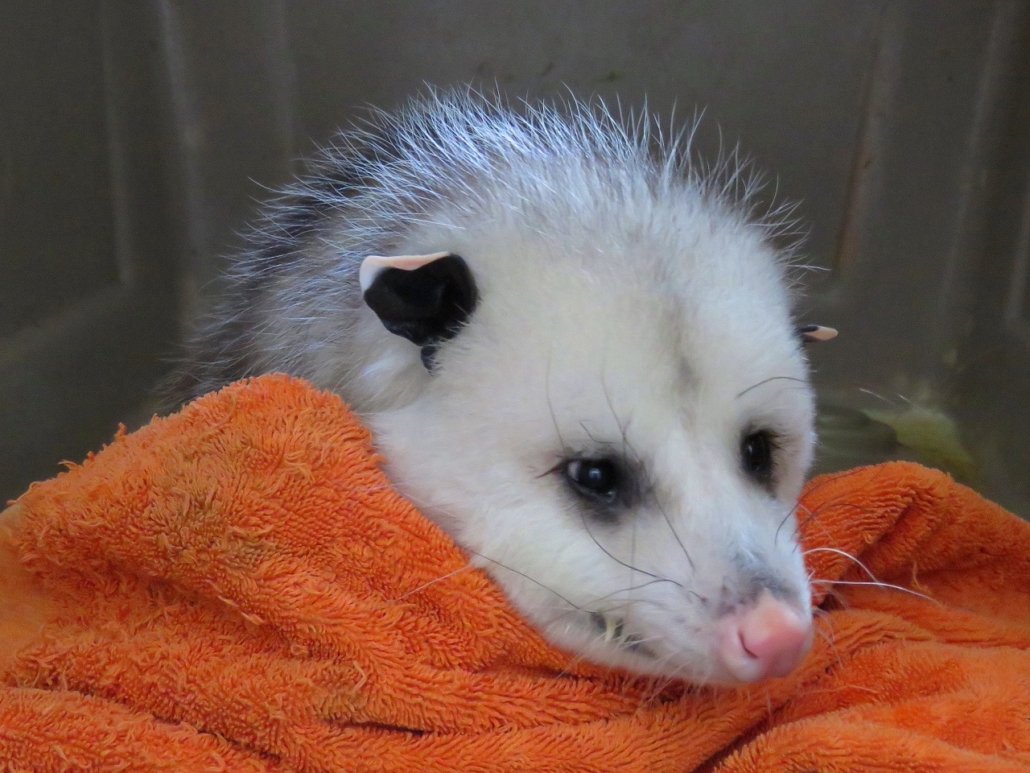 A recent chat with Donald Cote, at Duck Pond Rehab, was about opossums, as I couldn’t help but notice a large adult snoozing in a pet carrier in what used to be Carlene’s “doll room.” I’ve never seen one in the wild, although sightings in Maine have become common. My research provided conflicting information as to when they began to expand their range from the southeast, with one article stating they began to appear in New England about 300 years ago and another citing the early 1900s. Suffice it to say, they’ve been moving north and populations are becoming well established.

Don believes it’s possible they hitch rides at truck stops. Attracted to food in these areas, they can easily climb onto the truck frames, like mice and squirrels do under the hoods of vehicles. The vibration of the moving trucks scares the opossum so it stays put, eventually disembarking several hours and many miles later, often further north. They don’t hibernate and have no fur on their ears, tail or feet, which makes these parts susceptible to frostbite. However, Don thinks their bodies will eventually adjust to our cold temperatures. I wonder if their acclimation to living up north might be enhanced by our milder winters.

Opossum admissions to Duck Pond began sporadically about 10 years ago, but they’re now frequent residents for rehab. Last summer, a female with open wounds on both of her hind legs, was treated for several weeks. In addition to hands-on medical care, she was carefully monitored for infection which can be caused by flies/maggots. During her convalescence, she surprised everyone with a delivery of nine babies!

Although their appearance may resemble a rat, opossums are not rodents. In fact, they’re America’s only native marsupial and, like kangaroos, carry their young in a pouch. When babies are born, they’re so small 20 can be held in a teaspoon! Females usually have two litters a year of 8-10 young. Contrary to myth, a female opossum never carries her young on her tail.

Adults are the size of a house cat or small dog, about 2-1/2 feet in length, a third of which is the round, scaly tail. The head is conical and tapers to a long snout with a pink nose. The face is light gray to white; the fur from neck to rump is grayish white. They prefer to hunt at night when their vision is better and they can hide from predators, but will forage during the day if food is scarce or their nest has been disturbed. They have a prehensile tail to grasp tree limbs (they don’t hang upside down by their tails when sleeping), as well as opposable “thumbs.” They have 50 teeth – more than any other mammal.

Despite a popular belief that opossums are aggressive, they prefer to avoid confrontation. If threatened, they may hiss or bare their teeth, but bite only when defending themselves or their young. When extremely frightened, an opossum will go into a catatonic state; it will open its mouth, curl back its lips, and secrete a foul-smelling substance from its anal gland to mimic the smell of death. The term “playing ‘possum” comes from this ability to “play dead” and often a predator will walk away. Opossums have a high mortality rate at all ages; it’s estimated only 10 percent survive more than one year due to predation, exposure, starvation, vehicles, and shooting/trapping.

Their low body temperature and strong immune system make them resistant to diseases like rabies and Lyme disease, but they can’t avoid the dangers of habitat destruction, road development, and other kinds of human-wildlife conflict. They sometimes raid trash cans, pet food containers, birdseed, and grain, so these items should be stored inside the home, shed or garage. Opossums commonly use chimneys, attics, and spaces under houses, porches and sheds as den sites, so close potential entries with mesh hardware cloth, boards or metal flashing and seal holes in foundations.

These shy critters eliminate disease-carrying ticks and clean up our ecosystems by eating rotting plants and dead animals, as well as cockroaches, snails, slugs, grubs and small rodents. Opossums are nature’s pest control and essential clean-up crew. Did you know that one opossum can consume around 5,000 ticks in a single season?

Of concern for horse owners is a parasite carried by opossums that can cause equine myeloencephalitis, an infection of the central nervous system which results in dizziness, weakness and muscle spasm. Horses can ingest the parasite by eating grass or hay which has been contaminated by opossum feces. Unfortunately, it can live outside a host and remain infectious for as long as a year. The disease is treatable, but there’s no vaccine at this time. Proper storage of hay and feed, the control of “barn cats” and prompt disposal of animal carcasses are important deterrents. Don stated that he never releases opossums near farmland where horses are kept. He stressed that he respects and accommodates the wishes of property owners by releasing only those species they want on their property.

Donald Cote operates the Duck Pond Wildlife Care Center on Rte. 3 in Vassalboro. It is a non-profit federal and state permitted rehab facility which is supported by his own resources and outside donations. Mailing address: 1787 North Belfast Ave., Vassalboro ME 04989 TEL: (207) 445-4326. EMAIL: thewildlifecarecenter@gmail.com.