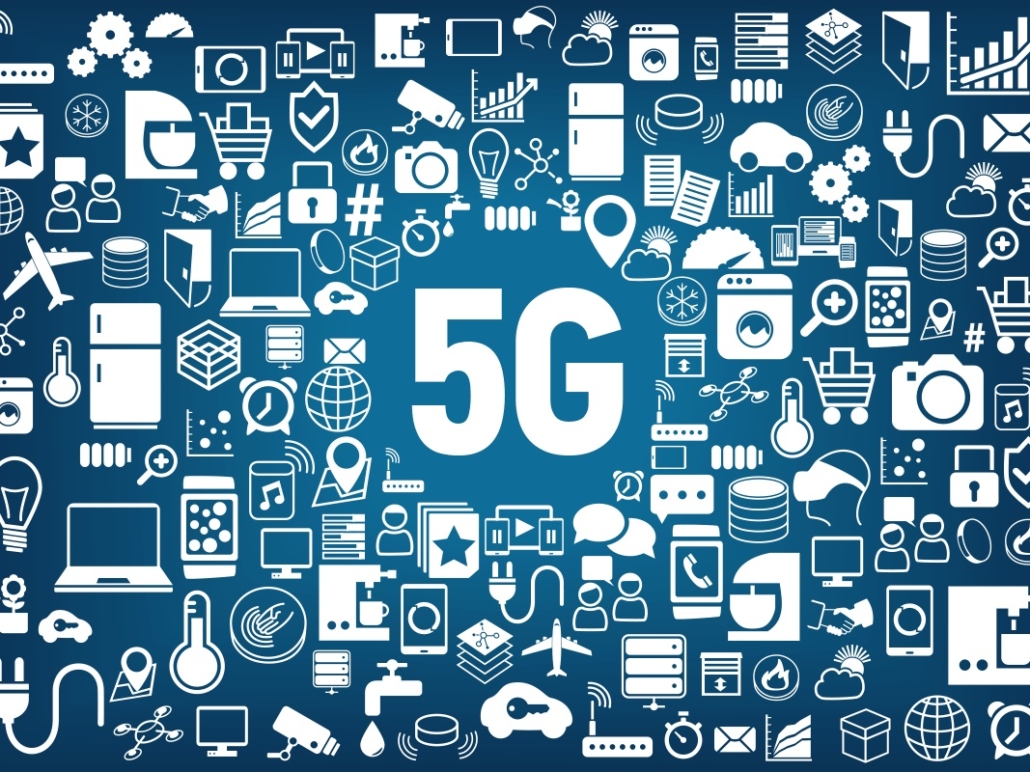 There’s a new wireless technology being rolled out this year that promises to be the biggest technological revolution since the invention of the cell phone. Dubbed 5G NR (“fifth generation new radio”), this isn’t just an upgrade to the existing 4G cellular network, but a radical reinvention of wireless technology that will require an enormous investment in new infrastructure, but also promises massive improvements in bandwidth, speed and latency.

This new cellular technology achieves these incredible improvements by making fundamental changes to the way cellular networks function. Whereas the old 4G technology used radio waves in the microwave band between 700 MHz and 3 GHz to communicate, 5G will tap into previously unused radio frequencies in ranges from 30 Ghz to 300 Ghz, known as millimeter bands. In addition, the new 5G technology will transmit across wider frequency channels of up to 400 Mhz, compared with 4G’s limit of only 20 Mhz.

Now, that may sound like a lot of technobabble, but it has real world implications, so let me explain.

A radio wave can be imagined as a wavy line traveling through space at the speed of light. Information is transmitted by manipulating the crests and valleys that make up that wavy line, much like the dots and dashes in Morse Code. The number of crests and valleys in a radio wave that pass a point in space in a specific amount of time determines the quantity of information transmitted. This is called the frequency of a radio wave. Since you can’t increase the speed at which a radio wave travels (it will always travel at the speed of light), the only way to increase information transfer is to increase the number of crests and valleys within a single radio wave. This is done by increasing its frequency. You can think of this as the difference between a wavy piece of string and a tightly coiled spring. While both the string and the spring are made from material of the same length, the spring will contain a greater number of crests and valleys and take up considerably less space. This is the basic concept behind the move in 5G to transmit using higher frequency radio waves.

Since the higher frequency radio waves of 5G technology are capable of transmitting a much greater amount of data than earlier microwave-based 4G technology, one can reasonably ask, why aren’t we using it already? The answer is simple. These high-frequency waves are much smaller, with their crests and valleys more tightly packed together, and therefore require receivers which are much more sensitive and difficult to manufacture. While such receivers have been available for military applications for a number of years, it has taken time for it to become cost effective to produce such receivers for wider commercial use. That time has now come.

The ability to fit more information into smaller transmissions, in addition to the use of wider frequency channels, means a hundredfold increase in data transfer times, and lower power consumption for devices.

However, there are also some significant downsides to using these higher frequencies. While millimeter waves can pack more information into a single broadcast, their shorter wavelength means they can also be easily blocked by obstacles in the environment and absorbed by atmospheric gases. Although the antennas needed to receive these transmissions will be much smaller than the giant cell towers in use today, we will need more of them because 5G antennas require line-of-sight in order to receive transmissions. Instead of cell towers every few miles, as we have for our current 4G/3G cellular network, hundreds of thousands of smaller antennas will have to be installed on office buildings, telephone poles and traffic lights.

This new 5G technology couldn’t have been implemented earlier because it requires the existing fourth generation infrastructure already in place in order to make up for these deficiencies.

While the new 5G technology has some real benefits to human user experience, like having enough bandwidth to stream 50 4K movies simultaneously, speeds that are 20 times greater than the average U.S. broadband connection, and the ability to download a high definition movie in less than a second, the real excitement lies in how this upgrade will benefit the machines in our lives.

A confluence of technologies ripening in the next few years are set to revolutionize our lives in a way that promises to be greater than the sum of the individual parts: this new, high-speed 5G cellular upgrade; artificial intelligence; and the rapidly widening world of the Internet of Things (IoT). These three technologies, each with astonishing potential on their own, will combine to change our lives in ways that we can only begin to imagine.

I have spent this article talking about 5G, and you have likely heard a bit about the emerging field of artificial intelligence, but the final item on this list, the Internet of Things, bears a bit of explaining. The Internet of Things is an industry buzzword referencing the increasing level of sophistication built into everyday appliances. Your car now routinely has cameras, GPS locators, accelerometers and other sensors installed in it. Soon nearly every electrical device in your house will be similarly equipped. In the future, when you run out of milk, your refrigerator will add milk to a list of needed items stored in the cloud. On your way to the grocery store, your home A.I. will send a message ahead of you and robots at the store will prepare a shopping cart with the requested items, which will be waiting for you when you arrive. Stepping through your front door after a long day at work, your phone will ping you with a list of recipes you can prepare for dinner based on the items you’ve recently purchased.

This is the Internet of Things. It’s every device in your life quietly communicating behind the scenes in order to make your life easier. Although this idea might seem a bit creepy at first, it’s coming whether you like it or not. According to statistics website Statista.com, there are currently more than 26 billion devices worldwide communicating in this way. By 2025, that number is expected to top 75 billion.

The upgrade to 5G, with its increases in speed and bandwidth, is not so much a benefit to us humans as it is an aid to the machines in our life. As more and more devices come on line and begin to communicate with each other, the demand for greater speed and bandwidth will increase exponentially. Soon the devices in your house will be using more bandwidth than you are.

There are also some significant security concerns arising from the need to build additional infrastructure to support the new 5G network. It will require the installation of billions of antennas and 5G modems across the world, in every town, city and government building. But who will build them? According to a February 2019 article in Wired magazine, “as of 2015, China was the leading producer of 23 of the 41 elements the British Geological Society believes are needed to ‘maintain our economy and lifestyle’ and had a lock on supplies of nine of the 10 elements judged to be at the highest risk of unavailability.” With this monopoly on the materials needed for high tech production, Chinese companies like Huawei, which is already the largest telecommunications manufacturer in the world, are set to corner the market on 5G equipment.

You may have heard of Huawei from the news recently, as the U.S. government has accused the company of everything from violating international sanctions to installing backdoors in the hardware they manufacture on behalf of the Chinese government. China’s second largest telecommunications company, ZTE, who is also looking to seize a piece of the emerging 5G pie, has been the subject of similar accusations, and last year paid more than $1.4 billion in fines for violating U.S. sanctions against Iran and North Korea.

Do we really want to build our communications infrastructure with equipment made by companies with close ties to the Chinese government? It’s a real concern for security experts in the U.S. and other western countries. Fortunately, European companies like Nokia and Ericsson, South Korea’s Samsung and California’s Cisco Systems are emerging as threats to this Chinese monopoly.

The new technology of 5G is set to revolutionize cellular communications in the next few years, but the real story is how the confluence of technologies like artificial intelligence and the Internet of Things, in combination with this upgrade in communications, will change our lives in ways we can’t possibly foresee. The 5G future will be glorious, exciting, and fraught with danger. Are you ready for it?

MESSING ABOUT IN THE MAINE WOODS: A real problem with someone in my life –... China resident Fred Wiand’s presidential campaign gets send off from supp...
Scroll to top