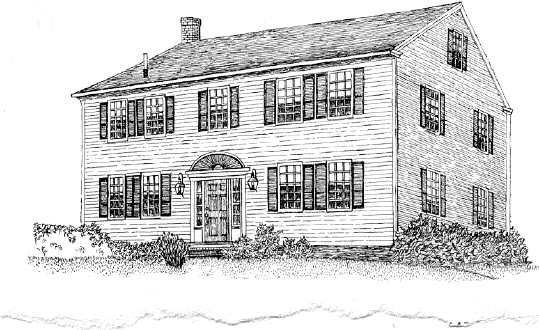 This story is completely fictional. Any resemblances to names of people and/or places is purely coincidental.

As the three were getting ready to go on their first exploration adventure of the house, Miri asked Jake if he had had a chance to find out about the builder and owner of the house.

“It took some digging but I did find a rich dude by the name of Jebediah Hodges who had the house built to his specifications. He got rich by investing in collier companies which were trains and canal barges that transported coal. Those investments paid off, making him quite wealthy. There wasn’t much about him other than the fact that he was rich, and helped a lot of local businesses stay on their feet in their early stages. Apparently he died due to injuries incurred in a big game hunting trip. I couldn’t find out anything more about the house or his family other than he married Emma Brithe. There was no mention of children.”

“Strange,” said Miri, “The entries of the diaries I’ve been reading mentioned those trips. It was a sad and lonely life for his wife. Their only child, a son by the name of Ian, was born with ailments that kept him frail throughout his childhood. I just got to an entry in the diary stating that he died at age twelve. It was tough on Emma because her husband was rarely around to help with the upbringing of a sickly child. Her life was deeply devoted to caring for him. She resented her husband for not being there and tended to imbibe in the spirits often. I think she blamed herself for her son’s illness because she drank so much while she was pregnant with him. From her writings I think what her son had was what we would call today, FAS, Fetal Alcohol Syndrome.”

The young couple shook their heads in sympathy for the original woman and child of this house. “Let’s get out of this slump and head upstairs. Attic here we come!”, said Jake.

The only one of the three who had been in the attic before was Dave when he was inspecting the house to make sure there were no leaks coming from the roof. The place was solid. Since it was only half a story tall the ceiling wasn’t as high as the other two floors and didn’t give much clearance for someone like Dave to walk around without bending his six-foot frame while Jake and Miri didn’t have too much of an issue since both were vertically challenged being less than five feet, five inches tall.

“It’s warm and musty up here,” said Miri. “I think that window can open and by the way don’t either of you think of changing it. I love that window.”

“Okie dokie, you’re the boss,” said Jake as he went to figure out how to open the window. “It pivots out from the bottom,” discovered Jake and swiveled it open on its hinge, allowing a comfortable breeze to enter the attic. Once the back window, which was a plain sash window, was opened the air in the attic wasn’t so musty. “There isn’t any lighting up here so we’ll have to do our exploring during daylight. Dave, any chance you can install a light or two up here and maybe a plug or two?”

“No problem.” Dave started to look where he could bring up the electrical wiring, while Jake and Miri started looking around the attic.

There were odd pieces of furniture, wooden boxes, and two large domed top steamer trunks. At one point, Jake jumped back, startled to see a large animal face peeking out from behind one of the dusty bureaus. “Whoa, what is that doing here?”

“Didn’t you say that the original owner of this house was a big game hunter and there used to be some of his trophies in this house?” answered Miri. “Maybe not all of them were removed and the head of that Wild Boar was put up here.” Hope we don’t find too many more of those trophies. Who do you think would want it so we can get rid of it?”

Once Jake’s nerves calmed down he said, “I’d like to bring it to school to show the students in Mr. Wilkinson’s history class and then see if the state museum would like it. I wonder what other exciting things we’ll find up here.”

They started going through drawers of some of the bureaus, finding very little; some pieces of clothing that dated back to the 1800s and apparently one of the bureaus was used in the dining room because table linens and silverware were found in the drawers. “We could probably find someone who would purchase some of the antiques that we won’t use and we can use the money toward the renovations,” suggested Miri.

“Sounds like a good idea, Ollie,” grinned Jake, referring to a famous old-time comedy team. He went over to one of the steamer trunks and brushed off the dust and cobwebs. “I wonder if it’s locked,” He said as he attempted to open it. At first he thought it was locked but apparently only stuck from being closed for so long. Once opened, the trunk revealed clothing made of heavy wool twill, which looked like something someone would wear when going hunting and lighter cotton clothing worn apparently for fishing. There were also some old rods with spools holding rotting fishing lines. “Well I guess Jebediah liked to fish too.” I can’t wait to show the history students some of this stuff!

“Ouch!” exclaimed Dave, who also was looking at the antique fishing gear.

“What happened,” asked Miri, hurrying to go to his side when she saw blood on Dave’s hand.

“I was moving some of this stuff aside and I caught my hand on some of the old fishing hooks that were stuck on a piece of cloth.”

“It’s a good thing you recently got your tetanus booster shot. Maybe we should go down to wash that out and bandage it.”

“I have a boo boo strip in my wallet,” motioned Dave as he took one out and put it over the injury. “We’re almost done up here anyway, so I can take care of it when we head back downstairs.”

Once they completed the investigation of the first trunk, Jake headed to the second. “Great! This one is locked. You didn’t happen to find a key in any of those drawers did you?” he asked Miri. She shook her head.

“I need something to pry the hasp open. Dave, do you have a screwdriver handy?”

“I never leave home without one,” chuckled Dave.

Once opened, Jake picked up a large piece of wool fabric which covered the contents of the trunk. “OMG! Miri, Dave, you gotta see this!” Jake cried out. Before them, within the trunk were small pieces of ivory, most likely from some of the animals that Mr. Hodges had bagged. They couldn’t believe what lay before their eyes. All types of small weapons from knives, to swords, and even guns. Jake was hesitant to pick any of them up, not wanting to damage any of them considering how old they were. “This, I believe, is a Bowie knife named after Jim Bowie who fought at the Alamo. This is a cavalry sword; I think a brass hilt saber.”

“Is that a Katana?” Pointed Dave to a beautiful sword from the Japanese medieval period. “How did the old guy get his hands on this?”