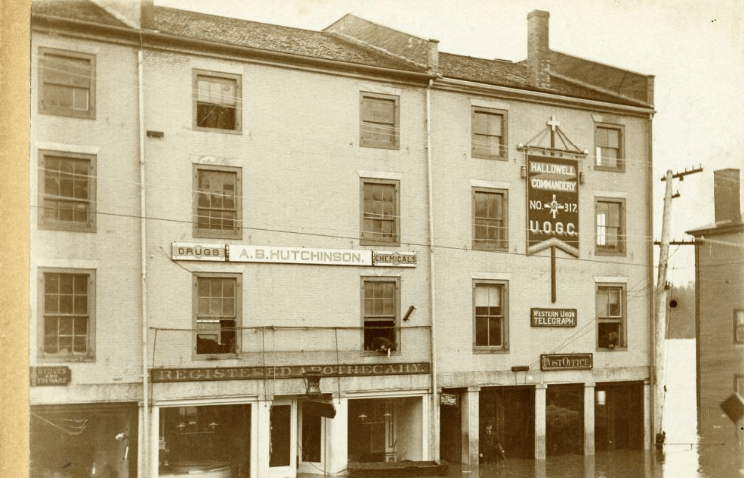 After the great freshet of 1832, with which last week’s article ended, Augusta business leaders went ahead with their plan to build a dam across the Kennebec River to power mills; and a Fairfield company dammed part of the river there.

The idea of an Augusta dam was by then about 50 years old. An early settler left a record predicting a dam in 1785, according to Augusta historian James North; and around 1818 Ephraim Ballard was quoted as saying he could build one for $25,000.

At the beginning of 1834, an Augusta group petitioned the Maine legislature to form a corporation to build a dam. Despite opponents’ concerns about effects on fishing, river transportation and upriver communities that might be flooded, a legislative majority created the Kennebec Dam Company in March 1834.

Work started in the spring of 1836. Expanded plans and time constraints meant the middle of the dam was left open through the winter of 1836-37; the ends survived freshets in November and December 1836 and April 1837.

In March 1837 the legislature renamed the dam company the Kennebec Locks and Canals Company and doubled the amount of capital stock it could issue, to $600,000. Work resumed in June; the 600-foot-long dam was closed Sept. 27; and the lock that allowed boats to pass opened Oct. 12, in a ceremony that was followed by a celebratory dinner.

In Fairfield, according to the Fairfield Historical Society’s bicentennial history, sometime between 1835 and 1840 the Fairfield Land and Mill Association dammed the west channel of the Kennebec between downtown Fairfield (then Kendall’s Mills) and Mill Island. “This earthen and timber dam had a short life as an [undated] unusual surge of high water washed it away.”

Its (undated) replacement a short distance downriver “was ingeniously unique in having a hinged bulkhead at its downstream end that swung open to release the pressure when the flow of water became excessive at flood stage.”

North described the solidity of the 1837 Augusta dam in detail, with illustrations, talking about ballasted timber cribs, thick planks, granite walls, cement, cast iron and iron strapping and similar substantial materials. The project used 800,000 cubic feet of granite, 2.5 million feet of timber and 25 tons of iron, and cost the full $300,000, he wrote.

The river continued to flow through a canal along each bank. North’s sketch shows the lock on the east end, between the dam and the canal.

A May 1838 freshet brought high water and giant logs that damaged the west bank, and a January 1839 windy rainstorm damaged it again (and covered Hallowell’s Water Street four feet deep in icy water). Nonetheless, Locks and Canals Company directors promptly started seeking proposals to build mills to use the water power, and by late May 1839 ten mills were almost built.

Then came, North wrote, “one of those catastrophes which mock at human foresight and defy human energy to resist.” After several days of rain, about 4 a.m. Friday, May 30, water began to go over the west side canal and through the damaged bank.

People “assembled in great numbers” to try to repair the leaks, but when the canal itself began to give way, they fled. The dam held; the river made a new channel about 500 feet wide around the west end, taking out two houses in the process (one, North said, was about a tenth of a mile from and 100 feet above the former shore).

An effort to blow up the mills to prevent their doing damage downstream failed, and one by one they were lifted off the dam, the last one floating away late Saturday afternoon.

Thus ended the first attempt to use the Kennebec to power Augusta industries. The dam stood blocking the river; the new channel was unnavigable; and during the summer of 1839 merchandise had to be unloaded from one boat and carried to another on the other side of the dam, “which was frequently piled high with various descriptions of goods in the process of transit.”

Businesspeople were annoyed. The company corporators had lost their investment. The legislature in March 1840 repealed the company charter effective Aug. 1, unless by then the corporators promised a rebuilt dam within two years.

North credited General Alfred Redington with saving the situation. Redington said if he were given a mill site, water power, “the materials of the old mills swept away in 1839” and as much money as people could come up with, he would build an improved dam and put a sawmill atop it.

(Although both North and Henry Kingsbury, in his chapter on manufacturing in his Kennebec County history, referred to “rebuilding” the dam, what they described as actually built was a 400-foot addition to the 600-foot dam, extending it across the new channel the river had carved on the west end.)

Another sawmill opened on the east end of the (original?) dam, and a machine shop, in 1842. In 1845 and 1846 there was a burst of expansion: cotton mills, a flour mill and half a dozen sawmills.

Kennebec floods tried the rebuilt dam repeatedly. On April 28, 1843, a “southeasterly storm” raised the river to within four feet of the 1832 level. Four and a half days of rain that began Friday evening, Oct. 31, 1845, brought more than four inches of water. Logs, lumber and remains of upriver buildings were carried on “a magnificent sheet [of water] of great depth” over the dam.

The dam was undamaged both times. North gave credit to the width of the “wasteway,” almost the entire width of the dam, and the way the road bridge just downstream narrowed the waterway to 440 feet, divided by the central bridge pier.

The remains of the Hallowell-Chelsea Crib bridge in 1870.

The result, he explained, was the water level below the dam rose faster than the level above it and the force diminished. Normally, the water below the dam would be about 15 feet lower than in the pond behind it; during the 1845 freshet the difference was reduced to five feet.

This flood damaged two Augusta wharves and swept away the basement framing for a new block of six sawmills.

The river breached the new dam at the end of March 1846, when several days of rain following a normal spring rise as snow melted brought down “floating ice…intermixed with logs.”

The rebuilding had left a stone pier (the west end of the original dam, 400 feet from the west shore) as a connector between old and new sections “rising like a tower unprotected above the top of the dam.” An ice cake knocked it down, and in following days the adjoining area washed away; by Saturday, April 11, 1846, there was a 150-foot opening.

Repair work started Monday, April 13, North wrote, and despite a couple more freshets was finished “in about ten weeks,” for about $13,000.

The next damage was from fire, not water: in September 1853 most of the industrial buildings on top of the dam burned. The dam was quickly “repaired, improved and strengthened.”

North wrote these repairs were tested by a major flood before the derricks used in the work had been taken away. An estimated five inches of rainfall between Friday evening, Oct. 12, and late Saturday, Oct. 13, raised the river level 21 feet by Sunday afternoon, “within eighteen inches of the highest point of the great freshet of 1832.”

The dam was unscathed.

The next major floods North described occurred in October 1869 and January and February 1870. The southeaster that began pouring rain on the Kennebec Valley Sunday morning, Oct. 3, 1869, was expected to be fairly harmless, because the river was low at the time; but it did major damage from Skowhegan south (and through much of New England).

Logs that lumber companies had harvested over the summer and left floating were carried downriver to create jams, notably one at Hallowell, that raised the water behind them. At Water­ville, the Ticonic toll bridge was torn from the banks and floated downriver.

(This bridge, Edwin Whittemore wrote in his Waterville centennial history, dated from 1835. It had been damaged in the 1855 flood and quickly repaired. After it washed out in October 1869, a new free bridge was built for $32,000, mostly paid by Waterville taxpayers; it opened Dec. 1, 1870.)

North wrote that to prevent the Ticonic bridge taking out Augusta’s railroad bridge, “A locomotive was despatched with ropes and a crew of men, who met it in Vassalborough and fastened it to the shore.” The part that came loose and went over the dam was not solid enough to do damage.

This October 1869 freshet damaged warehouses on Augusta wharves and swept away piles of logs and lumber.

The following months, North wrote, were “generally mild,” but with occasional cold spells that froze the river to a considerable depth. After Christmas came another warm spell “which started the buds on trees in favorable exposures” and was followed by rain on Jan. 3, 1870.

The rain caused a freshet; the freshet broke up the ice over rapids in the Vassalboro area; the ice came down and jammed above unbroken ice in Augusta, Hallowell and Gardiner. In Hallowell and Gardiner, North wrote, water started backing up during the night; town officials had bells rung to notify Water Street business owners to rescue merchandise from their basements.

A cold spell added more ice to the jams. From Feb. 18 through 20, 1870, rain and wind moved more ice downstream, until, North wrote, the river was one continuous thickly-layered jam from near the Kennebec Arsenal (on the east bank a bit downriver from old Fort Western) to Hallowell. In places the ice-layers were 15 feet thick; in places they rested on the river bed.

This barrier made the river rise six feet in 30 minutes, until the water levels were equal above and below the Augusta dam. “The dam was completely flowed out, a slight ripple only marking its place,” North wrote.

He described in detail – probably from personal observation – 175 feet of the wooden railroad bridge (built in 1857, according to Charles Nash’s chapter in Kingsbury’s history) breaking away, turning upside down from the weight of the track on top and floating toward the already damaged road bridge, “a huge battering ram.”

When the upside-down floating bridge crashed into the stationary one, one end dipped under and came up on the downriver side, leaving 20-foot-long “legs” sticking up on either side. The mass wriggled until it bounced out and continued downriver, to the “joyous shouts and cheers of many anxious spectators.”

Nash wrote that 160 feet of the Augusta dam went down the river, and commented this was the fourth major damage since 1837. The dam was rebuilt “in a more elaborate and expensive manner than ever before” by the end of 1870; the road bridge was repaired; and a new iron railroad bridge was built “immediately.”

In Hallowell, North wrote, the bridge was carried away and some stores were moved from the east (river) side of Water Street to the west side. An on-line source estimated damage at more than $1 million, including loss of two bridges (road and railroad) and walls torn off buildings by the ice.

This 1870 freshet, North wrote as he concluded his history of Augusta, was the fiercest yet; the water level was two feet higher than in 1832.