Following an 11-year span when he lived in New York and California, Anson Biller, of China, yearned to return to the northeast, where he had moved from after growing up in Massachusetts.

Last year, he purchased the former Dutton Pond Farm at 154 Dutton Road, about one-and-a-half miles from the northeast corner of China Lake. He renamed the location Full Fork and began his endeavor.

His path to vegetable farming wasn’t exactly a straight shot. He was initially pulled into it through an after-school youth education program in which one of his jobs was teaching children the ins-and-outs of growing vegetables. An after school program led him to take on living at and producing food for the kitchen at a retreat center for two-and-a-half years, then to running s small CSA and U-pick farm at an environmental education center north of San Francisco for another two-and-a-half years. 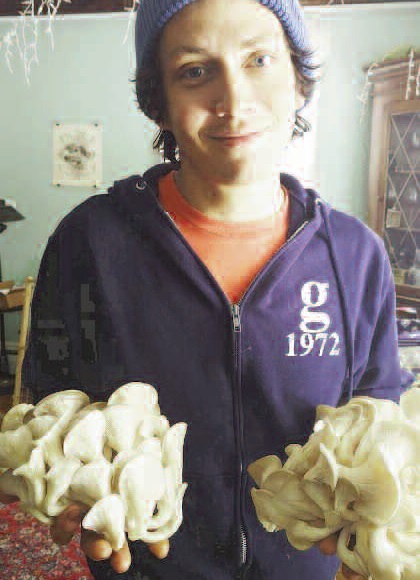 He missed the northeast and the sense of home that comes from being around the trees and animals.

“I missed the seasonal changes and the comfort of knowing a space by virtue of having grown up within it. The environments of California are fascinating, but they weren’t home. So two years ago I moved back,” said Anson.

“I spent my first year in Maine working on a sheep farm in Whitefield,” he continued, “building up 10-acres worth of paddock fencing, pruning it’s one-acre apple orchard, and helping to build its barn – while searching for the right space to start Full Fork. That spot was here in China, and the farm is now entering into its second growing season.”

There are no other family members involved in the farm, and he lives on the land in the old farmhouse with six other people.

“We hang out, cook and share meals together,” he states, “put energy into a small home garden. A lot of us are also involved in farming in some way, too, so are also bringing home food from our work.”

They have chickens, Silver Appleyard ducks, and weeder geese, one house rabbit and an Australian shepherd pup from a local breeder. “It’s a full house, but it’s a big house,” he adds, “and while I can definitely understand how it wouldn’t be a living situation that is for everyone, it really works for us to live in community with one another.”

“Full Fork being my project on the land, I’m grateful to come indoors at the end of a long work day in the field and be able to spend time with my partner and friends,” Anson states.

What else does he do besides farming?

“I’ve been playing fingerstyle acoustic guitar now for 13 years,” he says, “and mix and dabble with a handful of others. Farming has taken me away from it to a large extent, but I also love to camp and travel by bicycle (a little travel guitar strapped to my bike rack).”

His bicycling started off with a trip riding from Boston to San Fransisco and he has been hooked since. He’s done it for work, leading high schoolers up to Montréal from New York City. He has biked down California’s coast to Monterrey for a farm conference once. “You experience a lot more than driving by car, and have a lot more opportunities to meet and talk with people,” he remembers.

An exciting piece of news that he only just learned about is the Sustainable Agriculture Research & Education (SARE) grant for which he received approval.

SARE is a part of the USDA that awards research grants to farmers seeking to test an innovative idea in the field. These can run the gamut, but the idea is that these research projects meant to aid farmers are best carried out by other farmers. He applied last fall and was awarded an $11,000 grant to study the use of spent brewers’ grains as a field amendment in vegetable production.

To start, spent brewers’ grain is the major byproduct of beer production. It is what’s leftover after what’s called the masher steeps the grain and malt in hot water and converts the grains’ starches into fermentable sugars. To breweries, it’s a waste product. To farmers, it has the potential of significantly increasing a field’s organic matter. 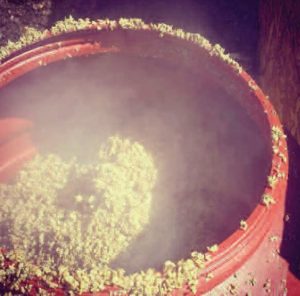 Spent brewers’ grain has a long history of use as a feed supplement for pigs and cows, but presents challenges for vegetable farmers. It emerges from the masher essentially pasteurized – in other words, with few living microorganisms – with both high nitrogen and moisture content. All in all, a great breeding ground for negative anaerobic decomposition. If you have a compost pile at home you might be familiar with that type of anaerobic decomposition when your compost pile smells foul because its too wet.

The purpose of his study is to take the spent brewers’ grain and put them through a special composting process called bokashi. In simple terms, bokashi is a form of a beneficial anaerobic decomposition that utilizes the same bacteria used to make sauerkraut. Rather than trying to work against the high moisture content of the spent brewers’ grains, the idea is to work with it. “I’m getting my spent brewers’ grains from Oxbow Brewery, in Newcastle,” Anson said. “They’ll be inoculated in airtight 55-gallon drums, fermented for two weeks, then tilled into the soil in the field.” Over the coming year, he will be monitoring the effect the spent brewers’ grain has on growth and yield of Full Fork Farm’s main crops.

Full Fork’s primary focus is the salad plate. They grow baby salad mixes, arugula, spinach, and specialty greens for restaurant and wholesale – including the local grocery store and hospital – as well as herbs, garnishes, and tomatoes. The farm also has a half-acre u-pick strawberry patch that opens in June and an on-site roadside market stand with a smattering of other produce beyond greens like garlic, duck eggs, beets, kale, oyster mushrooms, and husk cherries.

“In the short term, we’re working to finish establishing our permanent beds and irrigation system this season,” he states. Having farmed in California for six years, last season’s drought wasn’t something unaccustomed but it did present challenges for direct-seeding crops. Linking an irrigation system to the well they had drilled last year will help ensure they have the water needed.

They’re also moving toward year round greens production. The farm is starting out modestly, but the hope is to become known throughout the region for their salad mixes.

On the longer term, they’re just planting the gamut of perennial fruits, nuts, and support species on the land. “I grafted about 35 heritage apple trees this month and propagated about 200+ plants from cuttings and seeds,” he adds. This was helped in great part through support of neighbors, local organizations, and friends. He’s not quite sure how it might manifest, but looking forward to the years they can offer the fruit back to the community.

The farm will also provide produce for the public.

The u-pick strawberry patch and market stand are great ways to support the farm directly, and you can find their produce at Uncle Dean’s Good Groceries and several restaurants in Waterville, locally. He also works through a couple distributors, too, so the produce is already making it down to Portland and up to Bangor, along the coast, and out to the Carabassett Valley. 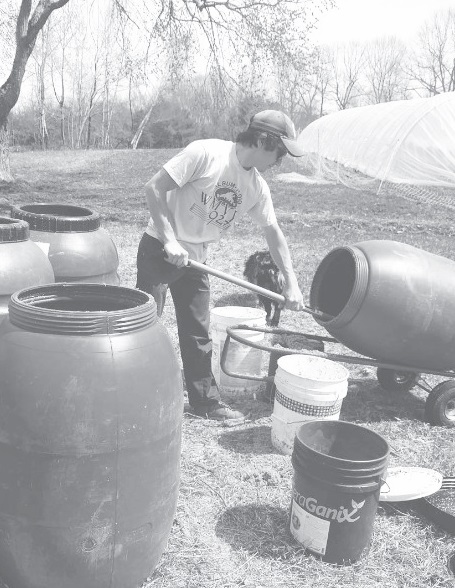 Why take on such a huge commitment?

“Well, in a narrow view, I believe that spent brewers’ grains will be good for my soil, for my crops, and for the farm’s growth overall,” he explains. “In a greater sense, I’m interested in taking on this project out of a commitment to mitigating the effects of climate change through my work. There’s a good understanding of human-related activities on climate change as it relates to fossil fuels, but less focus on agriculture’s contribution, which accounts for nine percent of CO2 emissions in the U.S. Farming though, in my opinion, offers the very best storage space for carbon: back into the soil. This is the concept of carbon sequestration.” The fact is that, even if as an individual a farmer remains skeptical about climate change, they’re unlikely to deny that building putting carbon into the soil and building soil’s organic matter is good for a farm. The ability for farms to partner with the burgeoning craft brew market both in the state and in the country presents an excellent, free source of organic matter that can play a part in sequestering carbon in the atmosphere back into our soils. According to the Brewers’ Association, this number has more than doubled nationally to 5,300 since 2012.

To find out info about it online, the farm’s website is www.fullforkfarm.com.