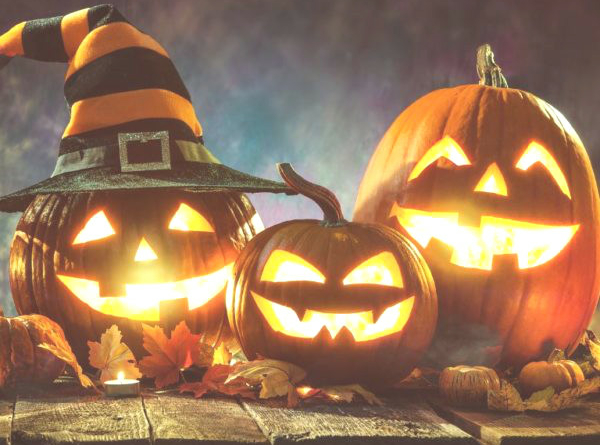 Halloween began approximately 2,000 years ago in the areas which are now Ireland, United Kingdom and part of France. The people who lived in these areas were known as Celts. The people of this time celebrated their new year on the first of November. Summer and fall was finished and the time designated as winter began. Winter was a cold dark time of year as you can imagine. There was no electricity for lights of any kind. The Celts were a people of very deep superstition. The night before New Year was feared with great reverence. The Celts believed that on October 31 the hours before the New Year (November 1), that a neutral area occurred and during this time, the living and the dead became blurred.

October 31 was celebrated as Samhain (sow-in). It was believed that the ghosts of the dead returned to earth. A tremendous amount of calamity occurred with this event. Problems with crops and other dastardly things would occur.

During this time, Celtic priests known as Druids were able to make predictions regarding the future. These predictions made by the priests generally gave comfort and offered direction to a world without good direction and purpose. The Druids would build great bonfires where the people would gather and burn crops and animals as sacrifices to the Celtic deities. You can imagine what a frightful show this would be with the locals dressed in costumes made from skins, bones and heads. At this time everyone tried to be a seer and read others’ fortunes. When this event was concluded they re-lit their household fires using torches from the bonfire. This would help protect them from the cold long winter, and offered an amount of protection from other things.

By 43 AD, the Roman Empire had conquered the Celts. For approximately 400 years the Romans ruled and combined two festivals of Roman origin with the traditional Celtic Samhain festival. The Roman Festival of Feralia, Roman passing of the dead and Pomona, which was the honoring of the Roman Goddess of fruit and trees. The symbol for Pomona is the apple, thus the tradition of bobbing for apples, which we use at Halloween.

In approximately 609 AD, Pope Boniface II dedicated the Pantheon in Rome in honor of the now Christian Martyrs. Pope Gregory III later moved the observance to November 1. From Halloween the name went to All Hallows’ Eve, which is the day before All Saints Day. Some countries, such being the case in the South Pacific, call this particular holiday All Saints Day ( November 1). In this part of the world, this holiday is literally celebrated religiously. People will camp out on loved ones’ graves for the night and eat, drink and sing. Something that I found interesting is the living bring the dead gifts of their favorite things that they enjoyed in life; from a cigarette and beer to a candy bar. These items are left at the graveside.

In the USA, the Irish put energy into this holiday with “Trick or Treat” and pumpkin carving, etc. Of course, throughout history costumes were always part of these holidays.

In the 1920s and 1930s Halloween here was not so cool. Actually, at times it was downright dangerous. There were break-ins and vandalism, as well as other sorted misdeeds. As time progressed we accepted the holiday as a fun time for children. Today we tend to lean toward private parties so as to protect our children. Just as much fun can be obtained by a well organized Halloween event and it is far safer and can be enjoyed by young and old alike. We kids tend to allow more freedom to older people than in the past. They usually spend most of their time in another room, anyway. So, have a happy and safe Halloween. Enjoy yourselves and God Bless! Happy holiday from us to you.