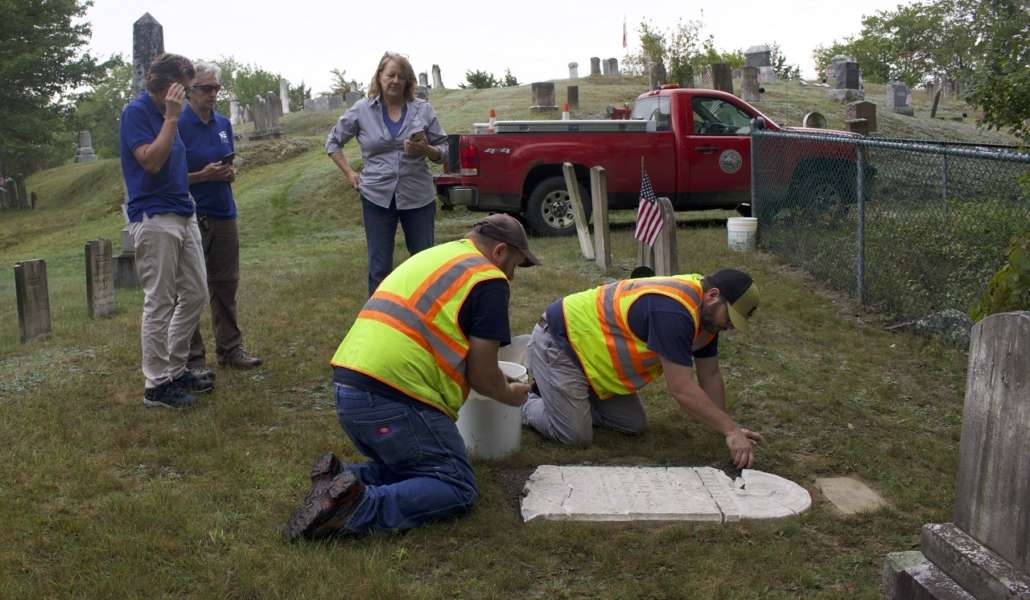 The bell tolled from the church at the head of the lake just as Margaret B. Ayer’s headstone was finally laid back into place again at the China Village Cemetery. Cindy Gagnon, of the Daughters of the American Revolution remarked, “Well did you hear the bell ringing? How appropriate. It says Margaret’s family appreciates she’s back now and they are complete again.”

Cindy Gagnon and Joyce Wyand are both members of the Daughters of the American Revolution (DAR) and share a passion for cemetery restoration. They were made aware that Margaret B. Ayer’s headstone was in the basement of the L.C. Bates Museum, at the Good-Will Hinckley campus in Fairfield. Gagnon went to the museum on her own to investigate and mentioned that a dark museum basement is not a place you want to be alone. She felt it was a bit unnerving to be among the taxidermy animals, fossils and bones. Yet there, she not only found Margaret’s headstone; she found quite a few mysteries as well.

First off, why had Margaret’s headstone been in the basement of the museum for decades? Who had brought it there? Why was the headstone broken into pieces? Who had tried to repair the headstone. The pieces of the headstone were fitted back together like a puzzle, plastered onto a plywood board for support, and the face of the stone was carefully cleaned to restore its original brightness. These questions still remain a mystery.

The two members of the DAR, Gagnon and Wyand, researched where the headstone belonged and determined Margaret’s final resting place was in the China Village Cemetery, located at 13 Causeway Road. There was an existing small stone on her plot. Her parents, Edward Breck and Roxanna Dean Breck and her brothers, Edward Jr. and Samuel, were also buried in China Village Cemetery.

In her investigation, Gagnon found out that Margaret’s early death at age 41 was one of a long spell of tragic events in her husband’s life at the time. George Washington Ayer, Margaret’s husband, enlisted to fight in the Civil War as a 38-year-old father. He was mustered into the 18th Massachusetts Infantry on October 12, 1861 as a private in Company A.

While on detached service as a waggoneer at 1st Brigade Headquarters, Fifth Corps, he was crushed by a mule at Harrison’s Landing, Virginia. George was treated for his injuries for a five week period and reassigned, due to his condition, as a clerk at First Division, Fifth Corps Headquarters. In the summer of 1864, George contracted typhoid fever while waiting to be mustered out of his three year enlistment, encamped at Arlington Heights, Virginia. George fulfilled his enlistment responsibilities and was discharged in October 1864 with long lasting effects of his illness and injuries. Not long after he returned home, Margaret passed away in August 1,1865, leaving George and three children – Charles, George E. and Mary. No cause of death was listed on her death certificate. George Washington Ayer lived until 1890 and was buried in Oakland.

Gagnon remarked that Margaret had a tough life as well, “Margaret lost her mom when she was 14, her dad when she was 17, and her brother died in the Civil War just before she died.”

Gagnon and Wyan were unable to locate any of Margaret’s living relatives so they contacted Julie Finley, Deputy Clerk of the Town of China to find out the protocol to return the headstone to its rightful placement in the cemetery. Ross and Shawn Reed, Director of Public Services, organized the physical placement of the headstone with assistance of Josh Ross. It was laid flat to the ground due to the condition of the stone and surrounded by crushed stone to hold it in place. A layer of fine sand was used to fill in the cracks of the repaired stone.

While there was no official ceremony, there was a collective feeling of success and quiet jubilation from all who were present at 9 a.m. when the church bell rang because an artifact was returned after a long absence, although we still don’t know why it disappeared. This symbolic act rejoined a family post-mortem with the respect they deserved, and that is something worth celebrating.

We are still looking for living relatives of Margaret B. Ayers to tell them about this story. So look on your family tree and see if her branch belongs to your tree and contact us at The Town Line newspaper.

CORRECTION: The print edition of this story referred to Jason Finley, but the correct name is Josh Ross. This has been updated.