“Hello! Do you have a few minutes to talk this evening?”

It was a vivacious young lady. But something was off. I couldn’t put my finger on it. “What is this about?” I asked rudely. Vivacious or not, I was a repeat victim of dinner-time telemarketers.

It was the ‘um’ that did it. It didn’t sound natural. It sounded like someone had written ‘um’ into their script in order to trick me into thinking I was speaking to a real person.

“Are you a recording?” I said abruptly, in the middle of her spiel.

The lady’s voice broke off in mid-word. “Yes.” The answer came back immediately.

I hung up the phone with a little chill that traveled up my spine and prickled the hairs on the back of my neck. There is something slightly disturbing about thinking you are speaking to a living, breathing human being only to find out it was a computer instead. 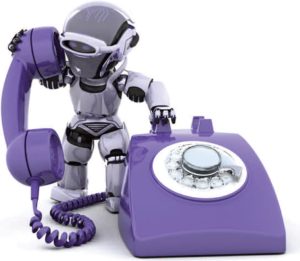 And it got me thinking. Is there any law on the books requiring an Artificial Intelligence to tell you it is an artificial intelligence? After a bit of research, I found an article Time magazine published in 2013 detailing their encounter with a “robot telemarketer” named Samantha West that had refused to admit she wasn’t real.

That was in 2013. There have been major advances since then. Apple just had its World Wide Developers Conference where they announced a new voice technology for their computer assistant Siri. It leverages new advances in machine learning to create a computer-generated voice that is indistinguishable from the real thing. This isn’t a computer awkwardly parsing together pre-recorded words of a real human being. This is a voice generated on the fly by a computer that sounds as natural as yours or mine.

In fact, several companies, including Google, are using machine learning and advanced algorithmic programming to develop technologies that allow them to simulate real voices using as little as 60 seconds of data. In other words, feed in 60 seconds of dialog from George Clooney’s latest movie, and you’ll be able to make ole Georgie say anything else you like.

This means that soon you won’t be buying an audiobook read by the actress Meryl Streep. Instead Ms. Streep will simply license her voice and you’ll be listening to a simulation of Meryl Streep reading the book. And you won’t have famous actors doing voice-overs for the latest animated Pixar flick, rather you’ll be watching a movie with characters voiced by a computer simulating famous actors.

But don’t worry, you probably won’t even know the difference! That’s how good the technology has become. The upside is that actors will be able to lend their voices long after they are dead and buried. The downside is not knowing if that is creepy or cool?

But combine this new voice synthesis technology with recent developments in artificial intelligence and you start to have a combination that sounds ripe for abuse.

Think telemarketers are bad now? What happens when companies no longer need to hire real humans to make the calls?

In fact, it’s likely that you have already had a conversation with an artificial intelligence and not even known it. If you’ve ever gone online to “chat” with technical support, there is a good chance you were speaking with a chatbot and not a real person.

Chatbots are artificial intelligence-driven conversation generators that simulate real human interaction. There are online chatbots designed to be your girlfriend (Julie), your psychiatrist (ELIZA), your doctor (Dr. A.I.), technical support assistants and many other things. Since 1991, there is even an annual award, the Loebner Prize, given out to the best chatbot.

Siri and Google Assistant are both based on research into chatbots. The technology to create an artificial intelligence that can carry on human-like conversations has long been in development, but it’s only recently started to be used in mainstream electronics like Amazon’s Echo or Apple’s just announced Homepod.

Personally, the idea of speaking to a computer doesn’t bother me. But a computer that uses “um” in an effort to make me think it’s human? That’s disconcerting.

Eric W. Austin is a real, live human being. Or is he? To find out, email him at ericwaustin@gmail.com or leave a comment on this article at townline.org.