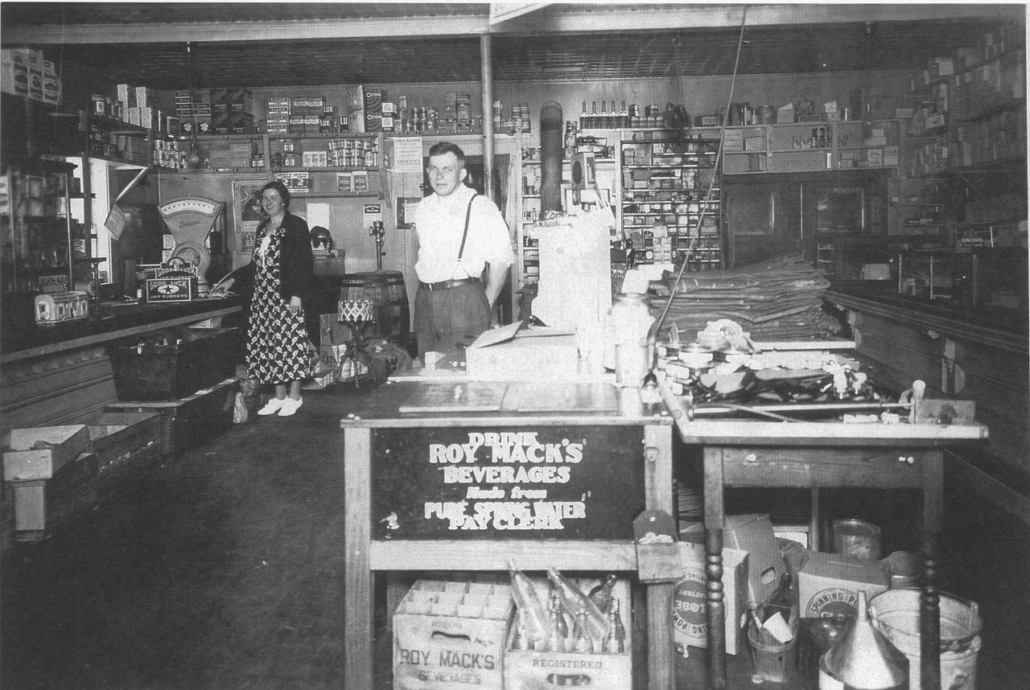 It was the late 1960s and Elwin Hussey was sleeping on the floor of Hussey’s General Store, armed with a shotgun. Frustrated with the lack of progress by police after a spate of recent break-ins, Hussey decided to take matters into his own hands. He began driving home in the evenings and walking back up to the store in an effort to catch the perpetrators in the act.

“I was sleeping right inside the door,” he remembers, “and I had a shotgun.” On the second or third night of this routine, a rattling at the front door woke him from his uncomfortable slumber. The burglars were attempting another break-in.

Backing into the shadows, Hussey watched as two dark figures snapped the door lock and entered the store.

“I saw them come in — one, two,” he says. “It looked to me like they had something tucked into their pants pocket, which I assumed was a gun.”

Only later did Hussey learn that it was not a gun tucked into the perp’s pants but the tire iron they had just used to jimmy the door.

As the burglars headed to the cash register to collect their illicit loot, Hussey slipped silently out of the store. “I didn’t know exactly how to go at it,” he admits. “I ran across the street and pounded on the door and told the people in the house to call the police.”

After waking the neighbors, Hussey sprinted back across the road to save his store from being burglarized. “I had the shotgun in my hand,” he recalls. “I just sat out there and waited until one of them showed up.”

Not knowing exactly what he was dealing with, and thinking he had seen the glint of a firearm tucked into the pants pocket of at least one of the perpetrators, Hussey was understandably tense. When a dark figure exited the store through the broken front door, he raised the shotgun and shouted, “Come out here! Come out!”

The alleged criminal did not comply. “He turned around and started running down the hill,” Hussey says, “so I shot him.”

The birdshot blast caught the looter in the leg and he collapsed in the parking lot. Not long after, the Four Corners, in Windsor, buzzed with activity as half a dozen police cruisers pulled up to the scene. 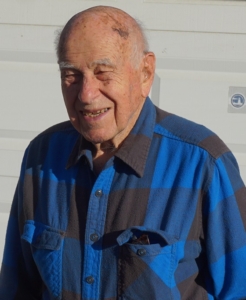 Elwin Hussey, 98, is pictured outside his home in Windsor. (photo by Eric W. Austin)

“It ended up that night cost me five thousand dollars,” Hussey laments. The police, he says, “let the guy lay there about an hour and a half before they called an ambulance to take him to the hospital.” The wounded wrongdoer later sued Hussey for excessive use of force.

Police searched the premises and discovered the second trespasser hiding upstairs in the bridal department. Firearms were also found in the suspects’ vehicle.

Hussey’s General Store was already a Windsor institution at this point in the 1960s. It had been established in 1923 by Elwin’s father, Harland, the same year that Elwin was born.

At that time, Harland B. Hussey owned a Durant Motors and Star automobile dealership and Texaco pump station in Windsor. There had been an existing business where Hussey’s General Store is now located, called the Dutton Store. Initially operated by H.A.N. Dutton in the early 1900s, it was later sold to Harry Pinkham. The Pinkhams and Husseys were cousins. In 1923, the Dutton Store burned down, and Pinkham decided they would not rebuild. Upon learning this, Harland purchased the lot adjacent to the old store on the north side of Route 105. On this lot was a stable which he converted to serve as a new storefront. As business grew, a 16-foot extension was added in 1940 and an additional 50-foot expansion in 1947.

In 1954, the Hussey family built the new store where the old Dutton Store had stood 31 years earlier before it burned. The old store, which had started out as a stable, was retired to serve as a warehouse and is still standing today.

Elwin Hussey grew up with the store, and started helping his parents at the age of seven or eight. In the early years of the store, says Hussey, there might be only 10 or 12 customers a day, and they were mostly looking for one of two items.

“It seems to me, about every other one would come in with a jug,” Hussey says. “We would guess whether they were after molasses or vinegar. It was always one or the other.”

Grain and fertilizer were also a big part of daily business. The grain arrived at the store packed in 100-pound cloth bags made of muslin, and these bags became a coveted commodity for local ladies who would turn them into dresses. Suppliers soon caught on to their popularity and began to produce the muslin bags in a variety of patterns and colors.

Working at the store wasn’t the only job Elwin Hussey had growing up. He had a paper route, too. “I was about 12,” he recalls. “I would get up Sunday morning, harness the horse and deliver Sunday papers.” He had about 8-10 customers. “The papers sold for 12 cents,” he says with a chuckle. “I made two cents apiece on them.”

After attending Erskine Academy, in South China, Hussey headed to Colby College, in Waterville, where he majored in chemistry and graduated as the school’s youngest ever graduate at the age of 19. “It was war time,” says Hussey. “The reason I graduated at 19 was because of the war.”

In the self-penned essay, Remembrances of 1940, Hussey explains further: “I ended up with two major warnings and two minor warnings that first semester,” he writes. “However, I buckled down and made the dean’s list the following years. By taking extra courses, attending one summer school and getting a three month deferment from the draft, I was able to graduate in three years at the age of nineteen. My graduation in 1943 was the second one at the chapel on the new campus, Mayflower Hill. The first one was in December 1942 for those seniors that attended that summer session. At this time, the only other building there was a women’s dormitory. Colby, when I attended, was on the bank of the Kennebec. All those eight or nine huge buildings of the old campus are gone forever.”

After graduation, Hussey entered military service where he served two and a half years with the U.S. Navy in World War II. There he trained as a radar and radio technician, skills which would serve him well upon returning home.

“Basically, my interest was radios first,” he recalls, “and then [radio company] Philco went into the appliance business about the time TV started out, maybe in 1951?”

For a while Hussey maintained a radio and appliance repair shop in the back of the original store. Later, they did a robust business selling TVs. He remembers the store had a trailer they would haul to the homes of prospective customers. The trailer was a portable antennae that unfolded and could be deployed in a customer’s driveway. This gave customers a chance to try out the new technology before committing to a purchase. 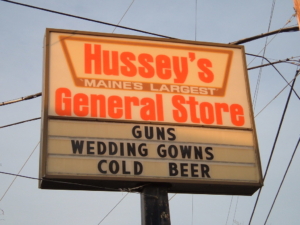 One of the unique features for which Hussey’s General Store is famous across the state of Maine is its formal wear department.
“As we’ve traveled around Maine,” says Elwin Hussey, “more so than anything else, people have said, ‘We bought our wedding dress there.’”

The store began carrying formal wear, in a department dubbed the “Terrace Room,” about the time the new store was completed in 1954. Elwin Hussey’s daughter, Roxanne, who spent more than 25 years working in the store, remembers how it all started.

“This was in the days before specialty shops and malls,” she says. “A lot of women were having difficulty finding gowns and formal wear for many of the events that were planned. I think that’s how it began.”

Speaking of her grandmother, Mildred Hussey, who was involved with the social scene in Augusta, Roxanne recalls, “She started with formal dresses and the bridal [department] got added into that because it’s very similar. There weren’t a lot of places in the state that had nearly the selection that Hussey’s did back in the ‘50s and ‘60s. Ladies would come from all over the state to get gowns.”

For years, Hussey’s General Store has been known far and wide for their broad selection and friendly service. Roxanne says the family’s intent has always been “to keep it a humble country business that had all the things local folks needed.”

When the first shopping center in Augusta was being built, Elwin Hussey recalls his father, Harland, being asked if he was worried about the new competition. “There will always be customers that want to go to one place where they can buy a pound of hamburger and a pound of nails,” he responded.