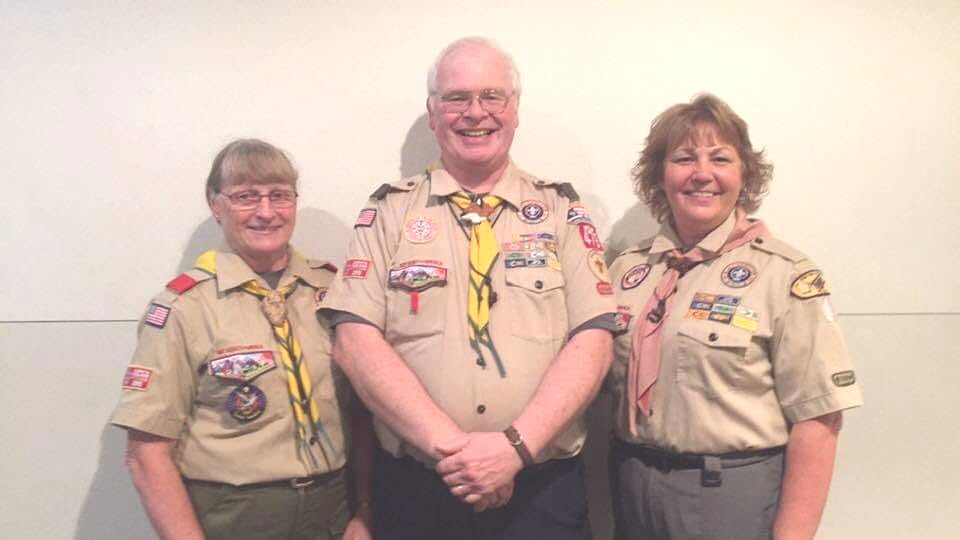 Priscilla and Scott Adams, of China, of Troop #479, and Kelly Pillsbury. Scott Adams presented the report of the nominating committee during the annual meeting. (contributed photos)

Kelly Pillsbury, of Benton, was elected to serve as the Kennebec Valley District chairman on June 10 during the annual meeting of the Scouting District Committee. The meeting was held virtually and at the Viles Arboretum where social distancing was in effect.

The Kennebec Valley District Committee is comprised of volunteer Scouting leaders tasked with growing and delivering quality Scouting programs in Lincoln, Knox, Kennebec, Somerset and Franklin counties. Pillsbury is the top volunteer Scouting leader of the district and her job is to motivate a talented team of people. District chairs preside at district committee meetings and represent the district on the council executive board. The district committee includes subcommittees for Scouting Activities and Program, Advancement and Recognition, Camping, Fundraising including Friends of Scouting and Popcorn sales, Health and Safety, Marketing, Membership for new Scouting units and membership growth, Nominating Committee, Training, etc.

“Kelly brings a great deal of knowledge and experience to the job,” said Ryan Poulin, of Sidney, who served on the nominating committee that made the selection. “I am anxious to see the great mountain tops she will lead Kennebec Valley District Scouts to during her term.”

Pillsbury has a BS from the University of Maine in business management and an MBA from Thomas College, in Waterville. She is employed by Maine Dartmouth Family Medicine Residency, in Augusta. Pillsbury joined Scouting in 1995 as a Tiger Cub parent in Pack #471, Fairfield, and has held several positions including Advancement Chairman, Den Leader, Pack Committee Chairman and Assistant Cubmaster. Kelly joined the Kennebec Valley District Committee in 2004, serving on several committees and as committee chairman in 2009-2010. She also served as the Cub Scout Roundtable Commissioner 2011-2012.

She earned the Commissioner Key and was awarded the District Award of Merit- the highest award Scouting can bestow at the district-level to a volunteer. Kelly also had the honor of serving as an Assistant Scoutmaster for the Pine Tree Council contingent troop that attended the National Scout Jamboree in 2005. She has also served on the council’s national jamboree committee in 2010 as well as Maine Jam program staff in 2007 and 2013. Pllsbury has also completed the Greenwood Ranger training, University of Scouting and Wood Badge. She has taught several University of Scouting courses and served on Wood Badge staff as Troop guide, quartermaster, course director and mentor. Kelly, who is also a Vigil Honor member of the Brotherhood of Honor Campers, also serves as Troop Committee chairman for Troop #479 in China.

Outside of Scouting, Kelly is active with the Waterville Elks Lodge #905 where she currently serves as chairman of the Antler Youth Committee and served as Exalted Ruler in 2018-2019. She was awarded Officer of the Year 2016-17, Making a Difference Special Citation 2018-19 and Mother of the Year in 2019. She is married to Bob Pillsbury and is proud mother of two sons, Richard and Connor, a daughter-in-law, Lindsey and a grandson, Silas.

The members of the District Committee also selected Bruce Rueger, of Waterville, and Charles Matthews, of Fairfield, to serve as vice chairmen. Both are former district cheirmen. “Kelly is an outgoing, gregarious, knowledgeable Scouter,” Rueger said. “She has a wealth of experience in Scouting and the community. I have worked with her in the past and look forward to doing so in the future.” Matthews echoed those sentiments. “I have known Kelly for many years. She was a committee member in my troop. I asked Kelly to take on the District chairman when I gave up the position in 2008,” Matthews said. He had served as district chairman since 2003. “Kelly is a very dedicated Scouter and I feel that she will do a great job as district chairman.”

Pillsbury’s term begins immediately. She thanked her predecessors Butch Dawbin, of West Gardiner, and Travis Robins, of Augusta, who had served as interim chairman each for several months while the nominating committee did its work.