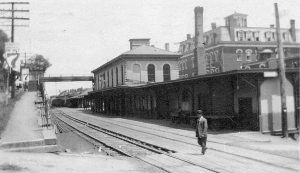 Born in Bethel in 1835, Thomas Holt was active as an architect in Central and Western Maine from 1859 to 1870. In 1865 he designed the Portland and Kennebec Railroad Station in Augusta, which burned while under construction in the city’s Great Fire that year. Between 1871 and 1876, Holt served as Chief Engineer of the Maine Central Railroad, designing railroad buildings and bridges as well as conducting surveys for new rail lines. In 1876, he moved to California, where he pursued careers in architecture, railroading, mining, and lumbering. He died in 1889 from pneumonia contracted in a blizzard in Nevada.

The KHS September speaker, a native of Portland, Maine, Earle G. Shettleworth, Jr., attended Deering High School, in Portland, Colby College, in Waterville, and Boston University and was the recipient of honorary doctorates from Bowdoin College, in Brunswick, and the Maine College of Art. At the age of 13, Shettleworth became interested in historic preservation through the destruction of Portland’s Union Station in 1961. In 1971 he was appointed by Governor Kenneth Curtis to serve on the first board of the Maine Historic Preservation Commission, for which he became architectural historian in 1973 and director in 1976. He retired from that position in 2015. Shettleworth has lectured and written extensively on Maine history and architecture and served as State Historian since 2004.

The Kennebec Historical Society September Presentation is free to the public (donations gladly accepted). The presentation will take place on Wednesday, September 18, 2019, at 6:30 p.m., at the Hope Baptist Church, located at 726 Western Avenue, in Manchester. The program will be preceded at 4:30 p.m., by a potluck supper and at 6 p.m., by the society’s annual meeting and election of officers and directors. For details about the potluck supper, please contact Anne Cough, either by email at acough60@aol.com or by phone at 582-2823.