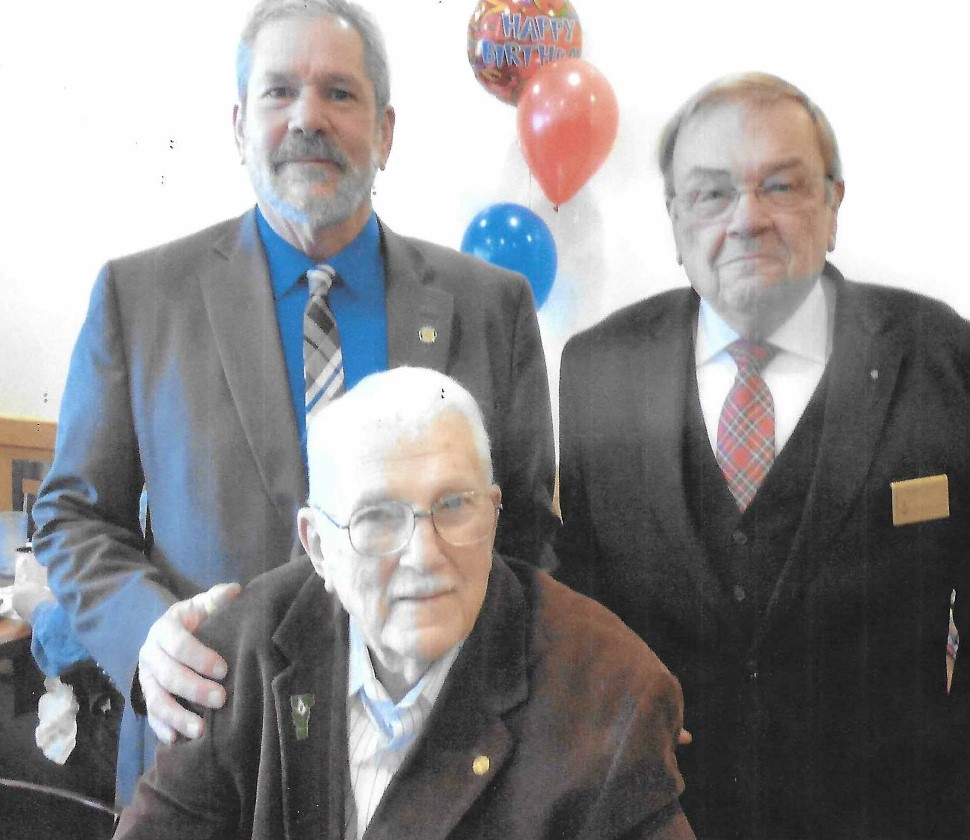 Les Ames, front, with Don Pratt, left, and Mark Rustin, grand master of the Masons of Maine, on the recent occasion of Les’ 95th birthday. (photo courtesy of Sheldon Goodine)

He started working on a dairy farm at age 10 delivering milk at 10 cents an hour. He bought his own truck and worked hauling whatever was needed to be hauled, changing out truck bodies when necessary.

On December 7, 1941, World War II was upon him, and Les was drafted in the Army in February 1943. He remembered the radio broadcast that changed his life. “I can remember that day as clear as yesterday,” he said in a 2018 interview with The Town Line. “I was still in high school. You knew things weren’t ever going to be the same,” he said. Pearl Harbor had just been bombed and President Franklin D. Roosevelt declared war on Japan. “A few of my classmates left right after the announcement” he said. His draft notice arrived shortly after his 18th birthday, February 18, 1943, but three deferrals allowed him to graduate from high school before reporting for service in the Army. He enlisted June 22, 1943, at Fort Devens, Massachusetts, and reported to Camp Croft, South Carolina, for 17 weeks of Infantry Basic training.

Four weeks into basic training he was accepted into the Air Corps Flying Cadet program in Lynchburg, Virginia. “The Air Force had more planes than pilots,” Les recalled. In March 1944, his flight training came to an end when he received a telegram from General “Hap” Arnold, commanding general U.S. Army Air Force, saying, “you are further relieved from Air Force training for the convenience of the government.”

There were too many pilots and infantry divisions were needed for the escalating ground war in Europe. Assigned to the 78th Infantry Division, attached to the 310th Infantry Battalion, October 1944, found him on a Liberty ship headed to England and spending a month in the English coastal resort town of Bournemouth, practicing amphibious landings in preparation for a beach landing at Le Havre, France.

Heading north through France, Belgium and into Germany toward Aachen, he told of traveling on mud roads and along hedgerows so thick a tank would stand on end when it tried to penetrate the dense growth along the road. He spoke of the constant cold, of having no shelter from the winter weather, of K-rations instead of hot meals and of the increasing incidents of trench foot that made walking painful and difficult for the soldiers.

Wounded on January 7, 1945, when a piece of metal shrapnel went through his right arm severing bones, nerves and tendons before lodging between two of his right ribs, he was evacuated from the battlefield through France to England and eventually back to Fort Devens, where he had joined the army two years before. Thirteen months after his injury a surgical team from Walter Reed Hospital reconstructed his right arm. “It (the surgery) was very successful, although it left me with my right arm three-quarters of an inch shorter than the left which plays heck with my golf game,” he said. After medical discharge in August 1946 he attended the University of Maine under the veteran rehabilitation program graduating with a degree in mechanical engineering.

His medals for service during World War II’s Ardennes, Rhineland and Germany Campaigns include the Purple Heart, the Bronze star and the Combat Infantryman Badge.

Les returned to Maine and graduated from the University of Maine in 1950 as a mechanical engineer. The same year he married the love of his life, Faith LaFleur Ames. They had two children, Michael R. Ames, a retired teacher who now lives in Newport, and Pamela J. Ames, an attorney, in Waterville.

Les and Faith made their home in South Portland, Omaha, Nebraska, and Cumberland Center. Les worked for American Can Company starting in July 1951 as a professional engineer and retired as plant manager of the Casco Bay plant, in Portland. Les and Faith retired to their home, in South China, where Les lived right up to shortly before his passing.

Les enjoyed the family camp on China Lake, and as an active resident of the community, was a member of the South China Community Church, a member of the Boynton-Webber American Legion Post #179, a Shriner and a Mason for 72 years.

Les was trail master for the Maine Snowmobile Association for many years and continued distribution of trail markers to snowmobile clubs all across Maine.

Les and Faith were instrumental in the resurrection of The Town Line newspaper in March 1999. Due to financial difficulties, the paper was shuttered in October 1998. Having established nonprofit status, Les and Faith donated the funds necessary to begin the process of reviving the community paper. In so doing, they became the first donors to the newspaper, and charter members of the organization.

For years, Les was the “official” China Lake ice out judge for The Town Line newspaper, working anonymously in that capacity.